Norquist, a proponent of removing unsightly locally divisive elevated urban freeways, was recently in New Haven calling for removing that city's Route 34 Oak Street Connector: a below-grade freeway which opened in 1959, and since truncated beneath an Air Rights parking garage, but with a cleared right of way -- asides from Pfizer's 2005 demolition special -- extending to just before the also uncompleted West River Memorial Park, initially created as a WW1 monument to be lined via promenades. 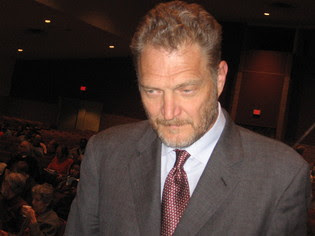 Allan Appel Photo
John Norquist tore down a “connector” in Milwaukee more than twice as long as New Haven’s lamentable Mayor Richard Lee Highway — and a viable and prosperous streetscape arose in its place. He came to New Haven to tell us how to do it.

Calling the Route 34 connector, the “Disconnector,” Norquist also provided some concrete advice: “First, don’t contemplate the project to death. It’s not going to be extended, it doesn’t justify itself by carrying much traffic. So get on with it, build the pressure, and get it done, so it can be an example to other cities, especially Hartford.”

Mayor John DeStefano wants to build over the Route 34 Connector and redevelop all the land once planned for an extended highway there.

But a co-speaker of Norquist Wednesday night, state Deputy Transportation Commissioner Albert Martin said the removal of Route 34 is by no means a done deal with his department.

Speaking with consummate diplomatese, he said, “Governor Rell’s vision of livable communities calls for an objective study of the removal of 34 to see if it’s in the best interest of New Haven.”

“I say tear it down,” Norquist replied in his remarks. “The state built it, let the state get rid of it. If you want to be nice, maybe the city can pay for the utility reconnects. But otherwise, not a dime.” 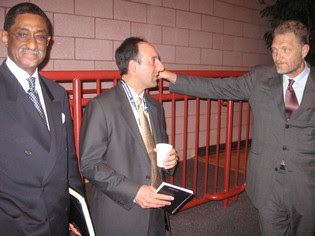 He also advised that the road should be taken down as close to I-95 as possible. “Get those off ramps tucked right next to the highway,” he said, “the way it’s done on the Dan Ryan Expressway in Chicago. So that when you get off the highway as soon as possible you’re on a viable urban grid of small streets.”

Except perhaps for Martin, Norquist was preaching to the choir about the removal of 34. It was the nature of the new space to be created, that viable urban grid to follow the removal, that was really on the minds of the audience members.

“I didn’t come here because I needed convincing to take down 34,” said East Rock Alderman Allan Brison of the Green Party. (Only two other alders, Dwight’s Gina Calder and Fair Haven’s Erin-Sturgis Pascale, were present.) “I hoped to hear what’s going to go in there. From what I heard from the city at previous meetings and the current construction makes me think it’s going to be high-end tall buildings with lots of parking.” ...

Posted by: Our Town

Beware false prophets. They talk of destroying one true transportation corridor without thought of how all that traffic will get around, just, it will be absorbed by the grid system. They talk of replacing the highway with buildings in "scale" with their surroundings. They talk of trolleys, but don't want to build to the density that would actually support a trolley system.

Some here forget that Rt. 34 is part of a regional system, it's not just for New Haven. Every city could say get your road away from here, but we all rely on the system, and we need to look beyond our parochial interests and see the big picture.

All I can say is that I don't want any of those 80,000 cars a day coming down my street. That's why the Rt. 34 highway was constructed in the first place. All that traffic was on Chapel Street and George Street. And now there's even more. What a relief to the neighborhood was Rt. 34 when it was connected along the frontage roads...Have we forgotten?

The Urban Design League needs to show how the daily I-91 traffic back up on the connector (something that Mr Norquist obviously hasn't bothered to examine) is going to be absorbed by that exit. Its completely unacceptable for that exiting to be absorbed into the East Rock neighborhood, where there is already too much traffic. Unless viable, high volume exiting is provided in the current connector location this idea is dead on arrival. Alderman Brison should acknowledge this problem because if he doesn't he is going to be a one term alderman.

How much was Norquist paid to come to New Haven and say something stupid like:

"Unaffordable rents should be. He meant of course that people do so well, they can afford more. I wouldn't worry about it. Then again, I'm not that familiar with New Haven."

According to a NHI article Re: "Pilot Hike Back on the Table"

This was an entirely appropriate question.

This is a stupid idea and I'll reiterate that anyone who thinks its a good one should drive down I-91 into 34 during rush hour and observe the volume of traffic. There is NO WAY that this can be instantly absorbed into a slow city grid without backing up traffic and causing drivers to dump into East Rock.

There is plenty of developeable area beyond Phizer and the reason that rt 3d dempo is being discussed is becuase its a classic triple dip...federal pork barrel funding for road demolition as well as road re-building and surrounding redevelopment.

How about just simply develop where there isn't a major vehicular artery?

Or, just simply build upon platforms to preserve the Route 34 freeway and extension's subterranean right of way to get the benefits of both the freeway and the new real estate development.

“I didn’t come here because I needed convincing to take down 34,” said East Rock Alderman Allan Brison of the Green Party.

It's already "down" as its a below grade highway.

Obviously sloganeering here serves as a substitute for independent thought.

Posted by Douglas Andrew Willinger at 1:48 AM