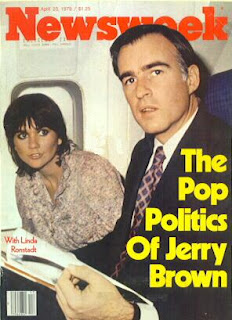 Unfortunately, about 1975, politicians and planners began to embrace the idea that we were in an "era of limits" - the notion that there were "smarter solutions," that "we can't just keep on building more roads," that "transportation demand management" could help wean Californians off their irrational "love affair with the automobile" and into "modern, efficient, high-capacity mass transit."

Then-governor Jerry Brown's aides openly proclaimed, "Our job is to pry John Q. Public out of his car (and) to make life miserable for the single motorist."

Jerry Brown, pictured above on the front cover of an April 23, 1979 issue of Newsweek magazine with the singer Linda Ronstadt, about mid way through his 1975-1983 service as Governor of the State of California; he has a long political career including service as Mayor of Oakland from 1998 to 2006, and in 2007 is California Attorney General. In 1976, 1980 and 1992 he unsuccessfully sought the Democratic nominations, and in 1982 was the unsuccessful Democratic nominee for the U.S. Senate. 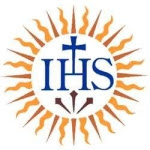 A Sampling of Attitudes Towards D.C. I-95
Posted by Douglas Andrew Willinger at 4:07 PM

So true. Reminds me of one of the best speeches I've ever read, by one of the greatest politicians I've ever come across, State Sen. Tom McClintock from California.

You can read the whole speech here: