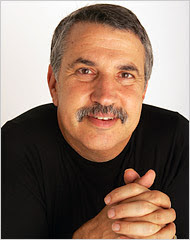 As I sat in my seat at the Bird’s Nest, watching thousands of Chinese dancers, drummers, singers and acrobats on stilts perform their magic at the closing ceremony, I couldn’t help but reflect on how China and America have spent the last seven years: China has been preparing for the Olympics; we’ve been preparing for Al Qaeda. They’ve been building better stadiums, subways, airports, roads and parks. And we’ve been building better metal detectors, armored Humvees and pilotless drones.

The difference is starting to show. Just compare arriving at La Guardia’s dumpy terminal in New York City and driving through the crumbling infrastructure into Manhattan with arriving at Shanghai’s sleek airport and taking the 220-mile-per-hour magnetic levitation train, which uses electromagnetic propulsion instead of steel wheels and tracks, to get to town in a blink.

Then ask yourself: Who is living in the third world country?

Yes, if you drive an hour out of Beijing, you meet the vast dirt-poor third world of China. But here’s what’s new: The rich parts of China, the modern parts of Beijing or Shanghai or Dalian, are now more state of the art than rich America. The buildings are architecturally more interesting, the wireless networks more sophisticated, the roads and trains more efficient and nicer. And, I repeat, they did not get all this by discovering oil. They got it by digging inside themselves.

I realize the differences: We were attacked on 9/11; they were not. We have real enemies; theirs are small and mostly domestic. We had to respond to 9/11 at least by eliminating the Al Qaeda base in Afghanistan and investing in tighter homeland security. They could avoid foreign entanglements. Trying to build democracy in Iraq, though, which I supported, was a war of choice and is unlikely to ever produce anything equal to its huge price tag.

Posted by Douglas Andrew Willinger at 1:11 AM