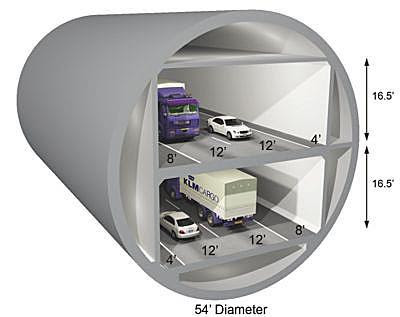 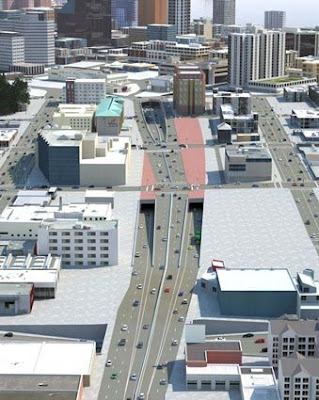 Is a single bored, two deck tube, rather then two separate single deck tubes of WDOT's 2008 planning, with full 16.5 foot vertical clearance within a 54 foot diameter.

As an express tunnel with two lanes in each direction without intermediate entrance or exit ramps, local traffic is routed through the Battery Street Tunnels to a new waterfront boulevard with the existing three lane in each direction viaduct removed.

Has the advantages over the waterfront cut and cover tunnel concept insofar that the bored tunnel is constructible while maintaining the existing viaduct and its traffic flow. Its reduction in capacity relative to the 6 lane viaduct is roughly commensurate with the split of this corridors through city traffic and local traffic, with this project providing ample accessibility by the waterfront boulevard, through with a sacrifice in speed- unless later supplemented with the cut and cover tunnel.

Talk about better connecting this reconstructed 99 corridor to I-90 and I-5 should acknowledge capacity addition stage ability, with interchanges accommodating future connections, with the Seattle 99 corridor eventually encompassing an express bored tunnel supplemented with a local access cut and cover tunnel along the waterfront.

At least one Seattle group calls for this bored tunnel to have 3 lanes in each direction, with others calling for an 8 lane viaduct, which would be less expensive but have far more construction disruptions then a bored tunnel first, with or without a parallel waterfront boulevard atop a cut and cover tunnel.

It does not appear that planning will accommodate reducing the cost of doing so via constructing the waterfront boulevard with prefabricated surface street deck segments partially pinned upon the new bulkhead walls with a shallow excavation, this first completing the waterfront boulevard and maintaining it as the tunnel beneath is excavated and fitted as a subsequent stage.

What about additional federal funding for such extra capacity as part of a deal designating it something like I-190?

The idea of better connecting it to the interstate highways, easing its use as an I-5 bypass/relief is promoted by this private citizens' group's proposal for a 6 lane (3 x 3 twin bore with a lower level for trains). 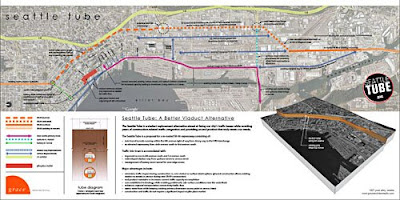 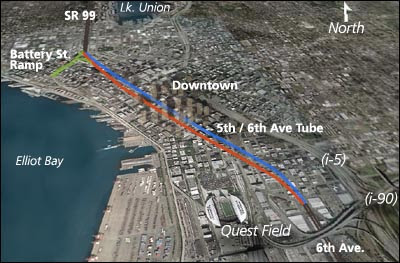