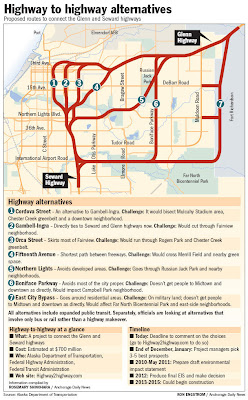 The Fairview Community Council -- in the neighborhood that would be ground zero for a freeway in the Gambell-Ingra corridor -- stands apart from the other community councils.

The Fairview council has supported the Gambell-Ingra connection since it came up four years ago.

It still supports the idea "conditionally," said Sharon Chamard, the Fairview council president. The condition is that the freeway would support the kind of development Fairview wants, she said.

As initially proposed, the freeway connection would be sunken. It would be covered over in places to allow neighborhood streets to cross it, and some other developments such as parks or commercial buildings to be built on top of it.

Fairview is already split in two by Gambell and Ingra, which are high-speed, one-way roads that can be scary to cross.

Unfortunately, as apparent from the following excerpt, the consideration appears to be that all too common zero sum equation (in a nation as rich as the U.S.!) pitting supporters of improved highways and rail transit against one another:

Michael Howard, a member of the Fairview board who lives about a block from Gambell and Ingra, says he thinks the project has been too "narrowly construed" from the get-go.

"It's being limited to where are we going to put the freeway," Howard said, when he thinks goals should be doubling or tripling public transit use, encouraging walking and bicycle riding, and building vibrant neighborhoods.

Howard is president of the Anchorage Citizens Coalition, a nonprofit group concerned with preserving neighborhoods. The coalition takes a similar stance.

Childers said the planners will consider expanded public transit -- everything from commuter rail from the Valley to the fast bus system they call bus rapid transit -- as part of every solution. And one scenario will focus on creating the kind of densely populated employment and residential areas that make public transit work best.