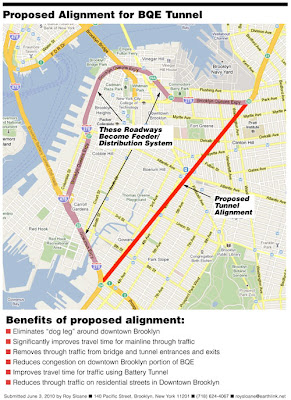 Allen Swerdlowe made this proposal at the 1997 conference of the Regional Plan Association, as an extension of the RPA's proposal to reconstruct the Gowanus Expressway southwards of the interchange with the Prospect Expressway in an all new set of tunnels.

As with the shorter NYSDOT proposal, this tunnel is constructable separately from the existing BQE, minimizing construction distributions of traffic, and allows the re-use of the that existing BQE segment as a collector distribute roadway, as an alternative to having this full set of ramps via the tunnel (making it more expensive and more likely to displace some building).

Swerdlowe reportedly opposes the re-use the existing BQE segment as a collector distributor over a beholden doctrine there should be no additional urban freeway capacity- a doctrine ignoring cost benefits of re-using existing roadways and that the additional capacity would be underground, yet pandering to those at the very top of the political pyramid with their contempt for the profane common masses cloaked in the sort of "environmentalist" anti-human ability to innovate reactionarism seen with that James L. Lee human time-bomb in Silver Spring MD on the northern border of Washington, D.C.

The re-use of the existing BQE segment, if done as discussed with re-striping it with 2 full 12 foot width lanes, plus a shoulder, from the existing 3 10 1/2 foot lanes with no shoulder, would offset the new capacity. Thereby a 6 lane version of Swerdlowe' tunnel, with 4 lanes of the re-striped BQE collector distributor road, would ideally connect to the south to a 10 lane Gowanus Expressway to the south, and to the north to a 10 lane BQE.

The existing project to reconstruct the Gowanus Expressway, either as a new viaduct or as a new tunnel envision only envision a 7 lane tunnel (3 per direction with a reversible bus-HOV lane, with space for more, though limited to the Varrazono Narrow's Bridge's 12 lanes, shared with the connections to the Belt Parkway, the southern end of which would connect with the 12 lane Verazono Narrows Bridge

To the north, the Kosciuszko Bridge segment replacement will provide 10 lanes, though has the task of carrying 2 lanes in each direction to and from the Williamsburg Bridge, hence logically leading to a project to reconstruct the Williamsburg area segment with more capacity, and as local mitigation, largely underground.

Together these would finally form the creation of a continuous modern interstate highway link from the Verrazano-Narrows Bridge to the Long Island Expressway.
Posted by Douglas Andrew Willinger at 2:49 AM