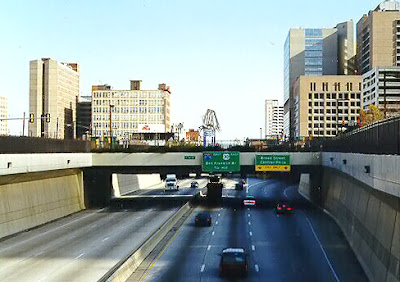 "...convert the Vine Street Expressway back into an ordinary city street"?!?!

The really disruptive freeways are the ones that divide urban neighborhoods from one another. Philadelphia’s Vine Street Expressway, a below-grade freeway which provides East-West traffic through the heart of downtown Philadelphia, is a good example. Not only does it damage the fabric of urban life north of downtown, but its chronic congestion means that it’s often not much faster than driving on ordinary city streets.

If money were no object, the best solution would be to put the expressway underground in the style of Boston’s Big Dig. But assuming that’s not in the budget, I think the next-best option would be for planners to admit their predecessors’ mistake and convert the Vine Street Expressway back into an ordinary city street. City streets take up less land than freeways, so the government could likely sell the extra land off to recoup some of the costs of the project.

The correct answer would be to cover the Vine Street Expressway, with parkland and or air right real estate development.

Posted by Douglas Andrew Willinger at 12:01 AM