All of the past proposals for a Lower Manhattan [Vehicular] Expressway have objections making them politically unpopular.

Above is the version from the early 1960s.  2 of 3 of its 'legs' - respectively its approaches to the Holland Tunnel and the Manhattan Bridge are elevated.  However, much of the approach to the Williamsburg Bridge is open depressed, only in need of a roof to become tunnels. Of this, a short -- 80 foot long and wide segment beneath the Chrystie avenue rail transit subway station was actually built in 1962.  It was done as part of the project constructing the rail transit station directly atop.

Early versions had all 3 'legs' including that to the Williamsburg as elevated.

http://www.nycroads.com/roads/lower-manhattan/
Earlier Version with Elevated Approaches including to Williamsburg Bridge

Different versions of the LME's Holland Tunnel approach featured an elevated design within a line of new buildings.

This LME would have displaced the buildings along the northern side of Broome Street.

Later 1960s versions meanwhile did go to a nearly entirely underground configuration, though as a cut and cover tunnel that would still have displaced the row of buildings along the north side of Broome Street.   By July 1969, New York Mayor Lindsey would declare the LME and the entire list of other planned yet to be built vehicular expressways "dead for all time".  That would be despite his promotion of underground design solutions for such proposed links as the LME and the Cross Brooklyn Expressway

Still there would be a successive effort to promote the LME after 1969.

However its final' versions, at least of those solicited by serious money as the Ford Foundation, was something arguably designed to further de-popularize the LME: the Paul Rudolph design.  That is the design with its 'blade-runner' extreme accompanying building architecture meant to distract from the short-comings of this particular highway design, with vast open -- yes, uncovered -- trenches with space wasting sloped walls rather than say an extra lane per direction, by overwhelming us so that we hopefully forget that this version, like every verion AFAIAA ever proposed, all would have torn a swath through historic SoHo by displacing all those buildings along the north side of Broome Street.

Though much of the opposition to the Expressway was its displacement of the highly desirable Cast Iron buildings, not even the Ford Foundation funded design exercises achieved sparing such buildings. 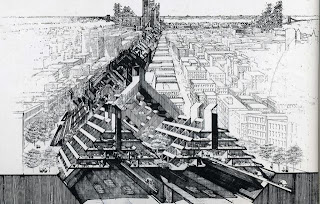 Yet there were also contemporaneous covered with new yet not radical  building versions.  One such proposal exists of an isometric framed watercolor illustration showing the eastern tunnel portal of an underground LME at about Essex Street, with a cut and cover demolish and replace the buildings atop.  Such is much like what we see along and near the Houstan Street area that were demolished and replaced with new buildings, except of course with the greater setback from the street. 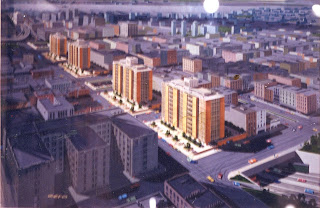 That version shows it connecting with elevated segments.  None of the buildings that would be displaced by this Williamsburg Bridge approach 'leg' are 'Cast Iron', even though along the north side of Broome Street, even a block or so west of the 80x80 foot segment of the freeway constructed in 1962 beneath the subway station beneath Chrystie Street.  However this design still had the other LME segments as elevated designs, with the approach to the Holland Tunnel also with new buildings atop, but alas displacing the historic cast Iron buildings along the north side of Broome Street.

So to a take the LME design process further in accomplish that, pair this eastern cut and cover segment with a western segment as a 2 level tunnel directly beneath Broome Street and its sidewalks, from about the Bowery to West Broadway and then turning beneath Watts Street, with the connections to an expanded Holland Tunnel with added outboard tubes.

In lieu of the elevated segment to the Manhattan Bridge, it may be preferable to instead construct a secondary tunneled LME segment beneath Canal Street, perhaps with a new tunnel continuing beneath the East River.

Definitely should be built, but as we all know in reality not much ever gets built especially in NYC. Kind of like proposing a subway to Mars. The people really need and deserve this and we all dream it, this pie in the sky.

A major problem are the political funders who face the lower 2/3rds of Manhattan's Central Park... they have a grossly insufficient appreciation for transport, so much so that their environmentalist and transportation 'advocacy' groups even dropped the ball on Tappan Zee freight rail.