Out Of Manhattan; Disproportionately Through The Bronx

Bob Dylan's recently found apparently un-sung song against construction of the Lower Manhattan Expressway at a time of planning by Robert Moses, who opposed the necessity of such highways as tunnels to shield the adjacent-nearby neighborhoods 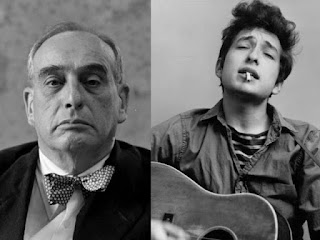 Listen Robert Moses, listen if you can.

It's all about our neighborhoods that you are trying to condemn.

So take your superhighway and keep it out of town.

We're fighting for our rights and we won't be moved.

We're fighting for our rights from our heads to our shoes.

We're fighting for our homes and we aren't going to lose.

For twenty years there's been a shadow hanging round

That any day the bulldozers will throw our houses down.

We're going to lift the shadow once and for all good

We don't want a superhighway, we want a neighborhood.

Some of use are young and none of us are old.

But none of us like to be thrown out in the cold.

Are we squatters in the city that we are living in?

Will we stand up for our rights or be scattered in the wind?

Up and down Mulberry, Delancy Street, you hear our voices sing.

From Elizabeth to Thompson, to Varick Street and Broome.

We're trying to have our streets from that superhighway down.

Too many other people have been driven from their doors

To make room for some highway or else some fancy stores.

They've been forced to leave their homes and all their roots

And dwell in housing projects, the reservation kind.

Its time to make a stand, it's time to try and give

This here neighborhood of ours before it lands down in the grave.

So hold up your banners and raise them to the wind


We'll stand here and fight, and fight until we win. 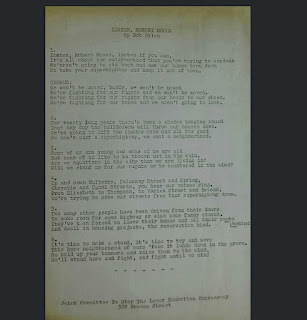 Posted by Douglas Andrew Willinger at 1:56 AM