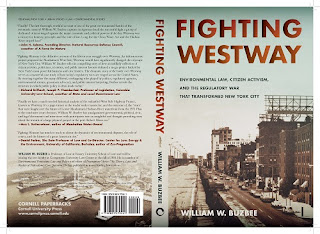 I was one of the lawyers who represented the New York State DOT in this case. Mr. Buzbee reached out to our team a grand total of once while researching and writing this tome. His bias in favor of the plaintiffs is obvious, as is his lack of understanding of all of the issues. In short, the book is neither honest nor accurate, and I reject it as the sort of drivel that only encourages pseudo-environmentalists to litigate in order to block progress. - Bruce Margolius


totally misrepresents the cost issues regarding the relative complexities of the Boston CAT project and Westway.

brushes aside considerations of engineering

feeds the myth of highways vs transit rather than transportation infrastructure versus things as the ruinous and wasteful drug war.

Buzbee uses archival documents and interviews with stakeholders to dissect the legal, environmental and political battles over Westway, the most expensive federally financed highway of its day and a project that would have involved massive landfilling in the Hudson River. It was a struggle that lasted 14 years, involving direct citizen protests and activism, Congress, presidents, agencies and several court trials. It pitted senators, mayors and the editorial boards of the New York Times and Daily News against scientists, federal agency staff and citizen activists and their lawyers. Buzbee uses the Westway battles to illuminate the strategies and elements of high stakes regulatory wars. Although many books have been written about the law, few illuminate the strategies and choices at play in common but complex high stakes regulatory conflicts that often involve society’s most fundamental political choices.

“Westway’s defeat remains shocking to its champions, especially considering the power of its supporters,” Buzbee writes. Although Westway’s defeat has often been described as an anti-democratic outcome over a mere procedural snafu, or lacking merit under the law, Buzbee reveals that Westway’s battles were over high stakes. The project’s defeat was not due to “some antidemocratic fluke,” he says, but to an effective combination of citizen activism, a highway versus mass transit choice, scientific input by expert regulators, environmentally protective choices in the law and judicial impartiality. While Buzbee surveys the entire history of the project, he focuses most of his attention on the legal and regulatory battles at its endgame, from 1982 to 1985.


“The dramatic story of the battle over Westway serves as a masterful case study of how today’s regulatory wars are waged across the United States,” says Richard Briffault, Joseph P. Chamberlain Professor of Legislation at Columbia University Law School.

And John H. Adams, founding director of the Natural Resources Defense Council, says: “Finally! The first thorough, truthful account of one of the great environmental battles of the twentieth century!”

Westway would have displaced non, asides from some piers that would be demolished anyway
Westway was primarily in a tunnel encasing noise and pollution