Thinking Over the Box With Existing Right of Way

July 15, 2007
Op-Ed Contributors
Think Over the Box
By TED BALAKER and SAM STALEY

AMID the debates — and the looming deadline — over Mayor
Michael Bloomberg’s congestion pricing plans for the city, one
recent traffic measure has caused little uproar: increased
fines ($115) for drivers who block the box. Indeed, many
New Yorkers support the mayor’s plan, which means that not
just regular police officers, but also the city’s more
than 2,800 traffic agents have the authority to hand out
tickets for an infraction known as blocking the box. And why
not? Few things enrage travelers more than the driver who
blocks the intersection, intensifying the already suffocating
traffic congestion.

But the truth is that while this plan may satisfy revenge
fantasies and increase city coffers, it won’t loosen gridlock’s
grip. It may even tighten it.

Blocking the box isn’t a law enforcement issue that
Mayor Bloomberg can address by simply having traffic agents
mete out punishment. It’s a traffic management issue that
represents political neglect of the road network. Drivers
aren’t letting their cars sit in the cross hairs of oncoming
traffic out of spite. They don’t relish the cursing, honking
and fist shaking aimed at them. Like everyone else in the
standstill, they’d prefer to be moving. But there’s just
nowhere to go.

Much of Manhattan’s congestion stems from vehicles passing
through the island on their way to destinations outside or
on the outskirts of the borough. These travelers would love
to bypass most or all of Manhattan, but the roadway network
won’t allow it. Instead it crams motorists together, turning
crosstown travelers into box blockers.

So, here’s the question: If straphangers can choose between
local and express service, why can’t motorists? In cities all
over the world and even in the United States, drivers can choose
to drive up and over intersections on humps called queue
jumpers, or they can duck under intersections through short
tunnels.

Queue jumpers and tunnels could make for a good fit in many
spots throughout New York because they operate within existing
rights of way. They can also be configured for many different
types of roads, from two-lanes on a one-way street (sending
one lane over the intersection) to streets with six or more
lanes.

Just take a look at how effective the Murray Hill Tunnel is
at bypassing traffic. The tunnel, which carries two lanes of
car traffic from East 33rd Street to East 41st Street, is a
great way to avoid the congestion of Park Avenue. Now imagine
more of these tunnels and some well-placed queue jumpers and
soon you’re traveling across town, dodging red lights.

Cities like Paris, Sydney, Melbourne, Tokyo and even
Tampa, Fla., have upgraded beyond queue jumpers to provide
longer under- and aboveground motorways. Granted, much of
the metropolitan region is packed with subway and train
tunnels and other utilities, but elevated facilities need
only airspace, and wide swaths of subterranean space
remain uncluttered.

Consider the western edge of Manhattan, where there are
no serious underground obstructions from the Battery to
the George Washington Bridge. Various east-west streets
are also free of subway tunnels. In the book “Street Smart,”
one contributor, Peter Samuel, makes a sensible suggestion:
construct a truck-only tunnel that would take many
lane-cloggers off surface streets. “It would feed a
north-south truckway spine along the west side of Manhattan,
with short east-west spurs,” he writes.

Gridlock hasn’t grown fiercer because drivers have become
ruder and simply no longer care if they block the box.
Rather, clogged intersections represent a symptom of
congestion’s root cause: political neglect.

For decades, officials have failed to upgrade the road network
to keep up with a swelling population. Mayor Bloomberg has said
that the city will grow by 900,000 people by 2030; if this
neglect continues, it will generate even more gridlock. Over
the next 20 years city forecasters expect automobile traffic
to grow by 10 percent and freight traffic to increase major
transportation recommendations in the city’s long-range plan,
not one would significantly increase the road system’s
capacity.

Mayor Bloomberg’s ironfisted approach to intersection blockers
not only allows an outdated roadway system to grow more
antiquated, it may also erode support for congestion pricing.
Cities like London and Stockholm have found it easier to sell
the public on congestion pricing when road projects are a part
of the deal, and New York should follow suit. After all, most
of those who would pay the $8 congestion toll — if the plan
is approved by Albany in time to meet tomorrow’s federal
deadline for a grant of about $500 million for the
program — aren’t out-of-towners, they’re the mayor’s own
constituents.

As we await news from Albany, many remain suspicious of
congestion pricing, and they won’t take kindly to additional
measures that cast drivers as scapegoats. Promising to devote
some congestion pricing money to building queue jumpers may
win over fence-sitting motorists, not to mention bus riders
who would enjoy bona fide express service.

Ted Balaker, a fellow at the Reason Foundation, and
Sam Staley, the director of the organization’ s urban and
land use policy, are the authors of “The Road More Traveled:
Why the Congestion Crisis Matters More Than You Think, and
What We Can Do About It.” 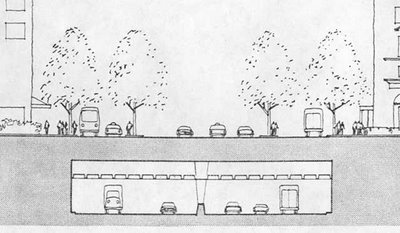 The N.Y.C. Manhattan West Side Highway Tunnel for trucks is a logical start as a modularly upgradeable-expendable system over time. Its connections to the various cross river tunnels needs considerable consideration, including that to the Brooklyn Battery Tunnel (and hence, included in the WTC area reconstruction in a "deep" configuration beneath an underground pedestrian concourse near to the surface).

Logical additions would include a 4th tube for the Lincoln Tunnel, and at least a pair of new, modern specification 2 lane tubes paralleling the Holland Tunnel.

Regionally, it should be accompanied by the Gowanus Tunnel Project (with a tunneled extension north-easterly to bypass the Promenade), along with a Cross Harbor-Brooklyn Highway-Railway Tunnel from I-78 in New Jersey to the Conduit Avenue corridor (with Interboro spur), providing a valuable evacuation route from Long Island.
Posted by Douglas Andrew Willinger at 1:09 AM