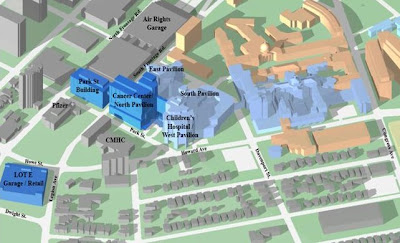 Route 34 Freeway Chock:
new development
that could have accommodated subterrain freeway extension
but which does not
thanks to Yale University selfishness

Official planning claims to to seek a more pedestrian friendly New Haven Route 34 corridor, particularly in the area around York Street which crosses over the freeway beneath the Air Rights garage.

Yet such planning truncates the freeway to the east, placing the full direct stream of freeway traffic upon the frontage road along this garage in the area with the greatest need for pedestrian cross connectivity.

It can not turn back the clock to eliminate I-91, I-95 and their connecting interchange.

Yet it blocks a short extension of the subterranean freeway that would allow a greater dispersal of traffic and allow it to continue below ground to the west of this area of proposed pedestrian connectivity.

And it seeks to attract even greater amounts of vehicular traffic with massive new real estate development (far larger than the pre-existing residential neighborhoods) with large amounts of parking.

Could the 'planners' ' responsible of failing to require these new buildings to be built with subterranean passages for the highway extension be somehow held liable by the families of pedestrians injured or killed in the area around the garage? 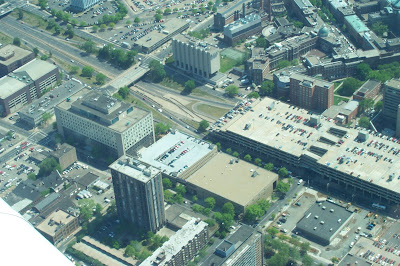