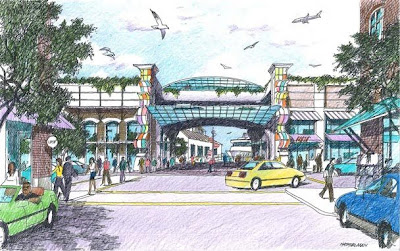 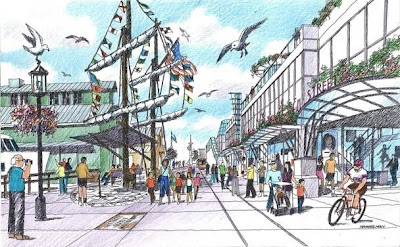 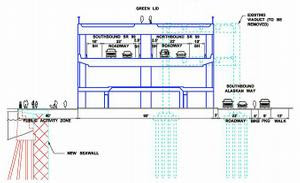 I have to say...: ...I actually REALLY like this plan. As a Seattle transplant, one of the most awesome things that I've loved about this city is it's uniqueness to expose people to its natural and architectural beauty in some of the most unexpected ways.

I was disappointed to hear that so many people hate the viaduct - it is one of the things that help keep my sanity going to and from work, being stuck in traffic. I LOVE driving along the waterfront, seeing the City, the Olympics, the Water, the greenery, all in one breadth.

I think this plan beatifies an ugly, much needed replacement of the existing structure, and also makes it multi-functional. It addresses the need for a more pedestrian-friendly atmosphere along the waterfront, while preserving the uniqueness of this vehicle thoroughfare.

I actually think it's a great compromise for both ends of the argument. It disappoints me that so many people here are against any sort of compromise...if it's not exactly their way, then it's a horrible idea...disappointing!

chopp's crime against the city: the current viaduct is simply put an urban design crime against the earth and humanity. in general we as a society have the pleasant illusion that we learn from our mistakes. chopp's proposal proves that we do not, that we have the ability, maybe desire, to repeat our biggest errors and make them worse. it is hardly worth listing the ways in which the viaduct is an assault on what should be one of the most beautiful urban waterfronts in the world. there appears to be nothing in this scheme that improves on the 1950s fecal matter that currently stinks up our city.

i will be the first in line to stand in front of the bulldozers and would recommend that the people of the city engage in a guerilla campaign to sabotage this idiotic scheme if it ever gets close to being built.

let's see: the viaduct is a hideous monstrosity separating the city from the water. oh my, lets build it bigger and uglier. i declare myself an urban designer and transportation planner. go frank!

Sorry giraf-I really like Franks idea, its the best!!!: I think Frank has a "Hit" on a design that has something for everyone. It will solve the thru put and congestion issues in the city. As for the two ground floors to be developed as commercial space all along the structure, this is another great idea.

The enclosed highway, three lanes in each direction is what West Seattle, Ballard and Communities north/south need now and in the future for jobs and mobility. Don't forget the Cruise ships are coming to Magnolia in 2009.

The big plus of Franks design is the park on the top with gorgeous sunset views of Elliott Bay, from the Pike Place Market to South King Street. This park will put Seattle on the map for a destination, and tourist will come from around the world for this view park. This park will keep the views we love and have now from the Viaduct.

Another important part of Frank's design is that SR-99 traffic will stay off surface streets and make Alaskan Way more pedestrian safe and friendly along with a lot less auto noise.

Franks idea works for the region, verses Seattle's Condo development plan, that will put a wall of condo's three times higher on the waterfront, with no parking, a tourist trap and views only for the wealthy owner's that live downtown. Frank is doing the right thing for all the right reasons..

great idea: This viaduct issue has been a boondoggle precisely because no one has stepped forward and shown any vision or leadership. Rep. Chopp is using his considerable power to bring forward a plan that is compelling and visionary. Is it perfect? Nothing is, but it incorporates so many elements into such an interesting whole that we must take it seriously. I love the idea of a park that finally takes advantage of downtown's incredible views. And can you imagine Seattle's downtown known for something more than an ugly, decaying viaduct? This city has been stagnant for so long. We need something big and different and exciting. That's what Chopp's plan is. A politician finally stepped up to the plate.