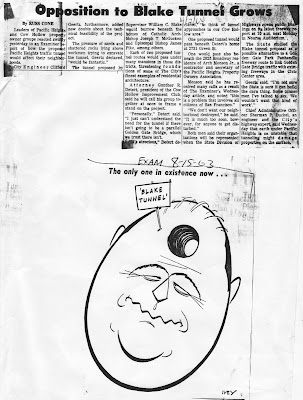 The proposed Pacific Heights Tunnel would have connected the 101 Central Freeway with the approaches to the Golden Gate Bridge, via a diagonal route via moled tunneling. It was a baby of San Francisco City Council member William C. Blake, an opponent of the primarily double deck elevated freeways.

Its most prominent detractors included those who feared its construction would undermine the foundations of their mansions above, owing to the soil conditions and the contemporary development of such tunnel excavation. Amongst these persons mentioned were Roman Catholic Church Archbishop Joseph T. McGucken, and Episcopal Bishop James Pike.

The newspaper depicting Council member Blake with a hole in his head is the San Francisco Examiner, established in 1865, and starting cir. 1887 was owned by notoriously pro-Vatican William Randolf Hearst.
Posted by Douglas Andrew Willinger at 6:51 PM