Groups as the Tri State Transportation Campaign Streetsblog and Mark Groton's Streetsblog Sell the Bronx Short for speeding cul de sac waterfront along wall of the existing elevated highway, that will hem in the Deegan, intensify traffic congestion -- remember that the Nov 2009 NYSDOT decision is to NOT preserve space for the ramp widening by allowing development placing some 10,000 new residents adjacent to this highway which should be buried and filtered -- hence instead maintaining this devise elevated highway for the next half-century.

Such planning that hems in the highway makes burying that highway far more expensive to construct- a matter officially UNconsidered.

Such is but what could become a future text book example of an intrinsically detrimental dogmatic stance against highways here used to prevent them from considering more environmentally friendly highway designs- such as the concept of filtrated tunnels, for what would be the I-87 Cromwell Avenue Tunnel.

Cromwell Avenue runs from Yankee Stadium at a southwesterly angle towards and then along the riverfront, parallel and actually closer to the adjacent River Avenue, ending unceremonially beneath the existing I-87 viaduct, running into Exterior Street which continues southward paralleling the southbound side of I-87 as its service road, that’s fed by the southbound ramp from I-87 just north of the intersection/interchange with 138th Street, where this off-ramp and service road traffic has a traffic light intersection traffic often backs traffic onto I-87.

Immediately south of this interchange where I-87 transitions to a short underpass, I-87 curves to the east, rising up again as an elevated highway before encountering higher topography where it becomes depressed passing beneath Willis Avenue. Much of the southbound I-87 Deegan off-ramp traffic at the interchange with 138th Street continues ‘straight’ along the Deegan service road in order to make the right turn onto the Willis Avenue Bridge into Manhattan.

Project would reconstruct Cromwell Avenue, and area surface streets with this segment of I-87 to run in new cut and cover tunnel extending from approximately 150th Street southward to reconstructed underpass beneath 138th Street. Project would take cost advantage via being built BEFORE mass development, employing existing industrial properties alongside the existing I-87 (further facilitating construction by allowing maintaining traffic) for constructing the new southbound I-87 tunnel box, which would temporarily handle both directions of traffic while the existing I-87 viaduct is torn down and the northbound box constructed.

Project would likewise submerge the new widened ramps, while providing a tunnel box conduit for the straight through southbound service road traffic to bypass the surface on the way to the Willis Avenue Bridge, providing for a southern extension of Cromwell Avenue atop and then swinging to the south side of I-87 as it turns east, improving pedestrian accessibility to the waterfront with the tunneled southbound ramp, and overall local accessibility towards the southernmost waterfront with the Cromwell Avenue extension. Project would include I-87 reconstruction with sections of urban decks atop I-87 between 138th Street and the Metro North RR there terracing down towards the waterfront, and in the vicinity of Willis Avenue. The I-87 Cromwell Avenue Tunnel would effectively extend continuously from about the Grand Concourse to approximately 150th Street on the approach to Yankee Stadium[s].

Project would open up acres and acres of new land for public use and private development, with footings designed to support development (buildings) atop the highway tunnel to hence allow greater developable square footage, with funds from the sale of air rights. It would also reduce air pollution by employing a tunnel’s ability to trap emissions with filtration systems, respectively locally and regionally with increased capacity for the ramps (needed to address the current levels of congestion and the future levels of traffic at that 138th Street interchange with 10,000 new residents within this new Harlem Riverfront Development), and the mainline (with a minimum of 4 lanes in each direction for its importance and scarcity as a major north-south artery into NYC and through the southern Bronx, feeding Queens County, Long Island and beyond via such things as the Hunts Point Terminal, a major industrial area featuring not only numerous scrap yards, but also the large food distribution businesses that live off of truck accessibility, particularly as a parallel alternative to the underutilized Sheridan Expressway which requires such traffic to also use the highly over-utilized western portion of the Cross Bronx Expressway. As widening that later road would be far costlier, and displace thousands of residences, encouraging some of its traffic to divert to a widened lower I-87 that ran in a filtrated tunnel continuously southward form say 150th Street to the Metro North RR would reduce traffic emissions, and hence asthma rates, not even taking into account the increasing prevalence of cleaner and cleaner automobiles.

A project precedent, in design and size: Cincinatti, Ohio’s waterfront interstate highway ‘Fort Washington Way’ reconstruction, which replaced a 1950s design 6 lane depressed freeway (with sloped embankments and frequent ramps) with a 1990s design 8 lane depressed freeway within a ¾ concrete box with vertical retaining walls designed to support the addition of a roof to make it a full cut and cover tunnel. This stageability makes it more affordable over time. 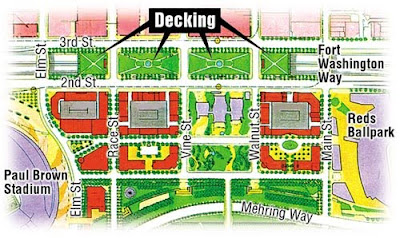 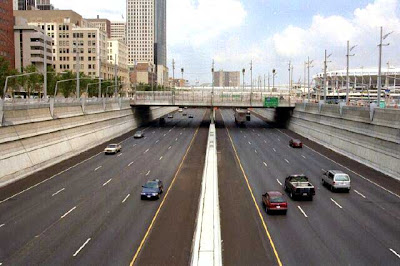 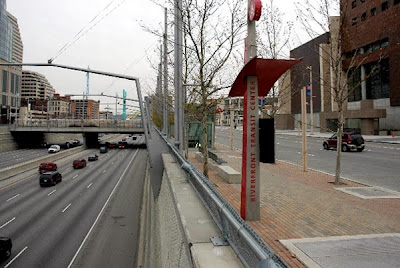 The City of Cincinnati tapped PB for a $150 million reconfiguration of the 1.5-kilometer (0.9-mile) Fort Washington Way interstate connector. As the city reconsidered the project, it added an additional $160 million of new viaducts, ramps, improvements, watermain replacements and an underground transit center—without extending the original schedule. 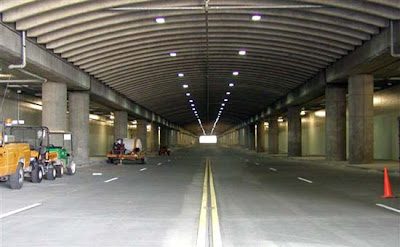 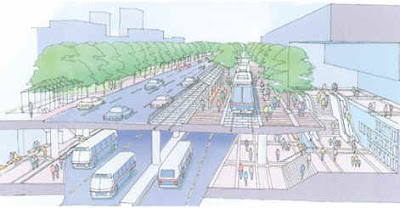 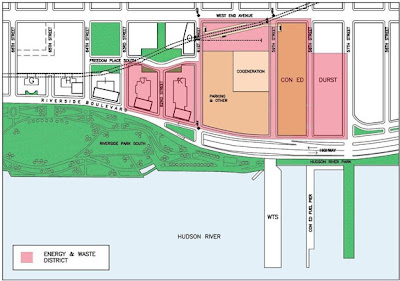 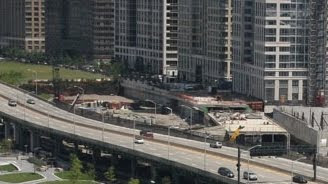 Tunnel box allows superior space utilatilation for freeway and adjoining developement, with sound containment of tunnel ideal for accomodating greater real estate developement within close proximity
The NYC area is hardly altogether unfamiliar with the concept of building highway below, notably with portions of the East River (FDR) Drive as well as the now under construction Riverside South Boulevard extension box tunnels for the future relocation of the 9A Henry Hudson Parkway. As such it has had proposals for so effectively burying significant segments of essentially that latter highway’s southern extension (the 1974-1985 ‘Westway" project of the West Side Highway largely in concrete box tunnels through new landfill), and later for that same highway’ continuation from Manhattan (2002-2005 proposed ‘West Street Tunnel’), and into Brooklyn (the 1996+ Gowanus Expressway Tunnel project then championed by the Regional Plan Association, and even written about favorably by such organizations as Tri State Transportation Campaign, that was to be routed paralleling the existing highway viaduct beneath 3rd or 2nd Street, but now planned instead to run directly along the waterfront. All said and done, it has been the Riverside South project that has began, with its favorable attributes rendering its construction to be relatively inexpensive. Its advantages included:

- out of the way of traffic
- no utility relocation
- no excavation, as a concrete box on land, with its open space to the west sculpted with earthen fill creating a sloped hill – a grassy knoll – up to the Riverside South Boulevard now on the surface.

Funding the tunnel shell now (rather than building it in 10-15 years from now) will:

• Avoid the disruption to the local community resulting from the need to dig up part of the new Riverside Boulevard and the newly constructed Riverside South Park in order to achieve the relocation;

• Save $50 million by avoiding the costs to dig up and rebuild Riverside South Park and Riverside Boulevard; and

Significantly, with the $110 million savings ($60 million contributed by the developer and $50 million in savings) resulting from the early construction of the tunnel shell, the cost of the refurbishing alternative and the relocation alternative will be approximately equal.

The immediate funding needed to complete the southbound lane of the tunnel shell between 62 nd and 67th Streets before building the park, is about $94 million. This project is shovel ready and should be considered for funding under the Federal stimulus funding program and/or the City should require Extell to provide funding for the for the relocation. We have asked the Governor and the Mayor for the funding to build the tunnel shell in coordination with construction of the buildings and park by the developer - the work that can be completed during the next two years.

Through the efforts of a bipartisan group of Congressmen and Senators (including Senators Schumer and Clinton and Congressman William Green, Sue Kelly and Jerrold Nadler) over several years, $21 million in Federal earmarked funds have been made available. $5.7 million has been spent on the EIS and engineering work and $15.3 remains available. We need the cooperation of our senators and congressman to make these funds available for building the most southern section of the tunnel shell and the park, which will not be completed during the next two years.

That contrasts favorably with the 2002-2005 NYSDOT designs for the proposed "West Street Tunnel", a cut and cover tunnel beneath an existing street, with its significant utility conflicts increasing the construction costs, notably a sewer pipe that actually could have been avoided.

An I-87 Cromwell Avenue Tunnel (I-87 CAT) enjoys the most favorable combination of factors of any tunnel requiring excavation.

- out of the way traffic, via staged construction starting with new southbound I-87 CAT within the now lightly developed industrial properties alongside I-87’s western (southbound) side.
- Little or no additional utility relocation or building removal as the I-87 CAT Project employees the footprint of existing industrial land that has been recently re-zoned for high rise development, with its cut and cover design accommodating footings for maintaining planned developable square footage.
- Opportunity to reconnect lower Grand Concourse area up to the Yankee Stadium Park with the waterfront via I-87 CAT
- Opportunity to reduce air pollution via highway tunnel filtration, locally in the vicinity of Mott Haven, and further away particularly along the western portion of the stressed Cross Bronx Expressway, as an alternate route to the Hunts Point area then the former which is used in conjunction with the Sheridan Expressway.
- An opportunity hence to improve in every way a critically important north-south highway into NYC.

All of these benefits are thwarted with NYSDOT’s reported November 20, 2009 decision to defer any increase in the capacity of the I-87 ramps at its interchange with 138th Street until after the area is built out. Note that the proposed development district extends right up to the edge of the existing I-87 viaduct, leaving precious little space for ramp expansion, only worsening the congestion and pollution along a 1930s design Major Deegan Expressway at one of the most congested interchanges where new real estate development adds 10,000+ new residents and untold numbers of vehicles, while requiring any tunnel replacement to be built directly beneath the existing viaduct, likely increasing the costs by 100s of millions of dollars.

There’s has apparently been no consideration of a tunnelization of Mott Haven I-87, not even amongst those citing asthma rates, with no mention of tunneling nor tunnel filtration as already done overseas.

Why then not any of the highways in the Bronx?

By spouting doctrine they neglect imagination…