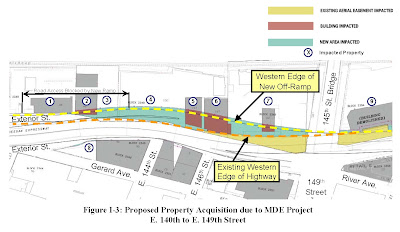 Chalk up another one to those that run things.

Despite the clear precidents nearby -- say portions of the upper East River Drive, and the Riverside South Boulevard-Tunnel project -- as well as those overseas in employing highway tunnels to reduce pollution via trapping such and treating it within filtration systems -- the people stirred to fight the NYSDOT proposeal to expand the elevated Deegan Expressway apparantly have never given any consideration to applying such for Mott Haven: instead they act as if steered to simply approve of maintaining the wall of the elevated expressway in compliance with the wishes of some factrion[s] desirious of a new pricy enclave between the elevated highway and the waterfront. They even would act as if a few hundred square feet of space at Mott Haven somehow justified chocking truck access upon an invaluable alternative to the jammed western Cross Bronx Expressway-Sheridan Expressway (the latter which they seek to eliminate) of the South Bronx's major industrial employer area- Hunts Point with its regional food distribution- somethng unconsidered by The Day After Tommorow. And everyone within the government and the well organized-orchastrated 'activist' groups, acts as if that were just so unimportant, with sloganeering a substitute for critical thinking and imagination-application.

Of course NYSDOT need not even consider the cost differences between doing a project now while there's a swath of virtually open industrial wastelands alongside, rather then a few years later with new condo towers build up to the previous building lines, hemming in expansion even for the ramps, while adding 1,000s of new redents and vehicles upon the unwidened ramps.

They apparantly don't even post the plans to the internet.

Then they notify the public through a private conversation confirming the decision, reportedly made November 20, but announced only today, 5 days later, with someone at Mark Gorton's Streetsblog.

The DOT capitulated at a meeting on Nov. 20 requested by the Bronx Borough President’s office, which brought together representatives of the state agency with staff of the city Department of City Planning department, members of Community Board 1 and local elected officials.

“We don’t want to be a bad neighbor in that area,” said Levine, the DOT’s director of public affairs. “What we heard from the community was that the widening would impede” waterfront development.

“They were very clear that at some point they will revisit the issue,” said Sam Goodman, a planner in the Borough President’s office, but not until the rezoning plan has a chance to spur development. Once the area has been built out, the state will consider its options again. In the meantime, said Goodman, other traffic-calming measures will be looked at.