Groups as Tri State Transportation Campaign and Streetsblog are fond of calling for the removal of New York City's Sheridan Expressway, largely upon the grounds that it is underutilized.

But what do they say about the reason why such traffic, particularly that going northbound, is so sparse- namely the ramp that once must use to continue northbound past the Sheridan’s northern end via 177th Street, in order to get to the northbound Bronx River Parkway? 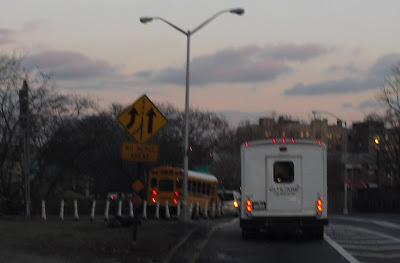 The bridge that carries this eastbound (regionally northbound) I-95 Cross Bronx Expressway service road, has a mate to the north that carries the other direction with 3 lanes of traffic, while the eastbound one has 4 lanes. As both bridges appear to be about the same width, the eastbound direction gets its 4th lane not via extra pavement but rather with lanes that are narrower. Although I have not gotten out a measuring stick, if for instance the roadways are 36 feet wide, then the westbound side has 3 lanes that are 12 feet wide apiece, while the eastbound side has 4 lanes that are 9 feet wide apiece- assuming they are all the same width. 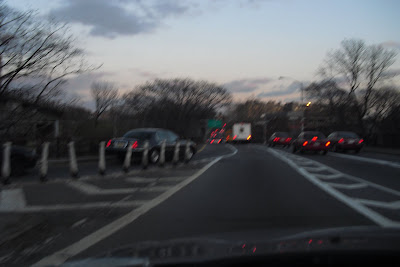 The eastbound service road bridge which cross over the Bronx River Parkway was apparently not designed to accommodate the full array of traffic flow movements that it accommodates (barely) today, consisting of, from the perspective of the photo directly above from left to right:

For whatever reason , whether the addition of one of the ramps, or perhaps an upgrading of the ramp from 177th Street and/or that from I-95 to be freeflowing to help prevent backups onto I-95, as well as to accommodate the traffic from the northbound Sheridan Expressway which ends at 177th Street with the cancellation of its planned extension to Co-Op City with NYC Mayor Lindsey’s across the board cancellation of all of the area’s planned yet not yet built highways in 1971.

The sort of attitudes behind such an across the board cancellation, regardless of the relative merits as well as the feasibilities of further design evolution to better serve both regional and local concerns, reflects itself in the accompanying disregard for the consequences of such highway cancellations, aka addressing just where such decisions will place the traffic. This ramp from 177th Street onto the eastbound service road to regionally northbound I-95, is an excellent example of this disregard, one encompassing a distain for facilitating traffic flow efficiently and safely for vehicles and for pedestrians throughout this CBE-BRP mixing area, with a continuation of merely band aid type method of simply accommodating the eastbound service road’s 4th lane by re-striping, rather then a strategic widening.

Such a widening would involve only perhaps another 12 feet of pavement, which could be designed with a cantilever to minimize reconstruction of the bridge itself, in order to provide 4 lanes each with the standard 12 foot width, for intercepting a lane apiece from this 177th Street ramp, the I-95 Rosedale Avenue ramp, the southbound Bronx River Parkway ramp, and the local road. Such a widening would take no buildings and involve land that appears to be publicly owned.

Nonetheless the authorities have simply added a set a plastic stanchions briefly separating the most serious part of the pinch between the 177th street ramp and the I-95 offramp. 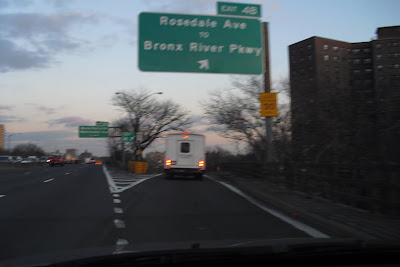 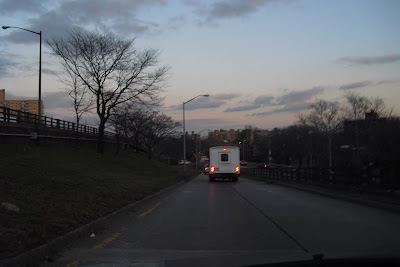 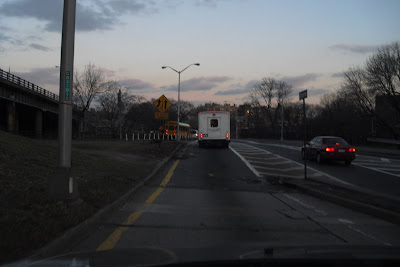 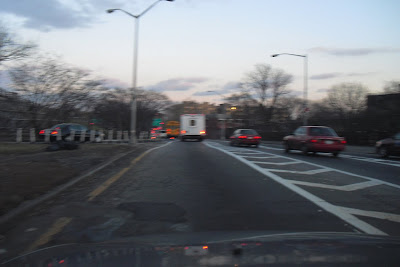 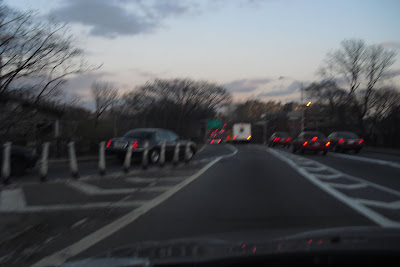 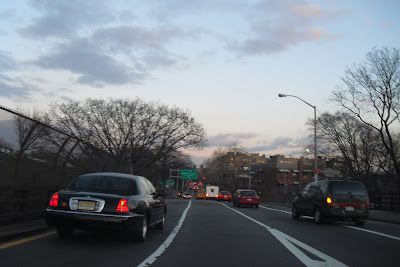 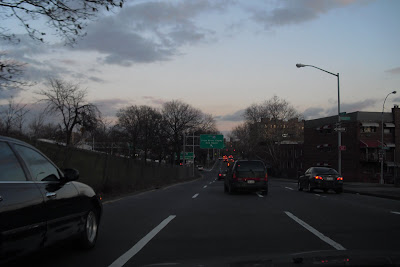 Illustrations: the pinch from the I-95 off ramp service road lane 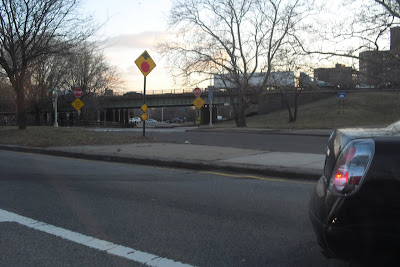 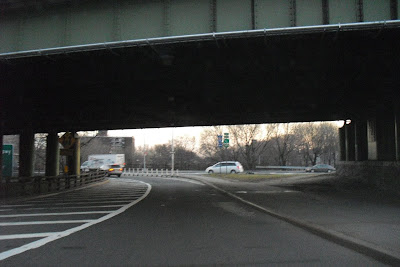 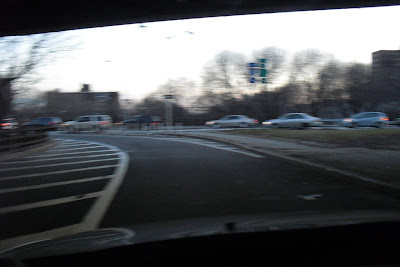 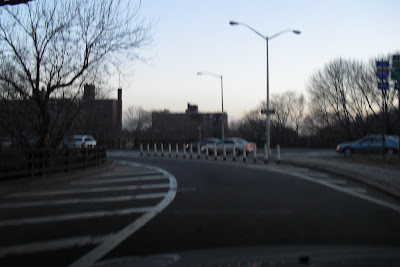 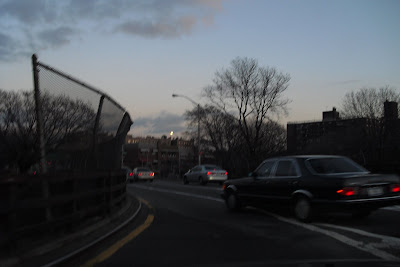 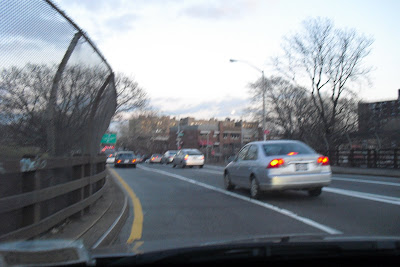 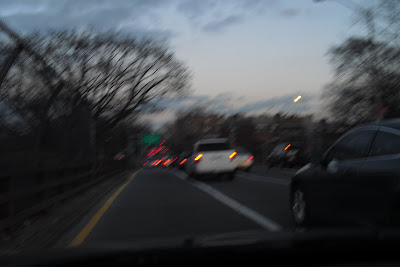 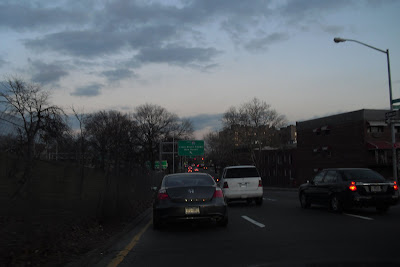 Illustrations: the pinch from the 177th Street Ramp 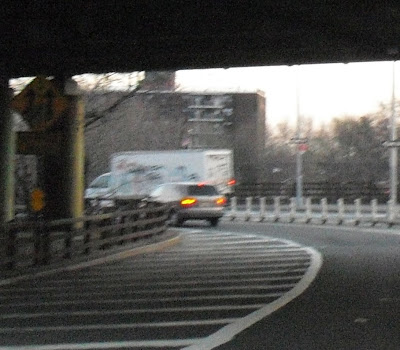 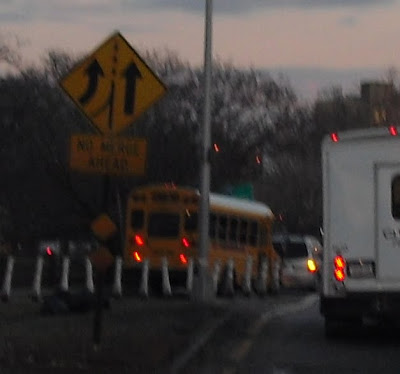 Note the signage, that this is a free-flow, without any stop signs or yield signs, but rather of two separate roadways joining into one roadway as two separate continuous lanes. 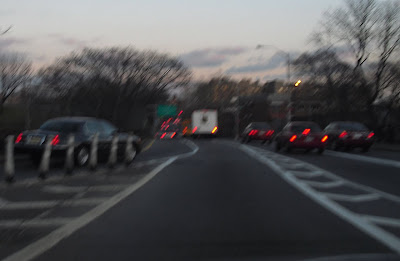 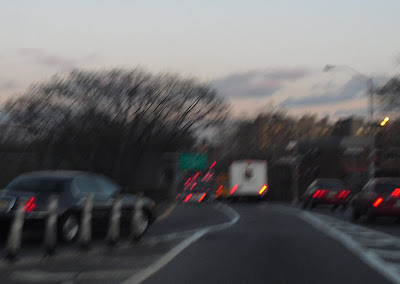 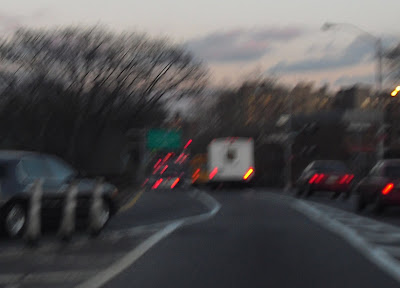 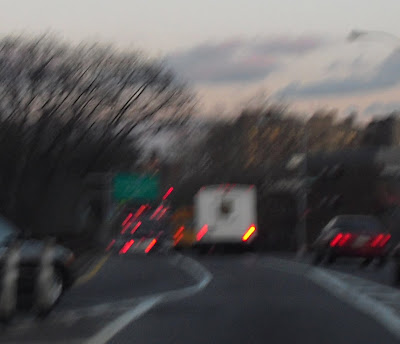 Also note, not only the substandard lane widths, but how the lanes were recently striped to indicate that the left-most lane, the ramp from 177th street, basically juts into the space that one could likely presume is the space for the immediately adjacent lane. Just imagine the confusion that can result particularly if the lane stripings are worn away.

1143: The driver of a vehicle about to enter or cross a roadway from any place other than another roadway shall yield the right of way to all vehicles approaching from the roadway to be entered or crossed.

I was the vehicle from the leftmost lane; the Officer was in the immediately adjacent lane. It was here where we both stopped in my response to his turning on his lights as we were alongside, with him informing me through a his drivers window, my passenger window conversation that I was guilty of failure to yield the right of way, and for me to follow him to the right so he could safely issue me the ticket.

On January 22, 2010 at a hearing scheduled for 8:30 AM, and which was over by 9:12 AM, the Officer would testify that I had a yield sign – wrong – and that there were no plastic stanchions between our roadways – also wrong.

Though he would testify correctly that the road had been subsequently repainted since the incident, he would mischaracterize that as a restriping rather then a repainting. The solid lines now shown appeared sometime in Autumn 2009, and match the previous dashed lane markings that existed on the nite of the incident but, for perhaps a 40 foot length of the road right at these lanes meeting where the paint was worn away. He would also testify that I came into his lane, a belief sustainable by the paint being worn away at the point later shown by the solid white line showing my lane jutting into the space that one would otherwise presume to belong to the adjacent lane.

He would testify that I was on an ally – hmm, an ally passing directly crossing beneath I-95 – before being cross-examined about whether it was in fact upon not an ally but a roadway, and hence answering that yes, that it was a roadway.

The distinction is critical because the former does not require the presence of a stop or a yield sign.

In this instance, there is no stop or yield signs, but instead a single ‘no merge’ sign showing two separate roadways, each with a single lane that each continue past the point of these roadways joining: a sign visible to the lane the officer was in.

I wonder how many people have gotten this sort of ticket at this pinch, and indeed the collision rates there, and have as a result NOT used the northbound Sheridan.
Posted by Douglas Andrew Willinger at 7:56 PM

This is a major traffic chock point in NYC that affects many people, yet there are no local comments.....

As much as it would be nice to have all of these highway upgrades, it's just not going to happen.

We're broke and with $4+/gal gasoline and rising it won't matter in 10 years anyway.