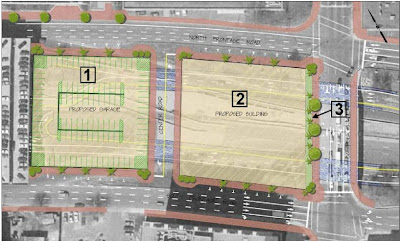 According to an article in the New Haven Independent:

The developer is Carter Winstanley.

The name of the project is 100 College Street.

It will close the segment of the route 34 freeway with its exits 2 and 3.

The Mayor intends to take this to the New Haven alderman for their approval sometime in 2010, with ramp demolition starting in late 2010 or early 2011.

This has already received $5 million in Federal funds, plus State of Connecticut approval, and is awaiting a decision upon a request for $40 million in stimulus funds.

Public response to this, from the comments section to this article, appears to be growing more negative then that to such right of way blockage projects to te west of the Air Rights Garage, given its application to an existing segment of highway.

To all of you who may think this is a good idea (removing Rt. 34), good luck to you getting around in New Haven in the future. This “re-knit the city” jargon is crap. Johnny is blindly pushing ahead without a care about how it will work. Even with the highway in place and without the development, there is gridlock in this area daily. Now we’re building more in this tight corridor adding thousands of trips, and we’re going to reduce capacity to serve it. Gateway College alone will overwhelm the street system. There is no transit component to this. There will be MORE cars on WIDER streets around the hospital. I just hope some of the “traffic calming” groups see through this and realize that conditions around the hospital will get worse, not better. Build over the highway. DO NOT REMOVE IT. You will regret this if it is built as planned.

It is not wise at all, as Our Town said to remove Rt. 34. This isn’t so much of a highway to nowhere as everyone thinks. It connects downtown and the highway to Westville, Edgewood, Whalley, yadyyadyaya. It is always crowded, it cannot be removed. This road must stay, somehow. So while we are tearing up the highway and we’ve got a big hole, lets fill it! Lets put a tunnel going from where Rt. 34 will leave off, going to the other end, towards the other end where it will leave off.

I love the idea of reconnecting those parts of the city and having a nice-looking, pedestrian friendly way for people to walk around. Also love the idea of building some new office space and residential to increase tax revenue and make it more vibrant. First and foremost I want the city to be walkable and safe. That said, I’m also realistic and realize many people commute, and we need to accommodate cars, bikes, and buses too. The idea of building over the corridor, and creating a tunnel sounds logical, as long as it could be done attractively. You could build almost anything you want over the tunnel -walkways, a park, condos, offices, etc. People needing to drive from across town to the interstate can zip through without endangering any pedestrians. A tunnel would actually remove a lot of cars from the walkable parts, rather than just slowing them down. Does anyone know if the city is looking into that? Of course if they have other plans that could truly accommodate the traffic without a tunnel, even better. But definitely dont want more gridlock, which creates more smog, etc.

While I appreciate the Utopian sentiments of those who want to do away with rt. 34, we cannot simply ignore the prospect for gridlock that these plans create. The potential for even more impediments to access to YNHH is not just a philosophical matter about privileging automobiles or bikers/pedestrians. It is a public safety issue. Any plan to redesign this corridor must absolutely assure that emergency access to the hospital is not impeded. I have not seen a word in any of these discussions about this public health issue. Apparently, it is okay for patients to die in ambulances stuck in traffic, as long as we have nice bike lanes and the cars all move slowly, if at all.

Boston downtown (I93?) works fantastically well in the tunnels exiting onto pedestrian oriented streets with ground level retail. Keep 34, fill the side, build over it and give us a tunnel. Tunnels, bridges and cities go together. We need higher density in the city and this is the right place. Over the next century the city will probably grow in two directions from downtown; South to the Harbor( Longwarf) and North of YNHH along 34 to and along the Boulevard. We need to build a smart network of roads to handle traffic volume and easy and expensive parking.

What is it? New Haven doesn’t have enough vacant land, so it’s forced to incur expensive projects and build over an existing highway?????
What about the former site of the Colosseum?

I think it’s a major mistake messing with the current Route 34. It will tighten a major artery into the city and limit options in the future. The city should have continued the highway under the air rights garage and under the Pizer building. It would have alleviated some of the traffic congestion. But it’s too late for that now. Don’t make another mistake. Bridge to the Hill neighborhood? Big woop-de-doo?!