While areas worldwide are constructing unobtrusive underground motorways, India goes in the opposite direction with flyovers- elevated roadways of varying merit, including those placed above city streets, mere feet from people's bedrooms, as this in Calcutta with the Vivekananda Road 'flyover' 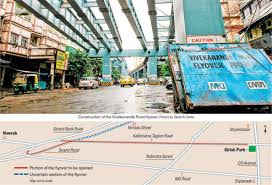 "Work on the Vivekananda Road flyover, which started in 2009, has gained pace after a long lull. The flyover, that will connect Girish Park and Nimtala Ghat Street to Howrah bridge, would allow commuters to bypass the congested Posta crossing.

Construction had almost stopped last year because of technical problems as well as objections from residents who apprehended accidents because the flyover runs close to their homes, said the authorities of Calcutta Metropolitan Authority (CMDA)."


The 1.4 mile (2.2 kilometer) long Vivekananda Road Flyover is one of a series of such elevated vehicular road 'fly-overs' constructed in India in recent years, itself being started in 2009. 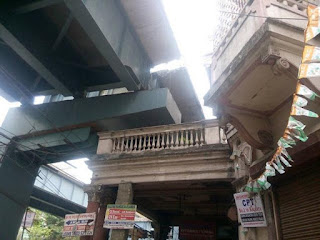 The Vivekananda Road flyover is perhaps India's most extreme example of cramming an express roadway through a densely built up urban area, and numerous other Indian flyovers seen in various articles available via the internet, such as this, appear to be far less inappropriately situated, for instance not placing motor traffic directly by people's residences.

As can be seen from a google ariel, it has two main segments that are largely completed, with a not yet finished connecting segment, that collapsed on March 31, 2016, bringing the project much new attention. 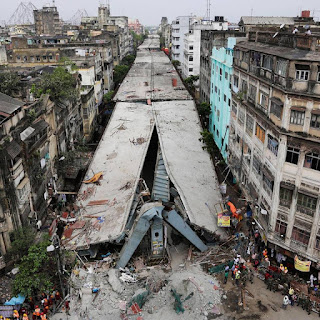 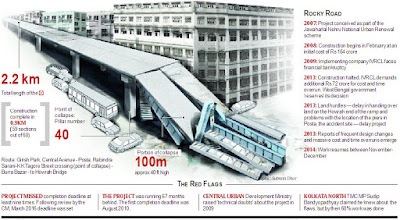 The collapse occurred at the segment where the street has a right of way kink at the intersection with  Rabindra Sarani, where the designers were thus forced to use a single vertical support with cantilevers on each side, rather than double vertical supports as done on the rest of the viaduct. 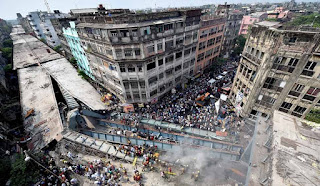 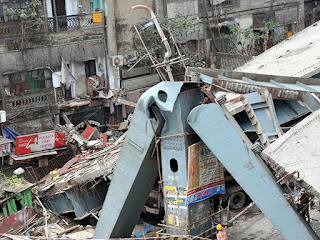 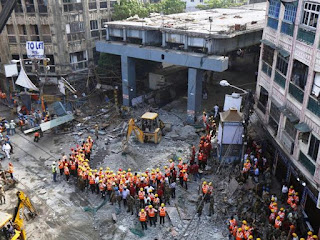 
I think it seems quite clear what the fault is that caused the overpass to collapse in Kolkata. I can see that it may have been bad welding and even more profoundly bad engineering design (or bad construction if the drawings were not followed). The right arm of the support that collapsed was constructed with only a center column and two cantilevered arms. All the others had two legs and were thus not so structurally risky. It appears that the right arm broke off first, and then the left arm – absent its counterbalancing weight – simply buckled. The fault seems to be with the engineers, and not just with the builders, as it seems to me to be a particularly weak detail that would be prone to buckling because the members that held up the whole deck appear to be made up with tubes with sheets of steel no deeper in section than the steel beams that supported the deck along its length, with their ends resting on this weak cantilevered post and beam. The bending force at the top of the column must have been terrific, but it would appear from the buckling that the bottom cord did not even cross over the top of the column, as the column penetrates through the pair of cantilevered beams to terminate at the top cord. Wow! The reports said that they had just poured the concrete deck in this section when it failed, so it was simply inadequately designed to carry the weight of the road, never mind the traffic that will eventually be on it. The anomaly in the pier design seems to be because the road went around a bend in the street with a roundabout underneath – thus they did not want two legs on the support structure, but that has proved to be a mistake of gigantic proportions. The claims that this was an “Act of God” in my mind are incredibly misleading. Signed Randolph Langenbach ()


The above statement presumes that God acts only singularly and not sequentially, but is otherwise valid.

Though the collapse occurred at this naturally more vulnerable area, the project in general, and some other flyovers, have been criticized for poor quality construction.  The culmination of factors would thus work sequentially to bring about this March 31, 2016 collapse.

Matters of construction quality asides, how appropriate are elevated above street vehicular roadways in dense residential urban areas?   Even if well designed with relatively attractive undersides with added lighting, they introduce vehicular traffic mere feet from people's dwellings, with the attendant noise and safety risk from errant vehicles, and even with well designed enclosures, are visually significant, and thus should be accompanied with monetary payouts to the affected neighborhood.

Infinitely more appropriate for such contexts would be constructing additional vehicular roadway levels as tunnels, either drilled and or cut and cover.  As a relatively wide east-west traffic corridor, Vivekananda Road arguably could use a 2 lane plus one shoulder per direction cut and cover tunnel, somewhat akin to that beneath Washington, D.C.'s DuPont Circle.  If additional capacity is needed, the tunnel could have a lower level doubling the capacity, simplified with that being for longer distance traffic to thus reduce the costs and space requirements of having full access ramps for both levels at all of the planned intermediate access points.  The initial construction costs would be likelier higher than a viaduct, thusly why the consultants involved went with a viaduct.  But would not a viaduct in such a context be costlier in reduced property values?  And perhaps a cut and cover tunnel could be accomplished more cheaply if employing prefabricated segments, and made more practical by construction staged first with the upper level as pre-stressed tunnel box segments within slurry outer supports that extend deeper to thus allow the subsequent excavation of the lower level.

Additionally, for the broader picture, cities as Calcutta could improve highway networks via a greater use of the often wider right of ways exclusively used for railroads- in ways to not merely respect of improve the railroads, but to go further and heal the urban scar of vast rail-yards that divide local areas.

For instance, to the north of this viaduct, Calcutta has a generous somewhat paralleling railway corridor, that could conceivably re reconstructed to accommodate more than the existing rail activities- adding transportation options within a new set of tunnel boxes- of a new vehicular highway, improved rail service, while providing additional amenities atop a deck over with new buildings and linear parkland for the benefit of society at large.

The new tunnel box vehicular highway could be achieved by one of several ways: a cut and cover tunnel directly beneath the railroad; one along the railroad; or perhaps as an ariel tunnel hidden within such new buildings, as done with an autobahn segment in Wilmersdorf, Berlin, Germany, or in the U.S.A. with Seattle,Washington's un-adopted Route 99 'Choppway' proposal; and such could also be adopted with a reconstructed or new rail transit line. 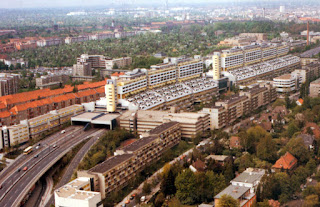 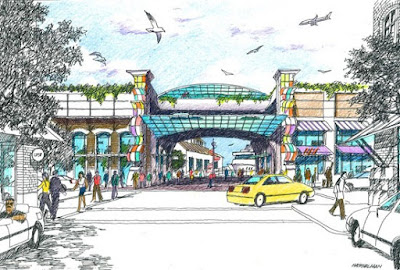 Quality of construction and design should matter to those who state to be concerned about the impacts of transporation infrastructure.

Notably, publications as Streetsblog have not had much reporting upon such projects, as if the going on in third world countries matter little to the big money behind such publications that primarily focus upon shifting traffic burden to less affluent areas.
Posted by Douglas Andrew Willinger at 11:12 PM