from a map found at this article at Wired: 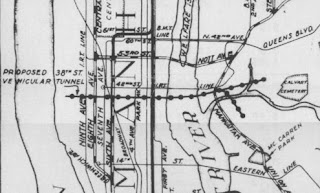 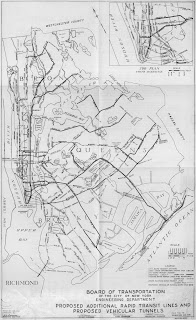 Note the additional proposed vehicular tunnel at the approximate location of the Verrazano Narrows linking Staten Island and Brooklyn.

About a Regional Plan Association proposal in 1937:

WHY NOT A MID-MANHATTAN TUNNEL? As early as 1937, the Regional Plan Association advocated construction of a four-lane, twin-tube tunnel under 36th Street and 37th Street. According to the Moses-headed Joint Study, the chief argument against the Mid-Manhattan Expressway Tunnel was its cost. This would have ranged from $119 million for a no-exit, express link between the Lincoln Tunnel and Queens-Midtown Tunnel, to $145 million for a tunnel link that would have provided entrances and exits at 5th Avenue.

The proposed construction method was described in the Joint Study as follows:


It would be necessary to build two separate tubes under adjacent crosstown streets. A two-lane eastbound tube could pass under 29th Street; a two-lane tube westbound under 30th Street. Ventilation buildings would be located in the block between 29th and 30th Streets fronting on the west side of 8th Avenue and the east side of Lexington Avenue. The least costly type of construction for such a tunnel would be the steel-bent and concrete subway-type, installed by cut-and-cover method.

The tunnel providing only two lanes in each direction would, of course, have only two-thirds the capacity of a six-lane expressway. Provision of more than two lanes in each tube is not feasible due to limitations imposed by building foundations on either side of 29th and 30th Streets and extremely high costs. Limited street access in Midtown could be provided in the vicinity of 5th Avenue at a cost that would depend on the degree to which the interchange was developed.


To accommodate future traffic along the Mid-Manhattan corridor, Moses proposed construction of a $120 million third tube to the Queens-Midtown Tunnel. The third tube, which would allow four lanes of traffic in one direction during rush-hour periods, was to be constructed in conjunction with the expressway.