'Congestion' Tax Scam With THIS Sort of Book-Keeping Tradition? 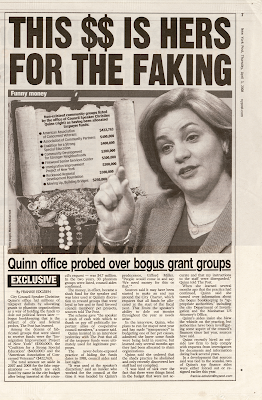 Within days of the NYC City Council's approval of the 'congestion' tax
Mass Surveillance CamScam ... 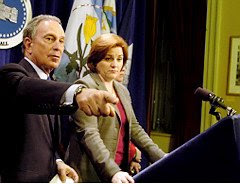 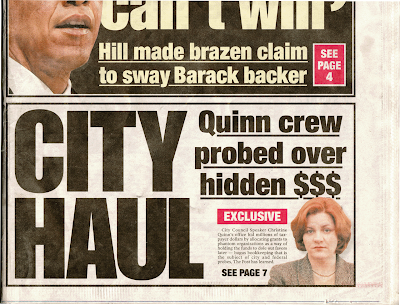 Mayor Bloomberg appeared at a Red Room press conference with Council Speaker Christine Quinn soon after the City Council passed a home rule message for his congestion pricing plan and lauded her "principled leadership," which he said "shows this time, as it has in previous times, that she cares about the city and the interests of the city come first with her."

"It is not easy to corral a lot of people; it’s not easy to tackle some of the controversial issues," Bloomberg continued. "But Christine Quinn really did stand up and, with the power of persuasion and the arguments that we all know make a lot of sense here, she managed to get 30 votes when I think most people did not expect this to pass."

The mayor said it is now "completely clear that congestion pricing has the strong backing of the people of New York City," adding:

" And so this evening’s historic vote by the Council really is something that they all deserve congratulations, all of those who voted for it. I think everybody in this city either believes today or will come to believe that this is the right thing to do for New York City and I just wanted to personally applaud those who had the courage to stand up and do what was right, starting with the Speaker and all of her members. So thank you very much."

Quinn Says She Was Unaware Of Multimillion-Dollar Slush Fund

"I hope what New Yorkers see here is that this was a long-standing practice, not one that we began in the council, and that as soon as we saw what was going on, we took action and turned the information over to the authorities,” Quinn said.

The New York City Council for nearly a decade tucked away millions and millions of taxpayers' dollars by securing the payload for imaginary public groups, Council Speaker Christine Quinn said Thursday after revealing the same bogus bookkeeping practice occurred in her first term.

Quinn also said the council had a practice of adopting and holding funds dating back to 1988. In keeping with her pledge for a "transparent" budget so New Yorkers can see exactly how their money is being spent, Quinn said she condemned the 20-year-old practice.

The New York City Council has appropriated millions in taxpayer dollars in recent years to organizations that did not exist, Council Speaker Christine C. Quinn disclosed on Thursday.

The maneuver, in which funds were set aside for fictitious groups like the Coalition of Informed Individuals and Senior Citizens for Equality, allowed Council members to spend the money later on community programs they supported without obtaining the mayor’s approval.

The practice dates to at least 2001 and encompasses the tenures of the previous two speakers, Peter F. Vallone Sr., and Gifford Miller, according to Ms. Quinn.

Since 2001, about $17.4 million has been budgeted for dozens of fake community groups, according to documents provided by Ms. Quinn’s office.

That many people approve being doubled and tripled taxed within the context of such a tradition of "book-keeping?" Is that Bloomberg the businessman? Or Bloomberg the puppet- tool of the super elite who suppose that the food appears in supermarkets via magic?

How much $$$ has been so siphoned since say September 1985 when officials surrender the Westway Highway project giving Manhattan but a single north-south highway route usable by trucks, to a political movement dedicated to subsidizing questionable mass transit bureaucratic book keeping via an array of domestic surveillance cameras, and to distracting from this ever growing inquisitional monster this represents?

How many activist man hours were fretted over the $$ to be spent on Westway, versus the multiples of that spent on Pentagon bloat and the sinfully wasteful socially counter productive pharmacratic inquisition?
Posted by Douglas Andrew Willinger at 3:33 AM