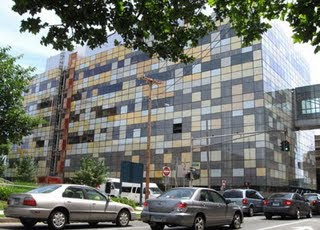 New boondoggle demolition special
that blocks the extension of the Route 34 Freeway's underground path
just past the Air Rights Garage,
placing corridor traffic instead all upon surface S Frontage Street,
so dividing the area, though
with skybridge for Yale people to cross over

Seems like this $500M+ development would have been a great opportunity for the hospital/city/state/developers to fix the situation on Route 34, which currently creates a "wall" between the Hill and the rest of New Haven.

Since the DOT didn't push any serious improvements to Route 34 or the Frontage Road areas, now we're going to see the place open, thousands of new people in the area, hundreds of new parking spaces for cars, with the streets just as deadly as they were before. Cars are still going to be zipping by the front of the hospital (with its literally hundreds of thousands of elderly, blind, deaf, disabled and child visitors every year) and running reds at 50 miles per hour -- even though other hospitals around the country are trying hard to limit vehicle speeds in their area to 15-20 miles per hour tops, and narrow crosswalks, which saves lives and encourages people to walk more. There's no real plan for mass transit either.

The state DOT and the hospital should be ashamed for holding improvements up in paperwork and refusing to push more progressive, immediate actions that would prevent serious injuries and reinvigorate the city's economy.

Some additional links on this planning:

An article from Feb 7 2002 where the Mayor (who is the same Mayor who today supports killing the highway) promotes the sensible idea of a short underground extension built with footings to support air rights development.

Yet that same Mayor now seeks federal $$ to destroy much of the existing operating freeway:

I really don't get it. You concentrate economic activity to the downtown area and the Route 34 "Corridor", and then you restrict access to the area by choking its main artery? Let's not be silly. We do not have alternate transportation; we do not even have near the population density to support mass transit without massive subsidies (a much larger subsidy than required for the roads). You talk of pedestrians and safety, and I can think of nothing safer than keeping the vehicles away from the people in limited access cuts or covered roadways. Just think, a limited access roadway can handle approximately 1200 cars per lane per hour, a surface street can handle about 600 under ideal conditions. You need twice as many surface lanes for the same amount of traffic, and that traffic which now moves at a steady flow would have to start and stop at traffic lights, a major source of air pollution. Pedestrians that now cross the Rt. 34 roadway on bridges would now have to cross twice as many lanes in a crosswalk.

If the purpose is to reduce the traffic in the "Corridor", which is not what a developer wants to hear (one of the comments about Yale's purchase of the West Haven site was "Access to I-95"), where will the traffic go? Onto an adjacent local street, exacerbating traffic conditions on those nearby streets to the point of gridlock? Or maybe not come to New Haven at all, as Yale has shown us with their West Haven site.

The problem with Route 34 is that Henry Fernandez and JD gave it away to Pfizer when they didn't demand that their building be built on a platform, and JD has now let Yale build in the Rt. 34 right-of-way also. Now JD is cramming Gateway College into the mix, Yale is continuing to build, and the Hospital continues to grow. All this traffic in two surface lanes...What ARE you thinking?

Thank God I've lived long enough to see someone else understand the problems with those decisions. If that one block next to the Air Rights garage had been built differently, the connector traffic could at least continue under the garage and surface up ramps into that block, or even better, the next block. Look at the snarled traffic in that area during any rush hour - New Haven traffic engineering at it's finest.