among two other options, including a re-aligning the existing route to displace dwellings 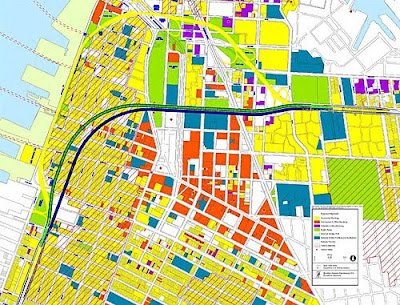 Update*: [the update has a sharper curved transition]

Three versions of a tunnel plan were unveiled last night [with NYSDOT announcing they were dropping the destructive option proposed days earlier], including one that could take homes at yet-to-be decided sites to build ventilation buildings and portals for the tunnel.

The tunnel would begin at the intersection of Congress and Hicks streets in Cobble Hill, run below ground north to Pierrepont Street in Brooklyn Heights before heading west underneath Borough Hall and connecting again with the highway at Navy Street.

Another tunnel option is building it directly under the existing BQE from Kane and Hicks streets in Cobble Hill to North Portland Avenue near the Brooklyn Navy Yard. After it is build, the existing highway would be taken down.

While this plan would have little impact on homes, it could drastically increase traffic on city streets. Vehicles would no longer be able to access the Brooklyn and Manhattan Bridges from the highway.

The third tunnel option is similar to the second. It would also begin and end roughly in the same locations, not require taking private land and force traffic on to city streets to access both East River bridges.

However, part of it calls for running directly under the Brooklyn Heights piers being used to build the 85-acre Brooklyn Bridge Park, potentially causing problems for that project.

With bridge access and limiting displacement priorities, the first option shown in this post's leading graphic would retain the existing iconic cantilver BQE and its approaches, restriped with fewer yet wider lanes while continuing to serve the more local traffic such as that destined for the bridges, and relieved with the new tunnel.

Not only does this improve things by seperating the more local and longer distance traffic, the tunnel can be built while the existing BQE segment remains in service, minimizing construction disruptions.