Ignorant ideology blinded Grist article by David Roberts gloating about the problem with the 'Bertha' TBM fails to mention the actual engineering problem of the machine being blocked by a pipe left by a subcontractor that failed to enter its location into a database- facts gathered from the article's comment section. 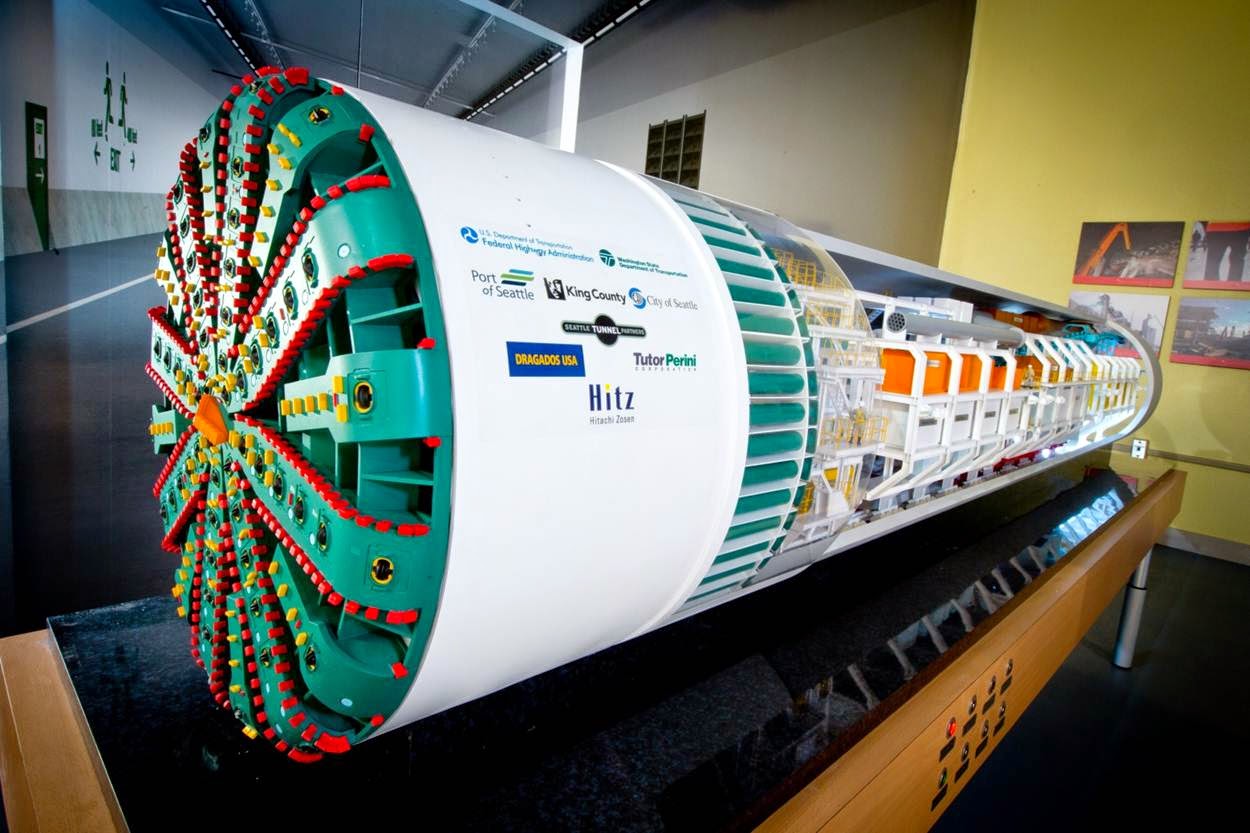 The 'large steel pipe' that broke the tunneling Machine, Bertha, is one reason government should stop using private contractors for every damned thing. We should have used WSDOT folks to do that work. It was there specifically to test to see if the ground could handle a tunnel. It wasn't on the map so the company boring the hole didn't know it was there. If WSDOT had done that work, it would have been on the map. Blame the folks who didn't keep records and pass along the information. Don't blame the tunnel idea.

The vote for the tunnel in Seattle was close. I like the idea of a seaside park the whole length of Downtown Seattle. Many others did too. It will happen.

The viaduct is an eyesore. It also happens that is was, designed and built by the same company with the same materials as the Oakland Freeway that killed a bunch of people during a big earthquake. It needs to come down, yesterday.

I grew up in Chicago where we have a 'surface option' called Lake Shore Drive. It makes it impossible to get to the lake from neighborhoods except every half mile or so where there is an underpass. So much for neighborhood kids playing in the park or walking to the lake shore on a lunch break. A surface option here would make Interstate 5 even more of a clogged mess.

The tunnel is part of State Route 99 which is a 50 mile road from Everett, Washington to Fife. Everett is a huge port town (look up Everett in 1916). It also passes through Tacoma, another huge port town. Where do you think this traffic will end up? What is being suggested by this article is to split this important highway in half. It is bad enough shipping trucks will have to take I-5. To make commuters cram onto the already overwhelmed interstate is plain stupid.

That large steel pipe was installed by WSDOT and failed to put on their maps. The private contractors were relying on information provided by WSDOT gathered during the pre-construction phase that lasted several years for ground even broke. In essence, it was WSDOT's fault unfortunately.

SR 99's importance for freight traffic is minimal since there is no easy access to SR 99 from most of the docks and the Battery Street tunnel restrictions. Most freight traffic funnels on the West Seattle Freeway towards I-5 and beyond. SR 99 is a subpar bypass when Interstate 5 is clogged up though, but that's mainly speaking about the north end around Green Lake where you have to rely on surface streets to make it back to I-5 from SR 99. You don't have that issue with the south end with the SR 599 freeway connection.

SR 99 used to be US Hwy 99 before Interstate 5 took over most of the existing route. But Seattle needs the minimum of two thru-traffic arteries in the area. I would disgress that thru-traffic should go around on I-405, but that freeway is in much FUBAR shape as it's brethren.

Read the article again; "it? Turns out Bertha ran into a large steel pipe that was left there by a WSDOT employee in 2002. Yes, WSDOT killed its own machine. It’s almost poetic. [Correction, 12/16/14:

The steel pipe casing was left in the ground not by a WSDOT employee,
but by a WSDOT-hired contractor. Also, Seattle Tunnel Partners, which
owns Bertha, says the machine broke down due to overheating; neither STP
nor anyone is sure exactly why, or whether the pipe casing is to
blame.]"

It's still ultimately falls on WSDOT to keep their stuff updated. Accountability lies with both the contractor and WSDOT for being the ultimate supervisory organization. STP is still relying on information provided by WSDOT that they did before actual construction occurred.

Labels: infrastructure for the family of man, Seattle