Yet another real estate development project without regard to the broader transportation picture.

A new real estate development - Essex Crossing -- is scheduled to start construction in the Spring of 2015.

It's location, upon that area of parking lots to the south side of the east - west Delancey Street, and the north side of Broome Street, stretching 4 blocks eastward from Essex Street, directly conflicts upon the area for the easternmost portion of the unbuilt Lower Manhattan Expressway at the approach to the Williamsburg Bridge. 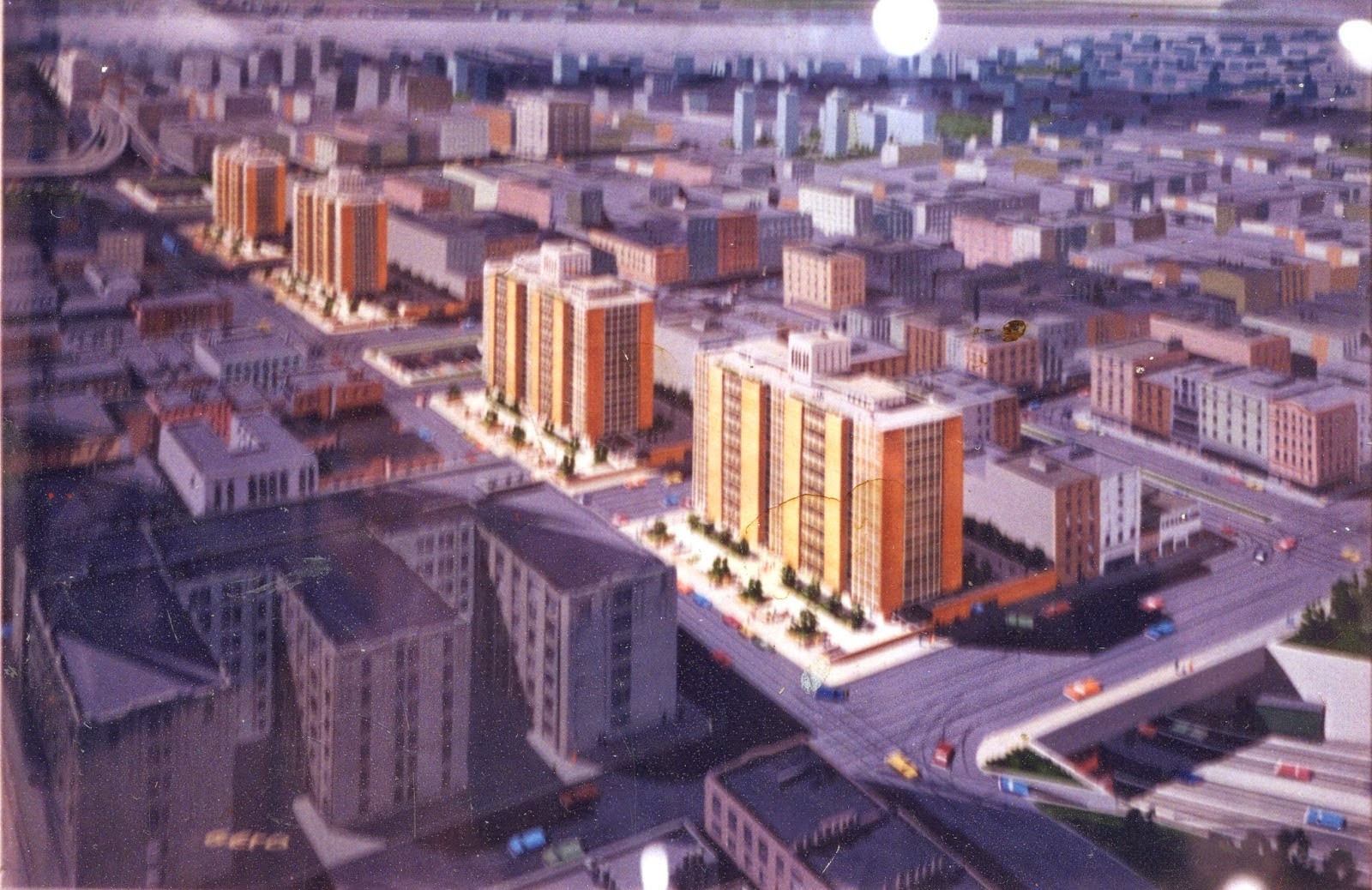 Project was pushed in 2013 by the then current NYC Mayor Michael Bloomberg.

It would create over 1,000 new dwellings.

It was to have 500 underground parking spaces.

Streetsblog is currently gloating over a decision by the developer to fail to include any vehicular parking, promoted by NYC Council Member Margaret Chin, under the assumption that everyone should be arriving by foot or mass transit.

Earlier this year, the developers decided to drop parking from the project entirely, even though the city pushed for up to 500 parking spaces — above and beyond the parking maximums that would normally be allowed under the zoning code.

The city, which initiated the project before selecting the developer, saw off-street parking as an elixir to help the project go down smoothly with the neighborhood. But it was not economical to build that much parking, and the developer eventually chose to eliminate parking entirely because site limitations would have placed the garage in a problematic location.

Streetsblog and Streetfilms recently sat down with Council Member Margaret Chin, who represents the area. Chin has advocated for the city to replace parking garages with affordable housing in her district, and she thinks things will be just fine without parking in the new development. As she says, people have plenty of other options for getting around.


Parking is usually provided beneath, so it is not clear how failing to provide such necessarily means extra affordable housing.

Even if such parking was provided aboveground in a tower it is unclear why that should preclude such extra dwellings as the project does not utilize the full extent of the space as allowed under current zoning.

In any event,  Margaret Chin, who was born in Hong Kong in 1954, moved to the United States in 1963, and has been a City Council Member since 2009, has gotten on the eliminating parking bandwagon in general.

Streetsblog argues that providing parking within new projects is expensive.

There are plenty of reasons not to build parking garages. For one, they’re expensive. New York City is the costliest place in the country to build structured parking, according to the Department of City Planning, at $21,000 per space. Sometimes, it can spike as high as $50,000 per space. That would put construction of a 500-space garage anywhere between $10.5 million and $25 million.


Yet consider what is charged for such parking in New York City.

If for instance a parking spot brought an average of $50 in revenue daily, that would add up to $36,500 in two years.

Yet the life expectancy of the parking spaces would be far longer.

Such spaces provided for residents would support a more diverse population, with friends that drive in from afar, and even for use for storage bins.

And traffic into and out of the garage need not interfere with sidewalk pedestrian traffic, if equipped with center loader street ramps.

Providing such is not about ignoring transit.

Indeed would not transit tend to be better run if it were not so dependent upon the idea of making driving more difficult?

Streetsblog creator and funder Marc Gordon was reportedly not renounced his use of his private automobile.

The Streetsblog dogma against parking is simply about maximizing developer profits, getting everyone to accept a smaller and smaller piece of the proverbial pie.

So why are his screeds against automobile use by others given so much undue respect?

Essex Crossing needs to be stopped until re-designed, with at least 500 parking spaces, and extra density, while preserving the space for the LME to dip beneath into  a new cut and cover tunnel with new buildings atop westward to the already constructed tunnel segment beneath Christie Street, before a transition to either a drilled set of tunnels, or a double deck cut and cover tunnel beneath Broome Street, so as to preserve the SoHo district cast Iron buildings.  Such a facility would connect with a West Side Highway and to a Holland Tunnel facility with at least two additional tubes,

If built in its current configuration, Essex Crossing should be considered a demolition special to be torn down and replaced with a future air rights development project atop a tunneled LME.


Posted by Douglas Andrew Willinger at 12:00 AM