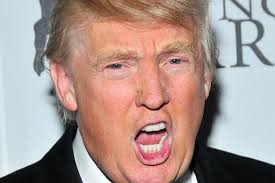 China's bridges: "China, you go there now, roads, bridges, schools, you never saw anything like it. They have bridges that make the George Washington Bridge look like small potatoes." - http://www.washingtonpost.com/blogs/the-fix/wp/2015/06/16/the-many-many-things-that-are-great-according-to-donald-trump/


Yet what has Donald Trump ever said about bridges, in say the metropolitan area of his native New York?   Surely would not such a candidate complain or comment about NY not getting a single new crossing since the completion of the Verrazano Narrow Bridge?

In a radio interview, Trump said he’s convinced the cost of the massive bridge will balloon to $10 billion, a cost he said the state can’t afford. The current projected cost for the new bridge is as much as $4.8 billion, which includes both construction and financing costs.

The state Thruway Authority, which owns the bridge, closed on a $1.6 billion loan from the federal government for the bridge replacement project last week. The better option, Trump said, is reinforcing the current span, which stretches across the Hudson River between Westchester and Rockland counties.

“The bridge is a totally fine structure, but it needs renewal,” Trump told host Fred Dicker on Albany’s WGDJ-AM. “And the renewal can be done for a tiny fraction of the — in my opinion — $10 billion bridge that they’re going to build.”


Trump offered no basis for his $10 billion estimate, aside from detailing his expertise in real-estate development.

The Thruway Authority’s contract for the new bridge pushes much of the cost of potential overruns on the team of contractors building the span, though taxpayers are still on the hook in certain instances, such as if builders encounter hazardous materials or the state decides to add features to the bridge.


Why no mention from Trump about where have all of those toll monies gone?  Such as the toll collected on the Tappan Zee Bridge since it first opened in 1955 or so?

Mike Cape on December 24, 2013 9:51 pm
LOL, the bridge can’t handle the traffic it was not designed for 125 to 150,000 cars a day. The bridge was designed for 50,000 cars a day and is of a design that requires a lot of maintenance, which has not been done. However the bridge was made during a steel shortage and is not constructed of a gauge of other NYC bridges, it was designed with a life span of 50 years. It is made of small box steel girder and truss transfer beams. Take a look at in contract to the steel on other NY area bridges. It needs to go and soon. Trump has likely only flown over it recently, no sweat off his back.

Conscience of a Conservative on December 23, 2013 6:56 pm
Trump is very wrong here, but I suspect he doesn’t care and just wants his daily publicity. The Tappan Zee bridge is in dire need of upgrade as it’s the life-blood for those crossing the Hudson. The State did err, but on the side of not including a light rail option.


In judging the fiscal soundness of the project the State should be thinking about the increased productivity of residents on both sides of the Hudson, along with increased tax revenue by making Rockland more desirable http://polhudson.lohudblogs.com/2013/12/23/donald-trump-tappan-zee-replacement-state-will-never-able-afford/


Actually the State did more than err in not including the light rail, or rather the provisions for such, but more broadly the provisions for rail in general.  After all the Tappan Zee Bridge replacement was long projected to include a heavy rail component of a new Metro North passenger rail line from Suffern to Rye/Port Chester, later truncated to White Plains and than to Tarrytown.

Such was projected to be carried by a lower deck- a feature included in the George Washington and Verrazano Narrows Bridges.  Yet one in-explicitly dropped, even as the EIS left that option out of its cost benefits analysts a logical basis for a law suit that was never brought about.

What happened to all of the liberal-left "progressive" support for expanding rail transit?

Come to think why do we hear so much about Trump, yet so comparatively little about other NY area developers that HAVE proposed new crossings, such as that who proposed the Cross Sound Tunnel?