Rejected in 2012, the idea of eliminating the Sheridan Expressway grade separation continues, with NY officials earmarking $97 million for removal, with a new report recommending that its northern, at grade segment be converted to a traffic light signalized boulevard, upon a reduced right of way. 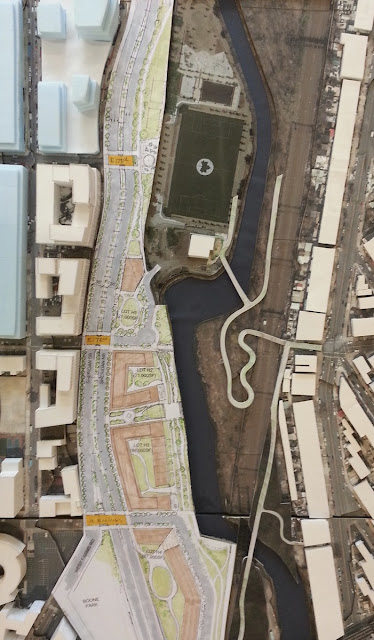 This report displays a number of options for this segment, including narrowing the existing 210 foot building line to building line right of way to as little as 115 feet to facilitate greater amount of real estate square footage to the east. 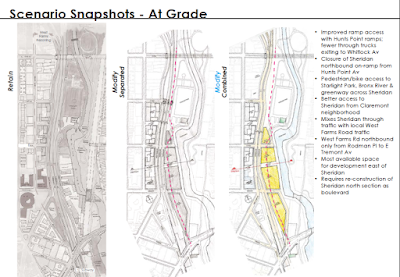 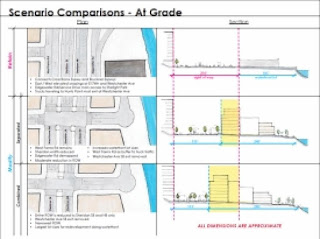 All of these options would transform the existing surface Sheridan Expressway into a traffic light signalized Boulevard.

Option #3 would essentially require demolishing the recently reconstructed Sheridan roadbed, in order to squeeze it to the west, displacing a separate West Farms Drive. 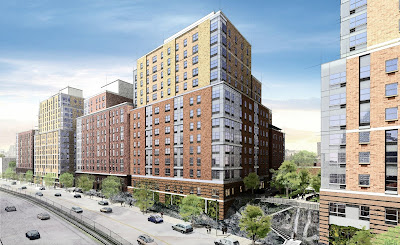 New real estate development along the west side of West Farms Drive;
note that this is in the side of a hill.

But is adding traffic light intersections to what is now a grade separated express highway corridor, that is still fed by freeway segments at both ends between the highly used Cross Bronx Expressway and the Hunts Point Truck Depot really the best solution?


Previous calls for entirely removing the Sheridan Expressway were rejected with the finds that eliminating its grade separated "below grade" under-passing of Westchester Avenue would drastically increase traffic congestion and pollution at the alternative parallel route of the traffic light intersection of Westchester Avenue with Whitlock Avenue.  Meanwhile removing the Sheridan Expressway's "above grade" elevated portion to the south would transfer the traffic further along Whitlock, while doing nothing to address the parallel elevated 'subway' and surface railroad that now flank it and also separate the area from the waterfront. 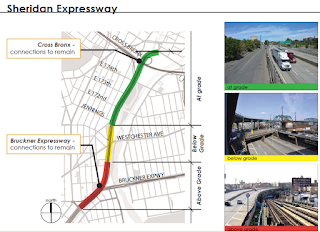 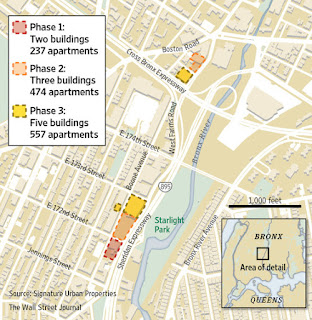 Except for its transition to its underpass crossing of Westchester Avenue, this segment runs "at grade" along the surface.

And this focus is exclusively upon the idea of converting this Sheridan segment into a boulevard, equipped with three new traffic light intersections, one apiece for the crossings of Jennings Street, 172, and 173rd Streets, and flanked by rows of new buildings.

To the north, the existing grade separation beneath the 174th Street Bridge would be retained, along with the ramp connects to and from the Cross Bronx Expressway.

And to the south would remain the existing Sheridan Expressway, with its underpass crossing below Westchester Avenue, and further south with its elevated viaduct wedged between the railroad to the east, and the elevated 'subway' line to the west, feeding directly into the elevated segment of the Bruckner Expressway, which would have a new set of ramps to Hunts Point Market to better facilitate truck traffic.

And flanking this "Boulevardized" Sheridan segment, new rows of buildings to the west, where the topography rises as a hill, and to the east where it runs flat towards the Bronx River, would replace existing industrial uses and contain hundreds of new residential dwellings.

All of this is being touted as the best option to improving the urban landscape with new park-lands, neighborhoods and jobs, with significantly improved local access to the Bronx River waterfront.

New development facing the lower portion of the Bronx River with enlarged parkland and improved local pedestrian access are all laudable goals, even though displacing industrial uses which could nonetheless be relocated to perhaps Hunts Point.

But how honest is it to combine this with the idea of replacing this surface segment of the Sheridan Expressway with a "boulevard" with three new traffic light intersections, and to issue renderings showing that with 1,000 plus new residential dwellings and presumably far more pedestrians, with no increase in surface traffic upon the replacement Boulevard that would have to handle these new residents plus the vehicular traffic from the Expressway segments at both ends. 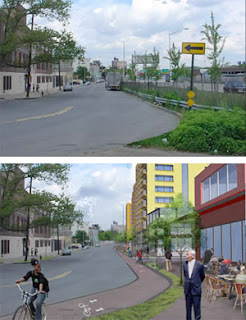 Though the latter rendering has this portion of the Sheridan Expressway removed, though still fed by Expressway segments at both ends, and its space taken over by a new line of buildings, with over 1,000 new residential dwellings, it shows virtually no vehicular traffic.


And what about the pretense that its an either-or situation?  That re-development and improved local waterfront access is necessarily incompatible with retaining the Sheridan Expressway as assumed by this seriously misguided campaign to simply remove the Sheridan.

Have Sheridan Expressway removal advocates chosen to shut their eyes?  To fail to try imagining the best of both worlds, eliminating the Sheridan's undesirable local lateral separation, while retaining its desirable longitudinal grade separation of keeping the bulk of the vehicular traffic out of the surface street grid.  Instead just following an often overly simplistic and dogmatic trendy campaign of freeway removal?

A Sheridan Expressway Tunnel would accomplish this best of both words, with express traffic underground, thus freeing up the surface more for local use.

Placing freeways underground is the best of both word's solution, but is often dismissed as too expensive or difficult.

But this actually a pretty egregious example of keeping one's eyes shut, of a freeway removal campaign  being deliberately obtuse.

Just look at the topography.

The Bruckner sits in a river valley, between the Bronx River to the east, and a hill to the west.

Note how Jennings, 172 and 173rd Streets descend to the existing West Farms Road.

Activists want to facilitate a locally improved environment with improved accessibility to the Bronx River waterfront, and new real estate developments on both sides of this Sheridan segment.

But they are retaining a major vehicular traffic corridor, and thus maintaining the surface separation of the Sheridan Expressway corridor, namely its daily flow of traffic particularly between the Cross Bronx Expressway and Hunts Point market.  Don't forget that this Sheridan segment would continue to be fed by Expressway segments at both ends, and that the area is only going to have far more activity with all of this new development, plus the new ramps to Hunts Point, to say nothing of such further south if the Re-Think NYC plan to add a new terminal to La Guardia Airport and its attendant new development at Port Morris comes to fruition.  Under such circumstances, ONLY a tunnel would achieve a 'Sheridan' surface street that would be truly more like a local surface street than a de-facto freeway.

So why the zero consideration of a 'tunnelization" of this Sheridan segment- especially given the topographical ease and feasibility of achieving this with such numerous cost advantages?

- Such as of NO new excavation.
- Such as of retaining the existing Sheridan Expressway roadbed that was recently replaced with a relatively high quality concrete construction- option #3 would require ripping this out and replacing it altogether.
- And the opportunity of facilitating this with the designs of the yet to be built flanking future real estate development.


Again, note how the streets from the west, Jennings, 172 and 173rd,  drop down to meet West Farms Road, where the planning envisions replacing the existing buildings with new taller/denser buildings, as well as along the eastern side nearer to the Bronx River.  And note that these new buildings flanking the Sheridan segment would be substantial, with significant foundation walls thus framing this Sheridan segment.

To make this Sheridan segment into a tunnel, while crafting a true boulevard on the surface, atop the existing road-bed, construct a new box tunnel enclosure-deck supporting a new surface boulevard atop, directly faced by the "1st" floors of the flanking new buildings, which could have their facing foundations serving as the outer walls of this new tunnel, retaining the existing flanking service roads as underground delivery access for these new buildings, with the streets from the hill to the west leveling out to meet this new boulevard, and a terrace to the east of this new development  facilitating the transition descent to the Bronx River water-front.

Constructing this deck would be an added cost, surely.

And so would the idea of designing these buildings to serve essentially as the outer walls of this new 'tunnel' that would include the existing service roads potentially used for underground delivery access.  Doing this would furthermore allow the idea of reducing the initial construction costs by deferring the extra walls to coordinate off the now underground service roads from the now underground freeway.  As these buildings have not yet been constructed, designing them for this purpose, including having their '1st" floors to face this new surface boulevard would be infinitely more practical than a retrofit.

This new deck would start at some point to the north of 173rd Street, and extend south to the vicinity of Jennings Street, if not further to as far as Westchester Avenue, depending upon several planning decisions.  For instance it could extend as far north as the bridge which carries 174th Street, with its north-south 'Sheridan' Boulevard descending to connect to the existing West Farms underpass beneath this bridge, or perhaps continue upon its raised grade to a new at grade intersection with 174th Street, before descending to the north in order to connect to the existing underpass crossing of the Cross Bronx Expressway.  Or perhaps it could combine these options, extending to the 174 Street Bridge but with a descent to the existing West Farms Road grade, or even conceivably, extend a bit further north to cover over a portion of the eastbound Cross Bronx Expressway to the southbound Sheridan Expressway ramp.  Similarly, the extension to the south would involve some options, such as those regarding the southbound off-ramp.


By so retaining the existing Sheridan recycled as an underground highway in the least expensive manner possible with NO new excavation and freeway roadway replacement, with the existing highway enclosed in a new tunnel box constructed atop further facilitated by developer cooperation with the new buildings alongside --  in sharp contrast with Boston's Big Dig which actually relocated Boston's I-93 Central Artery in all new lowered tunnels --such an underground configuration would make the new development more pleasant and valuable, making such a lid more economically viable.

That such an idea does not even appear in any of the great urban planning discussions,speaks volumes of the controlled, dogmatic and not very imaginative nature and political dynamics of such organizations as the Congress for New Urbanism.

Posted by Douglas Andrew Willinger at 2:01 AM