Waste Time & Fuel, and Continue to Push the Traffic Burden Disproportionately Around Manhattan

According to the New York Time's Thomas Friedman, column of May 21, 2008 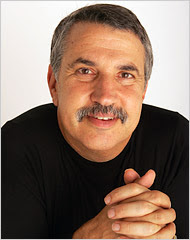 Friedman has at times made a great deal of sense, particularly with his earlier writing favoring more fuel efficient automobiles via biofuel and hybrid technologies. Such things would improve the environment while preserving mobility for the many.

Hence, its disheartening to read his latest call to waste time for the many, of whom which he would turn into law-breakers:

It baffles me that President Bush would rather go to Saudi Arabia twice in four months and beg the Saudi king for an oil price break than ask the American people to drive 55 miles an hour, buy more fuel-efficient cars or accept a carbon tax or gasoline tax that might actually help free us from what he called our “addiction to oil.”

Perhaps he spends too much time in Manhattan with its propensity to build vertically, while ignoring the horizontal- aka highways.

If he wants to improve fuel economy, he should propose doing something about NYC's lacking highway infrastructure- that is highways as roads without traffic lights, as such decrease driving efficiency significantly- think about freeway mpg versus that of guaranteed stop and go traffic.

As a start, he should develop an interest in the Gowanus Expressway Tunnel project, and have it extended to include a Tillary Street Tunnel bypass to an undergrounded BQE in Williamsburg, along with improvements not only on the Brooklyn side of the Brooklyn Battery Tunnel, but also to its Manhattan side.

Revive Westway, as a tunnelway in some configuration, with additional capacity, including separate carriageways for trucks!

If nature gives us that earthquake that a recent documentary on cable tv (the History Channel or the Discovery Chanel) that will cause the ill-advised buildings on Battery Park City to tilt, have those buildings demolished and route the new tunneled highway approach through the Battery Park City landfill for superior geometry, beneath a new park with beach that should have been constructed 30 years ago.

Build supplemental tubes to the Holland Tunnel- 40 minutes to leave the city is a planning atrocity, particularly after 911 with the jesuitical government's lip service to increasing evacuation route capacity.

Otherwise, let's have a law suit against the existing environmental classism/racism that places the traffic around most of Manhattan and through the Bronx.

Also, build a Cross Harbor/Cross Brooklyn Highway/Railway tunnel, linking to JFK airport and the Sunrise Highway corridor in Long Island, to an extended I-287 that crosses the sound as the new drilled Sound Link tunnel, with a slightly larger bore (60' versus 55') to permit a lower deck for rail and/or a separate truckway.

Fund this by opening up the existing books to thwart the siphoning, whether that be to the overseas bank accounts of the international continuing counter reformation terrorist/elites that get away with robbing the public of their monies and liberties, or the Pentagram/Pentagon.

Let us get beyond the standard jesuitical distraction -- repetitiously pushed by the "environmentalist" and transportation planning advocacy lock-step groups, such as the infamous 'Straphangers' Campaign' and the 'Tri-State [anti-traffic light free vehicular road] Transportation Campaign' -- of transit versus transport that allows the graft and military/prison-industrial complex bloat, and the accompanying immoral pharmacratic inquisition and its criminal mercantilism to continue.

Much to his credit, Friedman writes in this same column about a book titled "Superclass" by David Rothkopf, a visiting scholar from the Carnegie Endowment, regarding:

... “the superclass” — a new global elite, who are much better suited to operating on the global stage and influencing global outcomes than the vast majority of national political leaders.

Some of this new elite “are from business and finance,” says Rothkopf. “Some are members of a kind of shadow elite — criminals and terrorists. Some are masters of new or traditional media; some are religious leaders, and a few are top officials of those governments that do have the ability to project their influence globally.”