West Side Highway, You're Buried 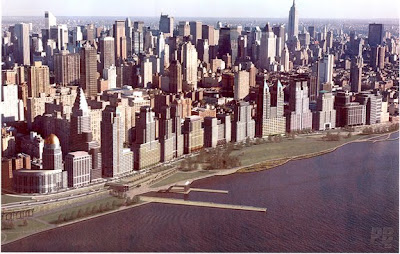 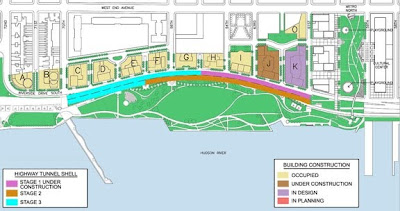 Another Sampling of Attitudes

West Side Highway, You're Buried 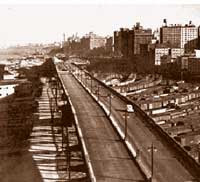 The NY Times looks at other things NYC is getting from the transportation bill. Senate will be looking at the bill later. And the second Apprentice, Kelly, is supposedly working on the Trump Place project.

Photo of the West Side Highway, circa 1936, from NYC Roads

Bury it! Of all the bad Robert Moses impositions on the city (or any city for that matter) the elevated freeway has to be the worst. After post-earthquake San Francisco's experience where the 1950's vintage freeways were jackhammered and hauled away to be replaced by blue skies, trees and rising property values can anyone argue that elevated freeways are a good thing?

Let's forget about Trump and imagine if Central Park was surrounded by 6 lanes of elevated freeways. Would tearing them down benefit the Trump? Yep. But who cares? Someday, he'll be dead and buried in some gold plated monstrosity and the city could have a lovely waterfront. Or not, should the city design its infrastructure with spite in mind.

The West Side redevelopment downtown has made the river a living thing again. Why should Chelsea and the West Village have all the fun? The whole area would benefit hugely from a city encircled by greenways and fishing piers and places to just view the city. San Francisco got its Embarcadero back. Paris and Oslo (to name two citites) are loaded with underground tunnels that whisk traffic away from pedestrians. Why not us? Drop the 'anti-developer' bias for 2 seconds New York, and think. Let's not cut off our river to spite our vulgarians.

By roger D
too bad we didnt bury it 30 years ago... the westway project was going to bury the thing and build large parks along the shoreline all with federal money... but local anti-dev groups blocked it back then-- we need a better balance between development and anti-development in the city. It seems local groups have too much power now and block anything and everything they can. we've swung the other way from where we were in the middle of the 20th century (that's not to say we should not protect historic buildings)

I heard somewhere that the final obstacle that prevented burying the WSH back then was the possible destruction of non-endangered trout habitat.


By joe
Not to be too nitpicky but the Westway project was below 40th St, see http://www.thirteen.org/nyvoices/highlights/road_not_taken.html and not the portion of the old Miller Highway viaduct that Jen mentioned. Still, burying these highways would do wonders for waterfront access.

It's hard for me to picture how the Westway would have ever worked--and can you imagine how much it would cost today? But it's fun to think about this stuff. It's even more fun to imagine a president and a congress who don't milk the city dry only to give us...what exactly? Where's our government boondoggle?


Um.... hasn't anyone learned anything about the last major highway that was taken down and put underground ala The Big Dig?

Maybe rather than spending millions on moving a highway under itself, perhaps they should spend that money on getting the poor out of their poverty. Or maybe clearing up the mess the US is making in other countries.

The Big Dig is pretty awesome if you ask me. Sure it was expensive and probably built in a way that made a few too many contractors rich, but man-o-man is that thing going to tranform Boston in a few years. Once the kinks are worked out and the former elevated areas are filled with parks and museums and LIFE it'll be hard for New Yorkers to make stick in the mud claims that they'd rather give the money to the "poor." Helping the poor is a favorite canard of an argument brought up by people who'd rather not build anything...except low cost housing of course. The problem with this argument is that it's not an either/or situation. Burying elevated freeways (or building the Second Avenue Subway) are projects that have their own economic reasons that exist beyond, say funding other, no doubt worthy projects. Since the Federal government is going to spend untold BILLIONS on roads in the red states, why shouldn't New York get a cut of our share since we pay MORE than our share in taxes anyway. When it comes to transportation we're getting screwed. The anti-urbanites are winning. And the more we bemoan the Big Dig's leaks and talk about helping the poor the more money goes to build more highways to the sprawling Nowherevilles in Tom DeLay's district.


By Douglas A. Willinger

" Let's not cut off our river to spite our vulgarians."

That was what I detected at the June 30, 1999 public hearing, with the opposition largely based upon spite: aka, Trump's buildings block the river view of those to the east, so let's keep that ugly elevated highway to block their view.

The *sensible* (as opposed to spiteful) opposition centered upon the fact that elevated highway was refurbished around 1990, with some complains about the tunnel's curve and perhaps a conflict with rail expansion.

So, perhaps let's modify the tunnel plan for these purposes, staightening it somewhat and hence moving it a bit west for greater flexibility, hopefully with an extra lane per direction and full shoulders for on-off traffic, and design it to be extended southwards, eventually all the way to the Brooklyn-Battery Tunnel and an improved Battery Park Underpass that would bury the FDR Drive to the South Street Seaport area.

Tunnelifcation for the 9A (I-478) corridor could reduce pollution with filtration as done in vehicular tunnels outside the United States.

Alas, New York's politicians would rather placate the spiteful over the sensible, as it has become politically popular to attack such projects as a means of some extra funding for non-vehicular mass transit (and as a useful distraction from addressing such things as questionable MTA finances).