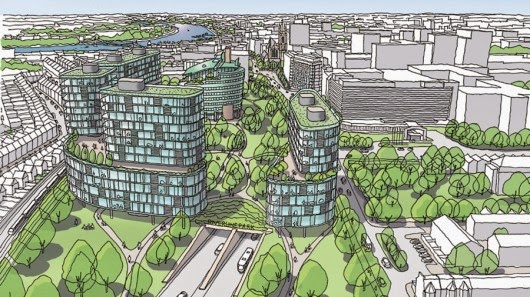 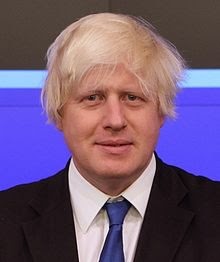 
An article appeared in Gizomag today about an initiative by London's Mayor for reconstructing a series of London motorways underground.

The proposal was announced by Mayor of London Boris Johnson during a recent visit to Boston, US, where a similar project has taken place. The Central Artery-Tunnel Project (nicknamed the "Big Dig") saw Boston's existing six-lane elevated Central Artery replaced with an eight-lane underground highway.

According to the Massachusetts Department of Transportation, the Big Dig was the "largest, most complex, and technologically challenging highway project in the history of the United States." It is said to have significantly reduced congestion, improved the environment and led to regeneration above ground.

The Greater London Authority says that over 70 sites across London have been considered for the potential introduction of tunnels, fly-unders and decking, the renderings for some of which can be viewed in our gallery.

Among the suggestions, a fly-under has been proposed for the A4 in Hammersmith that would reconnect the town center with the River Thames.

A mini tunnel has been proposed for the east-west A13 in Barking Riverside [in eastern London], meanwhile, on the basis that it could open up a significant amount of land for future development and reconnect parts of the local area.

Decking over a section of the A3 in Tolworth [in south eastern London] would create land for new homes and connect the area adjacent to the new Crossrail station with the rest of the borough.

And the addition of decking or a mini tunnel to the [Intermediate Ring Road] A406 in New Southgate [in northwestern London] would also create space for new homes and connect the surrounding area to the new Crossrail station.

Elsewhere, there is discussion about a potential replacement for the London Inner Ring Road. Johnson believes that an inner orbital tunnel or two cross-city tunnels could help to deliver more efficient and reliable movement of vehicles around the city.


Projects as these include covering existing grade separated motorways, as well as adding new grade separation to existing arterial road segments- with many of London's main roads comprising both motorway and at grade segments.

This builds upon what was published in 2014, such as that regarding the possible London Inner Ring Road replacement- not via a mainline surface route but rather built by drilled tunneling. 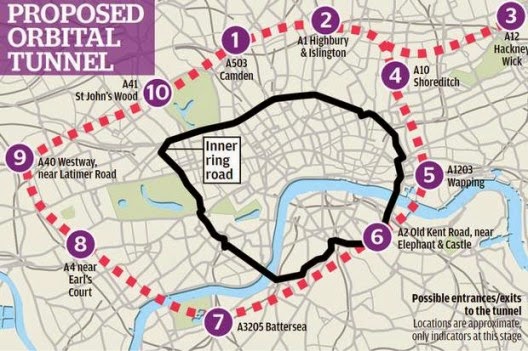 
Could London’s traffic problems be fixed by an underground ring-road? ‘Very early stage’ plans that would see a 22-mile subterranean orbital were revealed by the Mayor today.

The Inner Orbital Tunnel is the idea of the independent Roads Task Force, which has been looking at ways to deal with the capital’s increasing traffic. This new scheme would cost an estimated £30 billion to build and would encircle the centre at roughly the Zone 1/2 boundary. Dual-carriageway tunnels would link the Westway in the west to the A12 in the east, two new tunnels would cross the Thames at Wapping and Battersea, and the southern section would pass through the major redevelopment areas of Nine Elms and Elephant and Castle.

The scheme would take thousands of vehicles off the surface roads, potentially reducing both congestion and pollution (it’s not stated, but we’re assuming a major tunnel, a decade or more hence, would employ some kind of carbon capture or pollution scrubbing not possible on a surface road). The freed-up land above could then be developed in various ways, funds from which would help pay for the tunnels.

Deputy Mayor for Transport Isabel Dedring told the Standard: “This is not about creating a motorway through the centre of London. It’s about freeing up capacity on the city surface, improving air quality, and reclaiming space for public parks, pedestrians and cyclists.”


Under the outline plan, the iconic Tower Bridge – currently the eastern border of the congestion charge, and bowing under a huge weight of traffic – would be closed to vehicles. There would be two underground river crossings at Battersea, near Battersea Power Station and Wapping, near Tower Bridge. The A40 Westway flyover near Shepherd’s Bush could even be demolished as part of the scheme. (The A4 flyover at Hammersmith in west London could also be demolished and replaced with a ‘flyunder’).


The plan is a revival of official efforts to construct a modern grade separated motorway network for London, something that had been pursued by more conventional - re- surface - means that included a planned 'London Motorway Box' that had been canceled in 1973.  The new plan is essentially a revival of such via a nearly entirely new design and different means- as a drilled tunnel avoiding the massive surface disruption of a surface mainline route. 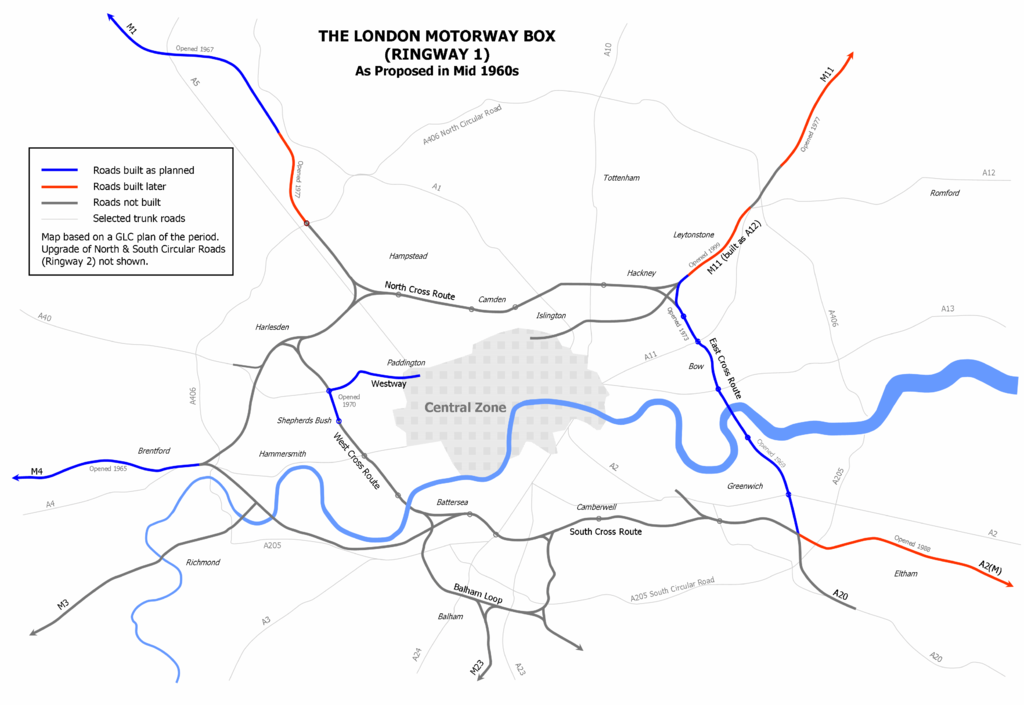 The 'London Motorway Box' also known as Ring Road #1 was the innermost of a series of 'Ring Roads' - what we in the USA would call 'Beltways'. 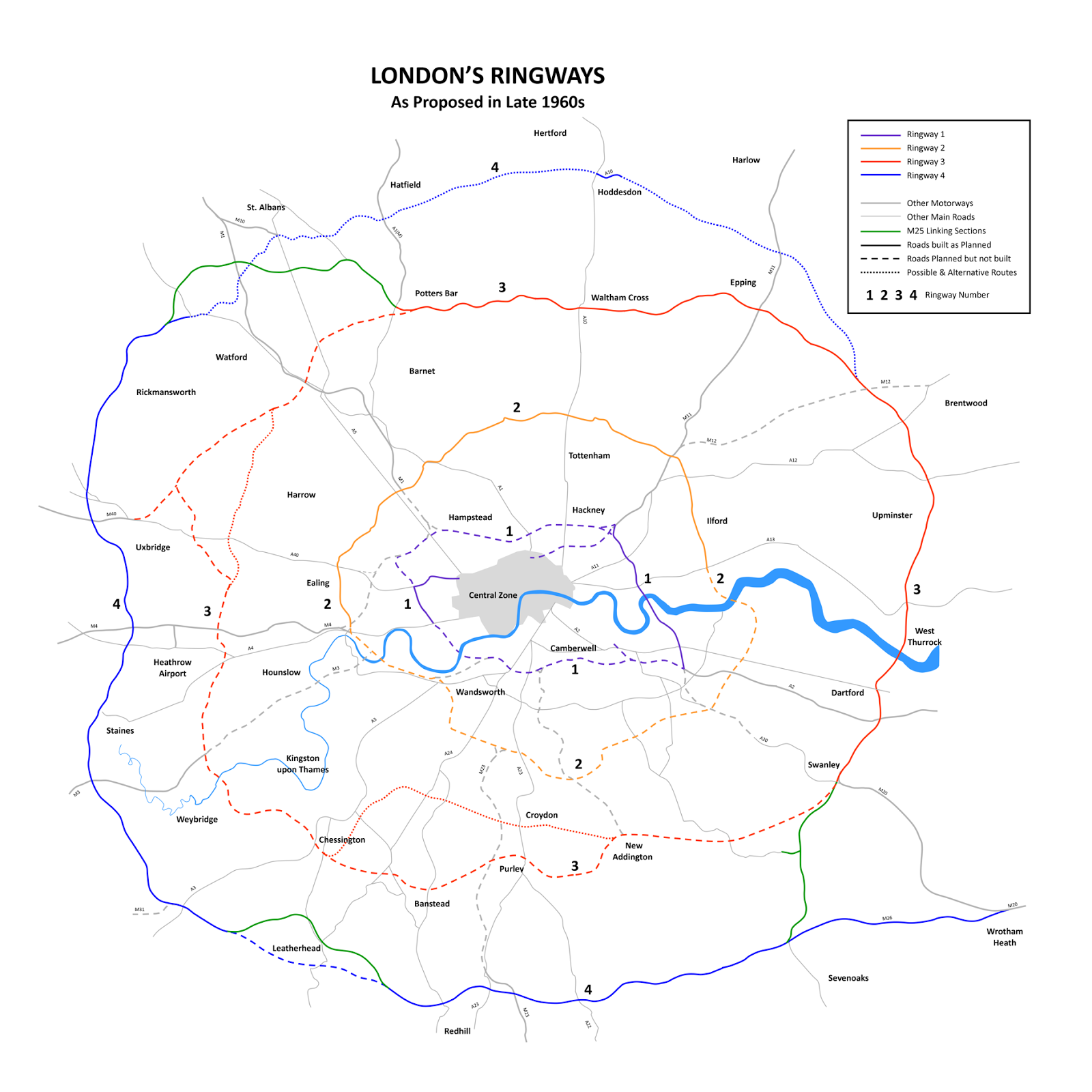 
The 'London Motorway Box' as planned by the early 1970s would have been largely elevated, built along existing railroad corridors to reduce building displacement.

An example of such a style of motorway was London's somewhat ironically named 'Westway'.

The irony was that was also the name of New York City's officially proposed in 1974 and canceled in September 1985 project to construct a West Side Highway replacement of a 1920s design elevated viaduct with a largely box tunneled modern replacement within 93 acres of new landfill extending the street grid for new neighborhoods and parkland extending Manhattan island further west by somewhat narrowing the Hudson River.  Though including a northern segment that would have been elevated along the area of the Javits Convention Center, N.Y.'s Westway was condemned for its tunnel-landfill segment despite the area already being industrialized landfill, by 'environmentalists' behaving oblivious to the clear benefits of relocating the vehicular traffic stream into a tunnel.

Yet London's Westway, was rather different. 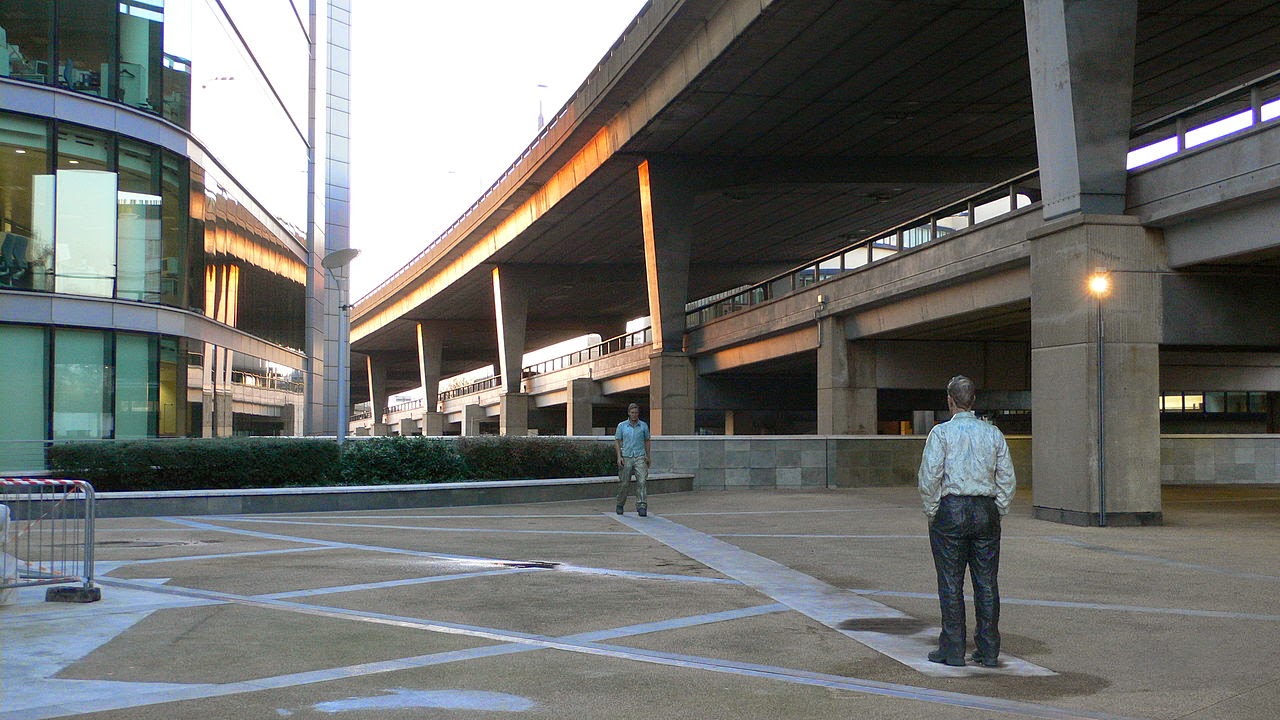 Such a design doubtlessly influenced the 1973 cancellation of the remaining planned London motorway network, leading to the situation where something serious needs to be done to provide a modern motorway network but in a far more broadly appealing manner.

Such concerns even prior to 1973 had lead to various consideration of providing such by a network of underground roads, then being rejected due to cost considerations, such as this.

In the decades since, technological developments have made such more practical as elucidated in the 1997 book 'Transport in Europe' by Christian Gerondea.

That book discusses advancements in the 'Austrian' method of drilled (moled) tunnel creation, and proposes creating urban motorway networks of two level tunnels that would be additionally cheaper to build because they would provide the necessary height for passenger automobiles and small trucks, but not that for larger trucks, which would allow only a single deck within a comparable diameter such drilled tunnel.

The London proposal makes no mention of such a reduced height design, with its emphasis upon handling traffic including commercial- presumably larger trucks.

Such a design would follow that of Sweden's recently constructed Stockholm Ring Road, which had been temporarily stalled during the latter 1990s due to doctrinaire 'environmentalist' opposition to accommodating a broader mass of vehicular traffic.

Such opposition does face the new London plan, such as that formally from within Islington in northeastern London:

The scheme, which will cost double that of the Crossrail project, would see a major junction built at Highbury Corner to join the A1 while creating links with Camden and Whitechapel.


When the motorway was announced as part of the GLA’s Infrastructure Plan 2050, the Mayor said it would remove “tens of thousands of cars” from London’s roads and help reduce the huge pollution problem in the city.

But a motion set to be read at full council next Thursday by the town hall’s environment and transport chief Cllr Claudia Webbe brands the scheme “damaging” and “inappropriate”.

It states: “The proposed scheme would be extremely damaging to Islington and is an entirely inappropriate method of addressing the long-term transport infrastructure challenges facing London.”


The council’s executive is set to put forward strong opposition to the underground motorway as part of the consultation on the infrastructure plan, which closes on October 31.

Posted by Douglas Andrew Willinger at 2:16 AM

A recent article about Boris Johnson that reports on his efforts to improve the bicycle and rail networks but makes no mention of his work promoting underground freeways: