"Congestion" Pricing Advocates have a religion that's against any new roads, but which favors creating many new bureaucratic jobs to produce little or nothing in benefits.

Any politician voting in favor of this jesuitical tax scheme ought to lose their job! 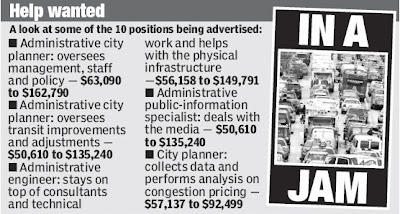 March 28, 2008 -- The city is already seeking résumés for high-paying gigs with its congestion-pricing initiative - despite the fact it might never be approved.

And, according to the salaries being offered, drivers aren't the only ones who'll pay if the plan gets off the ground.

The Department of Transportation posted 10 positions - paying up to a combined $1.2 million - for engineers, planners and spokespersons who would work in a variety of capacities promoting and managing Mayor Bloomberg's contentious plan to charge drivers $8 to enter Manhattan's business districts.

"Starting the search now is necessary, so we can quickly hire the engineering and planning professionals we need to implement the many components of congestion pricing efficiently within one year of approval," said DOT spokesman Seth Solomonow.

The gigs, advertised on the DOT's Web site and on Craigslist, run the gamut from press officers to planners.

But several lawmakers - who must approve the plan to charge $8 to drive below 60th Street during business hours before it can go into effect - said they felt the city "put the cart before the horse."

"[It] still has several major hurdles to clear before becoming a reality and it is shameful that DOT has already taken the liberty of posting employment opportunities," Queens City Councilman Tony Avella said.

He and several other council members plan to rally against congestion pricing today at the 59th Street Bridge.

Even Councilman John Liu, who chairs the Transportation Committee and is a supporter of the plan, said, "I think it will happen, and I know the time frame is short, but this is jumping the gun."

The federal deadline for the plan to be approved by the City Council and the state Legislature is April 7, but the closing date Albany set for itself is Monday.

If the council and Legislature do not approve the plan, the city could miss out on $354 million in federal mass-transit funds.

The jobs are in DOT's Office of Sustainability and Planning, and the salaries would be paid from congestion-pricing revenue.