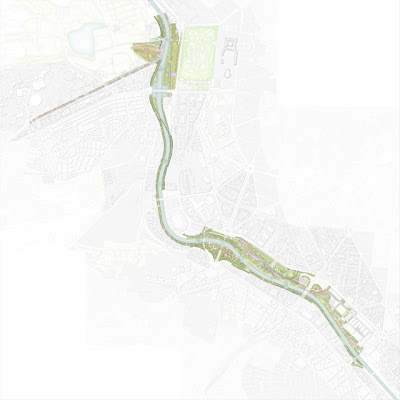 The M 30 had been build decades earlier.

This project was not simply covering the existing M 30, but rather digging it down, and not only for the M 30 but for connecting routes, such as that from the southwest.


It was reported at
http://www.landezine.com/index.php/2011/04/madrid-rio-by-west8-urban-design-landscape-architecture/

The ambitious plan by Madrid’s mayor Alberto Ruiz-Gallardón to submerge a section of the M30 ring motorway immediately adjacent to the old city centre within a tunnel was realised within a single term of office. The city undertook infrastructure measures over a total length of 43 kilometres, six of them along the banks of the River Manzanares, at a total cost of six billion Euro. West 8 together with a group of renowned architects from Madrid, united under the name MRIO arquitectos led by Ginés Garrido Colomero designed the master plan for Madrid RIO.

In 2005, an invited international competition was announced. The proposal submitted by West8 and MRIO for the design of the reclaimed area above the tunnel was the only submission to resolve the urban situation exclusively by means of landscape architecture. The design is founded on the idea »3 + 30« – a concept which proposes dividing the 80 hectare urban development into a trilogy of initial strategic projects that establish a basic structure which then serves as a solid foundation for a number of further projects, initiated in part by the municipality as well as by private investors and residents. A total of 47 subprojects with a combined total budget of 280 million Euros have since been developed, the most important of which include: the Salón de Pinos, Avenida de Portugal, Huerta de la Partida, Jardines de Puente de Segovia, Jardines de Puente de Toledo, Jardines de la Virgen del Puerto and the Parque de la Arganzuela. In addition to the various squares, boulevards and parks, a family of bridges were realised that improve connections between the urban districts along the river. The first subprojects were realised in spring 2007. The realization of the whole project is planned for spring 2011.