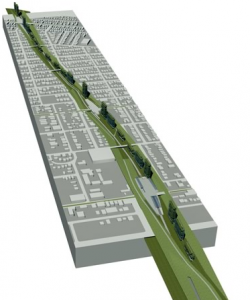 Currently, the Carl Schurz Park is separated from the bountiful waters of the East River, which it was once connected to in the past. In between the Park and the water lies the Franklin D. Roosevelt East River Drive – commonly known as the FDR Drive. It forms the line of demarcation between the interior of the East Side and the East River, running approximately nine and a half miles long. Two layers of the FDR separate the Carl Schurz Park from the East River: the northbound FDR lanes the on the middle layer, and the southbound FDR lanes on the bottom layer, with the park itself on the top layer. Although the parkway is a necessary facet of the area, and serves a vital purpose for commuters, it also has several harmful polluting effects on the park and its the species. Therefore, our proposed idea is to redirect the Parkway away from the park, so that it can once again be joined with the aquatic environment and species that it has previously been joined with in the past. Reconnecting the park to the waterfront could return it to a more natural state.

Cheonggye Freeway, South Korea: In the 1970s, the Cheonggye River in Seoul, Korea, was covered and a road and elevated freeway were built over it. By the year 2000, the area became one of the most congested and noisy parts of Seoul. IT was decided that the freeway would have to be removed in order to combat these issues, as well as stimulate the economy. Freeway demolition began in June, 2003 and was completed in September, 2003. Stream restoration began in July, 2003 and was completed in September, 2005. In March, 2003, Seoul began constructing its first Bus Rapid Transit line, which serves the route of the freeway and is designed to accommodate the drivers of the 120,000 cars that used the road every day. It was completed in June, 2003, at the same time the freeway was closed.

The Korea project was about demolishing an elevated 4 lane freeway, and its flanking 5 lane service surface roads, and uncovering the stream that had been previously paved over.

It is IMHO unwise to come to too many conclusions about the Cheonggye Freeway removal's transport utility without finding any before and after maps (only finding before and after pictures about the obvious that the project made the place much prettier and infinitely more pedestrian friendly).

However, the East River Drive, otherwise known as the FDR Drive is Manhattan's sole remaining full north-south freeway, with the parallel West Side Highway no longer filling the colloquially accepted definition of such with the post Westway defeatism consigning that corridor’s vehicular traffic to traffic lights south of 57th Street.

It's a telling indication where this nation is headed when the universities and the foundation type entities are supporting such nonsense to waste countless person-hours while increasing pedestrian-vehicular conflict, rather than the truly progressive type projects as recently completed in Madrid, Spain.
Posted by Douglas Andrew Willinger at 3:24 AM