Writes letter to Gov Elect Cuomo asking to scale back the Tappan Zee Bridge Project, including deleting the rail component.

On the capital side, the next Governor should also support the LIRR third track project (key for Long Islanders to reap the benefits of East Side Access) and plans for bus rapid transit in the Tappan Zee Bridge/I-287 corridor. Additionally, plans for Tappan Zee Bridge replacement could be scaled down and proceed without the commuter rail connection from Rockland to NYC. Most commuters using the Tappan Zee are travelling to suburban destinations, not ending their trips in Manhattan, so the bus rapid transit connection, which provides much greater utility at the most affordable cost, should be retained.


"Scaling back", without stressing modularity of design -- aka a design allowing components to be added in seperate stages -- for such a major corridor is simply asinine.

The project should include the rail component from Suffern to Tarrytown, with the design permitting a future extension to White Plains and Portchester, and eventually, via the proposed Cross Sound Tunnel, to Long Island and ultimately Jones Beach. Such would be extremely sensible later addition, for serving future desification-redevelopment of the I-287 Cross Westchester Expressway's numerous office parks, which would significently add potential risership.

Likewise, the project should include a barriar seperated 'busway' designed to be expandable to a minimum of two lanes in each direction, given the economics of scale (the 'busway' like any other seperate carriageway requires its own ramps), and serving as a seperate express truckway- more effectively providing additional east-west road capacity where it's scarce, and the ability to better seperate types of traffic. 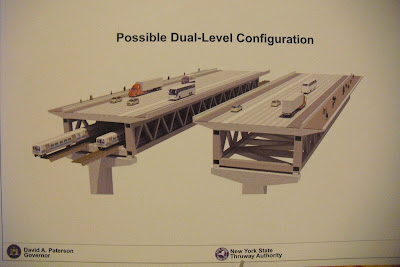 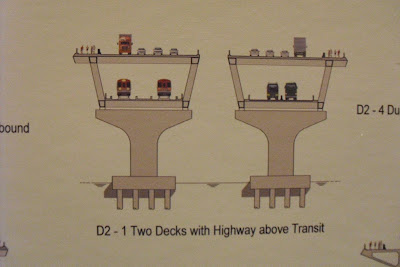 The twin configuration variant with the best modularity of design

Indeeed, I-287 is Westchester County's sole east-west interstate highway, and one of two of the county's east-west freeways: the other, the Cross County Parkway does not permit trucks -- hence the 'parkway' designation -- and is missing its extensions east of the Hutchinson River Parkway and west of the Saw Mill River Parkway, let alone any bridge or tunnel connections to Long Island or New Jersey. A third planned east-west freeway -- the Bear Mountain Parkway, remains significently unbuilt, despite the proximity of the Indian Point nuclear power station.

Meanwhile, the two closest completed east-west interstate links are I-84 to the north and the heavily used and most difficult to widen I-95 George Washington Bridge/ Trans Manhattan Expressway/ Cross Bronx Expressway.

As the mid-point between I-95 and I-84, I-287 continues to the west of the Hudson River, yet currently has its eastern terminus at I-95 in Portchester/Rye, and currentl lacks a continuation to Long Island- now proposed in the form of the Cross Sound Tunnel. Yet despite the clear need for additional capacity upon the Westchester approach roads, there appears to be a lack of planning for improving the approaches to this new tunnel in Westchester

That the 'mainstream' organizations would rather chip away at a vitally important project for improving regionally scarce east-west high speed road capcity, including adding that which does not yet exist- the rail component, with not a word about designing to add other components later with minimal wasteful demolition (a strange and curious disregard), let alone dare suggest other projects to place less of a reletove burden upon the I-95 Cross Bronx Expressway, speaks volumes about these organization's nature as part of a broader effort to acclimatize people to expect less butter, and more security theater state, cigarette-pharma market protection 'drug war' nonsense.
Posted by Douglas Andrew Willinger at 12:00 AM