Mexico To Ignore Madrid For Seoul? 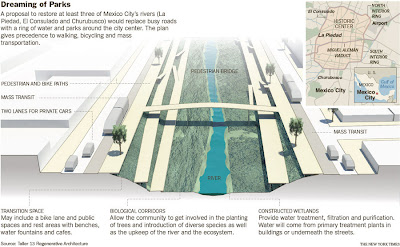 Mexico City has a river lined with roads that activists want to re-work into a more pedestrian friendly corridor.

Yet today's New York Times article fails to mention any consideration of Madrid, Spain's acclaimed project that placed the roads underground, instead maintaining the traffc flow all upon the surface- despite its superiority and that Mexico was established by Spainish people.

Instead, these activists are presenting the model of a project in Seoul, Korea which replaced a 4 lane elevated freeway and 10 lane surface road that had been built over a covered stream, with the stream uncovered and restored, but with no underground roadways to increase accessibility for the largest number of people.
Posted by Douglas Andrew Willinger at 3:28 PM