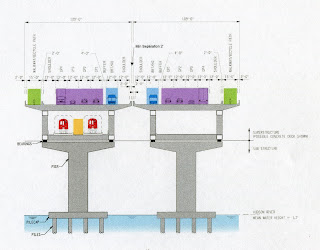 It talks about the superiority of the concept of a gap between the two spans to hold a deck for transit, compared to building an altogether seperate parallel span.

But it does not talk about the differences in cost effectiveness between the single and duel deck designs, the latter providing more then twice the space.

Whereas the median gap provides a total of 40 feet of width of roadway, the duel deck provides 60 feet in each direction. 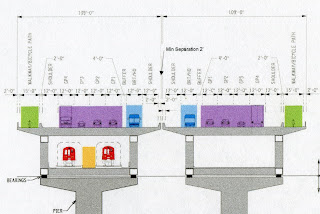 1) Allow for the incorporation of future transit on the new highway structures without reducing the number of general traffic lanes;

2) Provide for future transit across a third parallel bridge that would be constructed at a later date and that would serve as an exclusive transit right-of-way; or

These options are illustrated in Figure 2-1.

The Replacement Bridge Alternative would accommodate existing bus services across the Tappan Zee Hudson River crossing; however, the implementation of any options for future transit modes would require a separate and independent environmental review process when and if a proposal for transit services is foreseeable and financing is available. Implementation of future transit services would require modifications at the bridge landings to tie in to upland infrastructure for bus and/or commuter rail operations.

There are various options for such upland connections.

Option 1 would allow for exclusive bus lanes within the left shoulders of the replacement bridge, but infrastructure to support the upland connections to these bus lanes would be needed in Rockland and Westchester Counties.


Option 2 could provide for a new exclusive or combined bus or commuter rail bridge across the Hudson River. However, Option 2 would be costly ($2 to $3 billion) and would result in work in the Hudson River (i.e., dredging and pile driving) for additional foundations to support piers for the new structure that could be avoided with implementation of either Option 1 or Option 3.

Option 3 would allow for either or both bus and commuter rail service across the Hudson River; however, additional strengthening of the new bridge would be required to support the additional loads from any potential transit service within the gap between the new structures. The additional current cost for strengthening the replacement bridge under Option 3, to allow for any future transit service within the gap between structures, would be approximately $200 to $300 million. Should implementation of transit occur in the future, an additional approximately $340 to $620 million (in 2012 dollars) would be required to implement the future infrastructure across the bridge, with an additional $4.4 to $4.6 billion for the commuter rail infrastructure, connections, and stations. In total, the current and future structural cost for transit service within the gap would be $540 to $920 million. In comparison, a new, exclusive transit bridge across the river (i.e., Option2) would cost between $2 and $3 billion just for the new structure. In short, Option 3 would save between $1.5 and $2 billion as compared to Option 2.

Consistent with and in furtherance of the project’s goal to “maximize the public investment in a new trans-Hudson crossing,” planning for additional strengthening and a gap between the two new structures to facilitate Option 3 for transit service is considered prudent at this time. To that end, the Design-Build Contract Documents (Part 3 § 11.3.1.10.3) include specific provisions for a potential future load, assuming the American Railway Engineering and Maintenance-of-Way Association (AREMA) Manual for Railway Engineering

Furthermore, a 40-foot gap would be provided between the highway structures at the main span towers. The gap would narrow as it approaches landings, but the transit structure and its connections could be provided at a lower elevation (i.e., below the highway deck) at this location. As noted above, the tie-in at the Rockland and Westchester landings may require future modification of highway infrastructure


Then what about Option 1?

Rather then simply a 40 foot gap accomadating at best two rail tracks, Option 1 would provide about 62 feet of roadway width in each direction, easily accomodating space for 4 rail trackways allowing a much needed east-west rail freight line, something lacking in the New York City metropolitan area, at an initial cost as I was told by a NYSDOT representative at a recent TPZ bridge meeting, of $200 million (about 7% of a $3-4 billion overall project).

The TPZ EIS strangely ignores the extra economy of provided by the dual deck design, and even its potential, completely failing to assess the cost benifits of the duel deck option versus the mono-deck - listed by officials respectively as the long and short span options.

Likewise strangely: the design approved December 17, 2012 provides a 40 foot wide gap that is intruded upon to some degree of vertical clearance by the outwards canted towers - selected for some obscure or blatant symbolism rather than any utilitarian function - to ensure space for only 2 tracks, half of what we would have with the duel deck that was squashed for reasons that remain obscure.

Let's not dare forget that the Westchester side USED to have a GM factory that assembled the much under-rated, under appreciated 'X' car variants - Chevy Nova, etc. - that factory has long since ceased and has already been demolished.