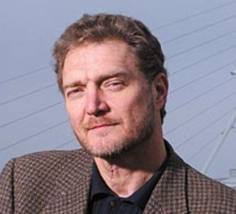 Freeways like anything need to be well thought out, and not critiqued over-simplistically

Localities that had their urban freeways depressed, that is an open trench with the road below ground level, with the money spent upon the cut, chose the best freeway option.

Those that went with elevated freeways fared worse as the money instead went to an elevated structure that needs to be entirely replaced.

Those that went with the depressed roads have the existing foundation of the cut and hence the rehabilitation funds can go towards the super structure, walls, columns, etc. and funds can be ultimately obtained via the sale of air rights.

Critical to a tamed street environment conducive to this air rights development, are center loader access ramps for the freeway- IOW the ramps to or from the freeway have short tunnels to thus not load by the left hand curb but rather from the middle. This center loader design preserves the curbside for lower speed uses, and can be seen in renderings of the proposed Washington, D.C. I-395 redevelopment project just south of Massachusetts Avenue in Washington, D.C. This design should be a mandatory retrofit for existing urban freeways- at least those built below ground level, as it has been the ramp interface rather than the existence of the mainline freeway itself, that causes the ripple of intimidation for pedestrians and to a degree local vehicular traffic depending upon the design and location of cross-streets. 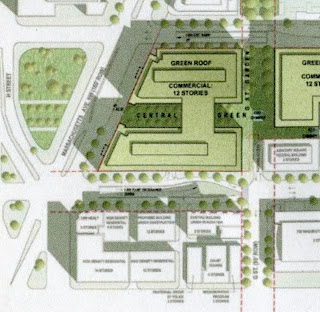 Utility, convenience and safety of freeway is shown in Yale University’s freeway experimentation project, with the idea of truncating freeway despite its “Air Rights” garage designed to accommodate extended freeway underground beneath buildings. So truncating freeway, with new Yale and Pfizer demolition specials blocking extension, was done with Yale Architectural school dean arguing against requiring developers to include necessary substructures, girders, to preserve underground easement for freeway, never-mind one of these lots being given to the developer for only $1. The traffic mess being envisioned includes having pedestrians dodge traffic to and from the freeway across an upwards of 5 lanes in each direction. Simply continuing the freeway beneath the “Air Rights” garage with 3 lanes in each direction upon the submerged freeway would have mean not 5 but 2 lanes in each direction on the surface, and with less traffic there.

New York’s Buffalo has a splendid opportunity to have the best of both worlds. We must not waste the cut by filling it in- rather we should adopt it to modern specifications beneath a new landscaped lid to better re-invoke Olmstead’s lost parkway.

Property values are affected by noise and other pollution. Sometimes traffic “disappears” when a freeway is removed, particularly when there is a grid to absorb it, and when done when much traffic disappeared for other reasons, such as an automobile fuel shortage in late 1973 and some of 1974.

Other times though the “desire line” is unavoidable, such as with the Lower Manhattan corridor. Not building the expressway, is mainly wishing the vehicular traffic away from the Holland Tunnel – Williamsburg and Manhattan Bridge triangle, local asthma rates there are comparable to those along the Cross Bronx Expressway.

Why then, have not local environmentalist and planning organizations worked towards a tunneled and exhaust filtered Lower Manhattan Expressway with drilled tunneling at its western end for preserving historic So Ho? Why indeed, have not the Holland Tunnel remained at only 2 lanes in each direction, rather than supplemented with a pair of newer tubes in each direction?

And why not as well the plausibly simpler to build Mid Town Manhattan Expressway Tunnel?  Robert Moses favored idea would have displaced too many buildings by taking a ½ wide block swath along the north side of 29th Street for a 6 lane MME; but not his alternative project of a tunneled version with a 2 lane tube under 29th Street, and another 30th Street would have provided 4 lanes, and theoretically could be supplemented with a second set for 8 lanes beneath the existing street grid right of way. Though the grid is tight, the building’s stable foundations facilitate the excavation, and mid town has a logical grid, with little or no need to demolish historic buildings.

In Northern Germany, a project to both widen (from 3 to 5 lanes per direction) and cover the north-south radial autobahn is moving forward. Undergrounding is the clear preference. Cut and cover offers the potential advantage of a direct interface into the existing street grid and the possibilities of profound surface improvements, as with a multi-model railway-highway tunnel/railroad industrial corridor dig out, resurfacing of the long buried Tiber Creek, and creation of a linear park. Drilled offers the potential advantage of deviating from the grid for a more direct route, particularly for longer routes, as set up costs become proportionately greater with the development of more durable drilling equipment. However, as done on Berlin, and as proposed in 2009 for Seattle’s waterfront, enclosed aerial tunnels via new buildings are another possibility.

The Failure to Fill The Gaps is linked to environmental and ethnic (less affluent) bias, with the more affluent areas being able to outright stop a freeway, diverting the traffic burden disproportionately upon less affluent areas.

A textbook example is the failure to complete the missing link of I-95 in western New Jersey from the Trenton area to the vicinity of the southwestern corner of I-287, which makes it less convenient for traffic to use I-287 to go around New York City rather than staying on I-95 via the Trans Manhattan and Cross Bronx Expressways. Another is the failure to complete a mid-town Manhattan expressway tunnel facility, which would provide some relief for Queens-Brooklyn/Long Island bound traffic. Others are the failure to build freeways in northern Washington, D.C., leading to a disproportionate burden upon the areas just east of the Anacostia River, with the ghastly configuration now present in the vicinity of East Capitol Street, along with the ghastly failure to let decades go by without a cut and cover project to both modernize and expand the freeway and to do so in a fashion to engender a more livable local environment, placing freeway underground beneath a boulevard with landscaped linear park. Freeways by their nature and scale are amiable as the foundations not merely of allowing the mass and fast movement of vehicles, but also as a platform for cover-way uses, as a linear park, town square and buildings; and as a figurative or literal backbone for various transit-ways.

These can be barrier separated lanes that can be assigned any of a number of uses, HOT/HOV/bus or even ultimately, express truck lanes, as expansion of the expressway corridor can ultimately include a roughly parallel railway, with modularity of designing said corridors for such ultimate expansion achieving a greater bang for the buck. Bang for the buck is a concept evident with the ‘duel deck’ option shown on New York State’s I-287/I-87 Tappan Zee Bridge replacement. According to a N.Y.S.D.O.T. representative at an official presentation in 2011, the duel deck option would cost about $200 million more for the basic structure- adding any roadbed would be additional. That would be substantially less costly than adding a separate parallel span, an idea the project’s EIS compares not with the duel deck, but with a third idea, of straddling the “median” area, which would provide less such added road-space (and with the “H” Honda tribute outward canted towers would run into vertical clearance issues with such rail cars).


As of late March 2013, the group Riverkeeper has thrown in the towel regarding the issue of ultimately adding rail transit to I-287. In the meantime, the greater New York metropolitan region has NO Hudson River crossing for freight rail anywhere south of the crossing at Selkirk, near Albany next to I-90. To avoid the 141 mile each way diversion, authorities are looking at a double-stack rail only tunnel beneath New York Harbor connecting the I-78 corridor in New Jersey with Brooklyn at a cost of $4.8 billion for s single track or $7.4 billion for a double track. Yet it throws away the opportunity of a rail crossing that would eliminate much of that diversion at a fraction of the cost, with far greater capacity and a greater bang for the buck even if the $200 duel deck figure is not quite double stack height. http://en.wikipedia.org/wiki/Cross-Harbor_Rail_Tunnel

Freeways and railways serve important functions and should not be broadly judged upon worst case/least useful examples. The cancelled freeway in Milwaukee has a parallel freeway to the south, while the cancelled New Orleans Vieux Carre freeway had relatively little utility though with an interesting segment built, a short cut and cover tunnel segment.

Meanwhile urban railways once included what we would call the ghastly juxtaposition of steam locomotives right outside people’s windows- imagine that on the front cover of a book. Perhaps New Orleans might discover the utility of burying freeways within earthen flood control walls, taking the concept of tunneled roads into yet another dimension.
Posted by Douglas Andrew Willinger at 10:00 AM