New plan for Houston, Texas, to remove freeway link and replace with extra capacity along another via widening to INCREASE eminent domain use- property displacement!

Would eliminate the southern portion of the Pierce Freeway - an elevated segment of I-45 -- and reroute such along I-10 and I-69 respectively along the northern and eastern sides of the central business district, requiring their widening.. 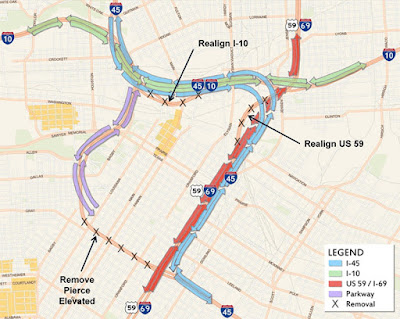 The article makes much ado about the removal of the southern portion of the Pierce Freeway, the elevated viaduct just to the west of the Houstan CBD.

Currently,  I-45 comes down from the north, crossing to the south of east-west running I-10, before turning south-easterly to cross to the east of I-69.

The northern portion of the Pierce would remain as a 'downtown connector'.

"On the bright side, TxDOT is proposing to tear down the Pierce Elevated Freeway, which could open up 20 to 50 blocks of downtown for walkable development. The plan also calls for aligning I-45 with U.S. 59 to the east of the city, burying the roads in a trench capped with a park.


“The impacts on walkability and urbanism are real and are a big deal,” said Jay Crossley, former director of the smart growth advocacy group Houston Tomorrow. “If they could only do those parts of the plan it would be an amazing plan.”

The idea of reconstructing U.S. 59 (which is co-signed as I-69) and currently an 8 lane elevated viaduct into a new trench beneath a new cap is a good one.

But what about that of doing that as a significantly wider Route 59/I-45/I-69 freeway, thus requiring substantial property acquisitions in order to replace the capacity lost with the removal of the Pierce Freeway?

The other portions of the downtown freeway system to be reconstructed would retain their existing basic configurations- aka surface and elevated, while gaining capacity.

Should not freeway reconstruction aim to not only maintain or increase capacity but also to change the configurations - aka reconstructing below ground - to improve local connectivity and otherwise mitigate local environmental impacts?

What consideration has been given to doing so by lowering and eventual covering of the Pierec Freeway?