Best Bang For the Buck- 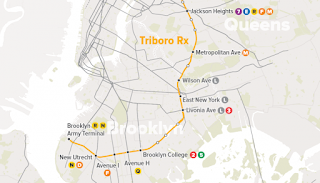 - Provides an all new parallel vehicular route to the Brooklyn-Queens and Gowanus Expressways, avoiding construction disturbances to traffic upon those roads, and ultimately ease their future reconstruction, as well as better serve JFK Airport.


-- westward via an all new Cross Harbor Tunnel,


-- northward via new tunnel connections to the Bronx,

Cross Brooklyn Expressway was planned during the 1950s and 1960s to be routed by the Bay Ridge LIRR corridor, with different ideas for fitting it within the corridor's 80 foot wide middle segment, by the mid 1960s as a multi-level elevated facility, and by the late 1960s with multi-level cut and cover tunnels with new IRT line and new development atop, known as the 'Linear City' proposal.

This proposal would combine a revived Interboro and Cross Brooklyn Expressways with an IRT X line conceivably expanded to include a spur to JFK Airport, in a design building upon what was developed with the previous 'Linear City' proposal, with the concept of enclosing the Expressways and the Railroads within box tunnels, but with a continuous linear park.

It would start the Interboro at the New York Connecting Railroad junction with the I-278 approach to the Triborough Bridge, reconstructing that segment to create the new junction.

The Cross Brooklyn Expressway would be built to accommodate extensions to the west and to the east, respectively: a Cross Harbor Tunnel to I-78 in New Jersey, featuring vehicular expressway and rail lines (freight and IRT); and a Expressway and IRT continuation to JFK Airport, and beyond via the east-west portion of the Belt Parkway with added carriageways and decking, to the Sunrise Highway Corridor.

Provides new enhanced transport corridor facility via existing underutilized corridor roughly paralleling the existing BQE-Gowanus, without requiring any disruptions to that existing corridor-facility; and ultimately could accept traffic diverted from that existing corridor-facility to make the later reconstruction of such more practical.  It would be easier to eventually construct a tunneled replacement for the BQE-Gowanus when there is a parallel facility to divert much of the traffic.  Would likewise provide such a benefit to the VanWyck Expressway, facilitating the latter's eventual reconstruction with greater capacity and undergrounding.

Posted by Douglas Andrew Willinger at 12:04 AM