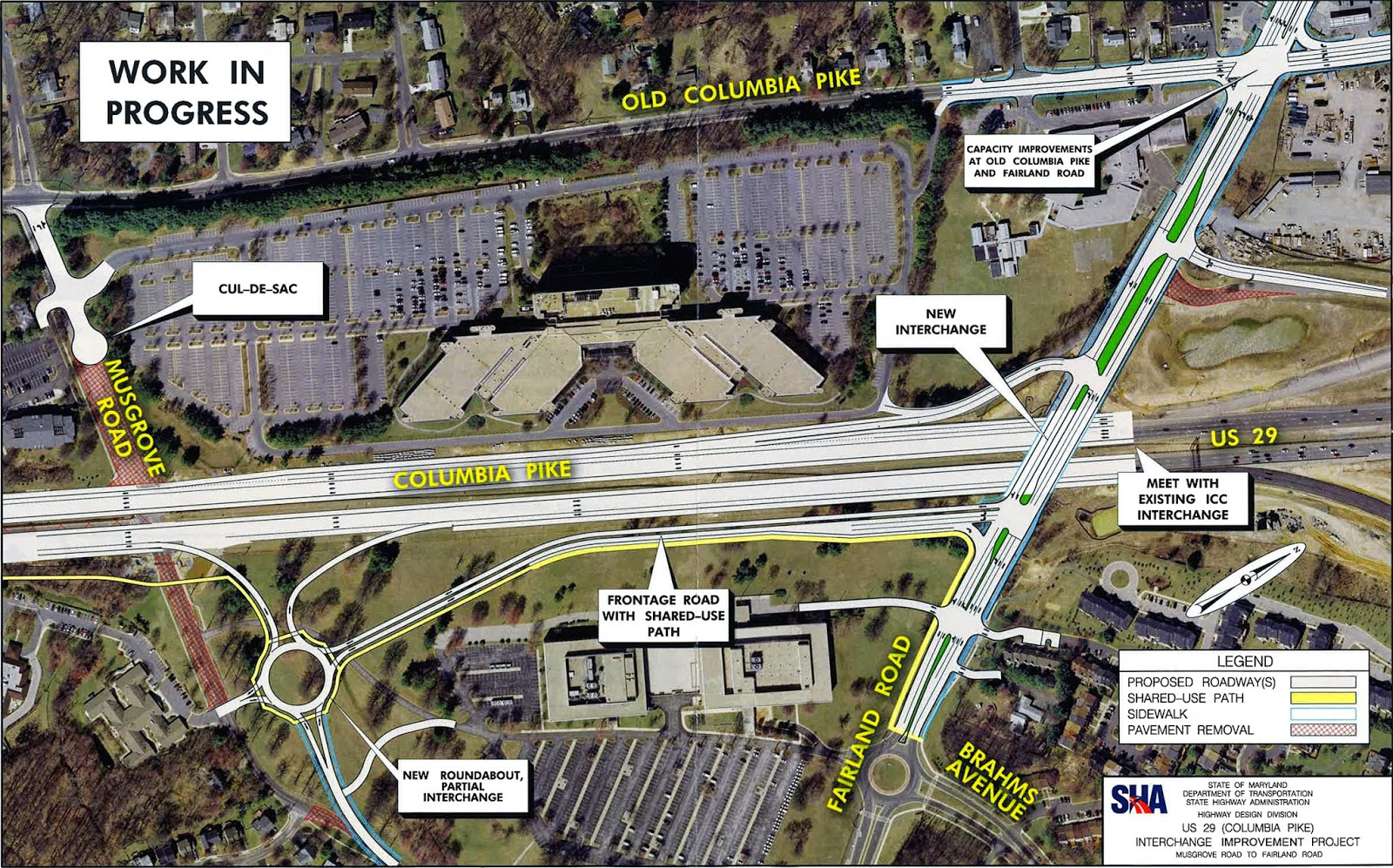 The GGW article, "Expand a highway to get a sidewalk.  How about just build the sidewalk?"  authored by Dan Reed, creator of the blog Just Up the Pike reports negatively upon MDOT's new project for a segment of MD Route 29 in Fairland, Maryland, about 15 miles northeast of Washington, D.C. involving creating some new walkways/bike paths, the partial closing of an at grade intersection and the replacement of anther with an overpass.

The article is particularly negative about the project's creation of a grade separated interchange for the currently at grade traffic light intersection of Route 29 with Fairland Road for a new overpass the carry the latter (a local road) over the former (a 6 to 8 lane major arterial that's generally a freeway with a few remaining at grade intersections though with most others already replaced with overpasses.

It makes some sense, particularly in noting the elimination of the Musgrove Road crossing of 29, maintaining its access to and from northbound 29 but making it a dead end on the northern side, though failing to bring itself to suggest a new grade separated there- even if only for pedestrians and cyclists!

Likewise it notes the greater development in the suburbia-exurbia creating the 10% increase in vehicular traffic since 2006.

Alas the article hobbles its sensible suggestions with its anti grade seperation dogma.

It notes the need to improve bus service on the 29 corridor though alas without noting the need for greatly improved bus stops- mini stations.

It notes the lack of space for grade separated interchanges, or rather more correctly, those of the sprawling type seen in the suburbs and rural areas further south into Silver Spring and Washington, D.C., which limits the 29 freewayification to the area north of New Hampshire Avenue to I-70.

Yet that ignores the clear advantages of 29 as a full freeway to the north of New Hampshire Avenue for increasing bus line speed over the relatively longer distances to this new development.

And most starkly, the article makes no mention of the proximity of the Route 29/Fairland Road intersection with the recently constructed grade separated interchange with the Inter County Connector Freeway (ICC).

Instead the article rests upon dogmatic statements as:

Research shows that building more roads in an effort to cut congestion is actually counterproductive. The roads eventually just fill with more cars as drivers use the new road space to drive more or longer distances than they used to.


That makes no acknowledgment of the greater efficiency of freewayification that the existing lanes can thus carry more traffic.

Would not it be better to advocate improved grade separated crossings for pedestrians and cyclists in addition to automobiles?

Why so much dogmatic negativity rather than a more holistic approach that actually addresses the area in question?

Why not call for a new grade separated interchange for Musgrove Road, as well as Fairland Road, with wider sidewalks than that now proposed for the latter?

Indeed, if one wants to really better connect the area, how about a plan for such new grade separated crossings to ultimately flank a new air rights lid atop 29 for new development, built over time in stages?