London's Mayor Boris Johnson follows up his previous proposal for an underground 'orbital' motorway tunnel, that would essentially serve as a replacement for a 1960s-early 1970s plan for a "motorway box", with a pair of two new east-west motorway tunnels.

The new proposed tunnels, with a combined length of about 26 miles, are shown in this map below in blue: 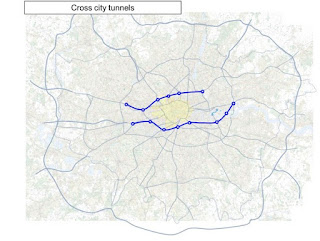 These two main east-west tunnels would be accomanied by 9 new 'fly-unders' at various points throughout London.  A better map of all of this can be found here:

The northern tunnel - the Northern Cross City Corridor -would be 18km in length, connecting at Park Royal to the west with the A40 - the main highway for Birmingham, Manchester and Liverpool, and to the east in Hackney Wick with the A12 towards Dover.

Mayor Johnson stated that the tunnels could cut congestion in central London by 20%, and be funded by tolls.


The map above has been accompanied by a artists rendering of the redeveloped space atop. 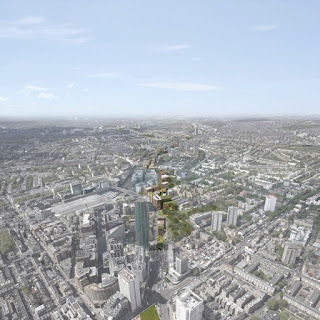 The space atop these tunnels and fly-unders would feature new development.  Such real estate development, plus tolls are being promoted as ideas to pay for the tunnels' construction.