Places ideology over needs via opposing seriously needed road projects,
such as widening I-95 in Connecticut, and a Tunnel in Pasadena, California
to establish a continuous I-710 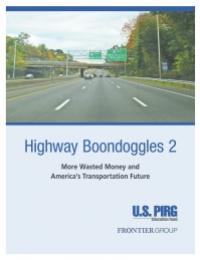 The report lists a series of highway projects which it deems as questionable, based more upon ideology against any highway capacity expansion projects than an understanding of local and regional needs.

Two particularly egregious examples of this is their opposition to widening I-95 in Connecticut with one additional lane in each direction from its existing 3 lanes in each direction configuration that it was originally built with during the 1950s, and to the idea of a tunnel to eliminate the I-710 gap in Pasadena, California as the least locally impactive method, following the past rejection of conventions surface and cut and cover designs.

Connecticut I-95 is that state's sole grade separated open to mixed traffic highway in the densely populated  20 mile wide band along the coastline along the Long Island Sound, with the nearest such parallel highway I-84 being some 20 miles inland, with the 2 lane per direction Merit Parkway (closed to trucks and commercial traffic) some 4 miles or so inland the sole such other grade separated highway option between, and is paralleled by the Northeastern railroad corridor that carries rail cars from New York to Boston.

I-84 would be the physically easiest to widen, but is the furthest from the densely populated coastal area.

The Merit Parkway is significantly closer to I-95, but is politically difficult to widen owing largely to its iconic bridges which would have to be realistically either reconstructed or twinned, and would still not be suitable for large trucks.

The parallel railroad should be upgraded to permit improved rail service.

But I-95 should still be widened.

Favoring one mode of transport should not mean neglecting capacity improvements to the other.  Highway and rail can relive each other to varying degrees more than they can altogether substitute for one another.  Rail is more adaptable to absorbing longer distance trips, while highways are more suited to many other trips owing to the time savings of direct door to door service.  Expanding both provides for future growth and increased human activity within a given developed area thus somewhat relieving pressures to expand development into more pastoral rural areas.

I-95 in Connecticut should ideally it should be 12 lanes with a 3/3/3/3 or so separate carriageway configuration, akin to that of much of the New Jersey Turnpike, at least from the New York line to past New Haven, as it would accept and distribute traffic to the sole east-west interstate highway just south of the N.Y. line in Westchester County (and conceivably from a bridge and or tunnel crossing of the Long Island Sound to existing Route 135 in Long Island)- I-287.

As such a "duel barrel" configuration would have relatively high right of way requirements, a more feasible option would be widening it from a 3/3 to a 4/4 or 5/5 configuration, designed with a long term staging plan for parallel carriageways, with segments built in spots where more needed and more physically practical in an outboard configuration, designed to be later made continuous with added segments that would tuck underground beneath the existing carriageways to reduce local impacts.  Such a staging would be financially more practical, with the design including the road substructure to permit the later excavation of the underground segments without having to tear out the road.

To further reduce impacts, portions of this widened I-95 should be designed to accommodate various decked segments, with local overpasses made wider to include better pedestrian and bicycling connections, and with some provisions for future air rights development.  Perhaps certain elevated I-95 segments, as that in New Haven could be reviewed for reconstruction in a fashion via enclosures through new buildings, with access ramps reconstructed via a center rather than a side loader configuration for better accommodating vehicular and local pedestrian traffic.

To help relieve Connecticut I-95, particularly from I-287 in New York to past New Haven, the eastern portion of Westchester I-287 should be widened to at least a 5/5 configuration to I-684, which itself should be widened from 3 to 5 lanes in each direction. 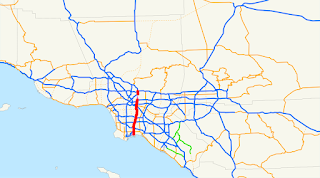 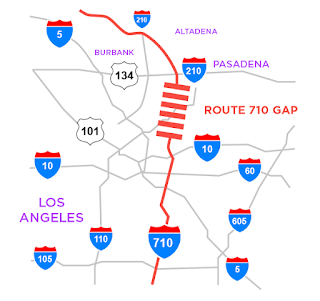 This is a longstanding gap in the highway network in need of filling.

It initially resulted form the physical reality that the area of Pasadena, California is largely older more historically significant architecture built well before the mass freeway era, and from poor planning decisions to permit mass real estate development construction in a band to the west, particularly without any consideration there for the idea of doing such atop a cut and cover-box tunneled freeway.

Past plans for a conventional surface cut freeway through the long established Pasadena residential neighborhoods would die political deaths owing to popular revulsion over the demolition and/or moving requirements.  Likewise with later plans for a tunnel via the cut and cover method for that would have likewise involved surface displacement though without such permanently, particularly if the existing buildings were replaced or re-situated atop.

Subsequently, the official planning has turned to completing the I-710 missing link via a tunnel that would be moled (IOW drilled or bored) hence not disrupting the surface for almost all of its length, with the exceptions being for its relatively brief cut and cover transition segments at each of its ends, and for any ventilation components.

Current planning is for either one or two tunnel tubes, each with 2 levels, each with 2 lanes and a shoulder, providing a total of 4 or 8 lanes in total. 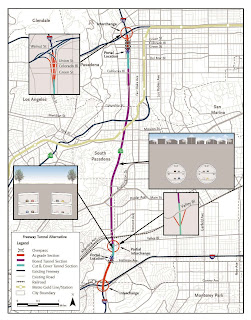 The 710 Tunnel project is a vitally important project for Pasadena and for the Greater Los Angeles area, for providing local relief for 710 traffic that must now detour to local streets or to parallel regional freeways as I-5, 170/101, and I-405.  It would be about 4.9 miles long, connecting freeway stubs each with 3 or 4 lanes per direction.  It is estimated to have construction costs of $3.2 to $5.6 billion, and would receive funding from tolls of about $15 for trucks and $5 for most other automobiles while providing savings in time as a relatively continuous high speed route.

LA's north-south freeways are particularly badly congested largely owing to the east-west mountains to the north separating LA from the San Fernando Valley, blocking the construction of capacious parallel routes via the local street grid.

A continuous 710 is particularly important for the port of Long Beach, with 710 already a major truck route.

LA's transportation problems also stem from a lack of a comprehensive passenger rail network, caused by the foolish decision to rip out its rail car transit system during the mid 1900s.  And 710 completion opponents may well be right in their prescription for various additions to the region's sorely in need of expanding rail transit system.  But they are wrong in outright opposing the 710 completion project for a drilled tunnel link, and would be better in asking for a broad transportation planning vision for rail and highways, perhaps one via splitting the 710 project into stages with the initial construction of a single double decked tunnel tube with the extra funds diverted to the transit projects before the future construction of an addition tube or tubes.

Perhaps there might be better economy to replace the double-decked 2x2 tube design with a larger diameter accommodating a 2x3 lane configuration?  Or perhaps one featuring the former to accommodate trucks, accompanied with a lower height version of the latter for accommodating most other vehicles?  Such would provide a total of 10 lanes with 4 for trucks and 6 for smaller vehicles, and should be evaluated together with options for staging either 2x2 or 2x3 double level tunnels so staged to ultimately provide 2 or more separate tubes.

With the LA region so starved for north-south cross mountain road capacity, throwing away any capacity for future additions, whether via highway or via railway should be viewed as criminal.

PIRG would do so much better by eschewing its reactionary ideological opposition to future highway capacity expansion to a more balance view that would instead debate how projects should be staged, permitting some highway expansion together with rail transit additions, rather than simply the latter.

Likewise, various DOTS need to include the idea of future staging into their basic designs allowing future capacity additions with minimal demolition of existing construction.   For instance, the recent I-405 widening project should have been designed to accommodate future capacity additions, if not for continuous outboard or elevated carriageways, should have taken advantage of any space for access into parallel tunnelways, either directly beneath the existing mainline with the necessary substructure to permit excavation beneath without having to rip out the road/and or for such as a moled tunnel.  Consideration of such staging should likewise not reflect the narrow transit only ideology prevalent in PIRG, via not excluding designs to help facilitate adding a future transit line.