An intriguing idea to expand La Guardia Airport with expanded runways achieved by new landfill displacing Rikers Island, with a new set of entryways in the Port Morris area of the South Bronx, accompanied by upgrades to the passenger rail system- all well and good. 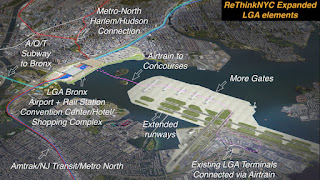 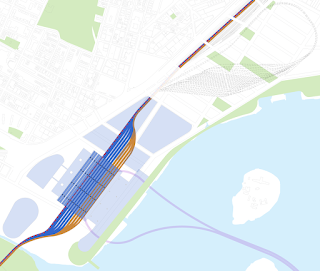 Would establish new supplemental entryway to La Guardia in the South Bronx, thus traffic from the north would no longer need to cross the Triborough or Whitestone Bridges, with access to the rest of the airport via a dedicated rail loop 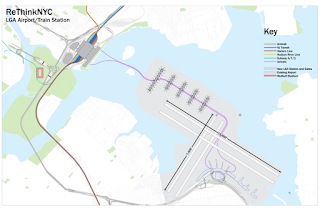 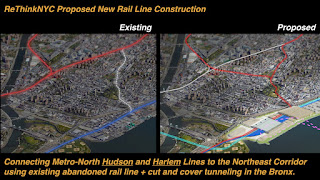 Would connect with all three northern radial Metro North Railroads, thus travellers from the north could arrive by any of the three Metro North railroad lines.
The train station would include a new stop for Amtrak.

That's an idea that builds upon late 1800s and early 1900s planning proposals to develop this Port Morris area, such as an 1883 proposal for a new convention center, and latter with the idea of continuing the denser development seen in Manhattan further forth, for which the New York, Westchester & Boston railroad, which opened in 1911 had anticipated. 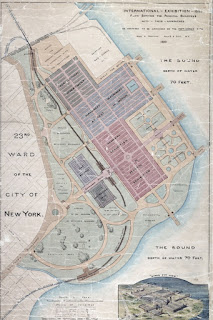 The area north of the convention center would be built at an urban scale.  To the west is the Bruckner Expressway, which prevents connection between Port Morris and neighborhoods to the west.  We would bridge this divide through a proposed new "ambassador" building on the west side of the Bruckner at 142nd Street, which would allow people to enter on that side of the expressway, but the building would also serve as a bridge over the Bruckner that would connect to the entire complex.


This proposal needs further work regarding the highway network, particularly as the Bruckner segment along this area is an unsightly elevated freeway- hence placing a building atop it in this configuration would be ungainly. 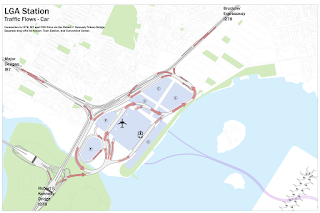 Should ultimately include a complete replacement-reconstruction of the southern Bruckner Expressway- an unsightly elevated highway. 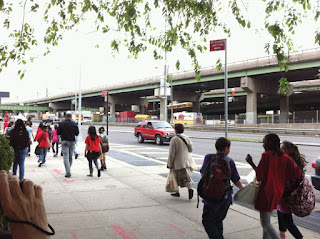 What To Do About The Bruckner Expressway:

This elevated freeway, with 3 lanes in each direction is unsightly, locally divisive, lacks shoulders, lacks access ramps to this proposed airport entryway complex, and is under-capacity for accepting traffic from the northbound Willis Avenue Bridge from Manhattan.

It does provide a fantastic view through the windshield for travellers heading south.

To the west it is paralleled by a 4 lane wide southbound surface Bruckner Boulevard.

To its east it is paralleled by a 2 lane wide northbound Bruckner Boulevard with buildings, from its southern end to 142nd Street, where the railroad then meets it to run immediately alongside.  That railroad is at a lower grade.

Ideally there should be a new line of buildings designed to reconnect Port Morris with the neighborhoods to the west in the place now occupied by the elevated freeway structure, which should be torn down, with new parallel freeway roadways, with either both directions within new cut and cover tunnel(s), or with the northbound direction in a new cut and cover tunnel, and the southbound direction elevated as the roof of a new line of buildings.

Because the existing elevated freeway must remain in operation throughout the construction project, the first stage would be constructing a new cut and cover freeway tunnel beneath the surface road to the west.

As the Re-Think NYC proposal envisions demolishing the buildings already along the Bruckner's eastern (northbound) side, it could likewise construct a cut and cover tunnelway there as well.  To the north of 142nd Street, this could be done via the existing railroad right of way with the tracks relocated eastward, and with this rail corridor planned to be decked over.  The historic New York, Westchester & Boston RailRoad Station at the north side of Hunts Point Avenue should not be demolished but rather propped up with new supports and retained either in its exact same location or slightly re-indexed eastwards. 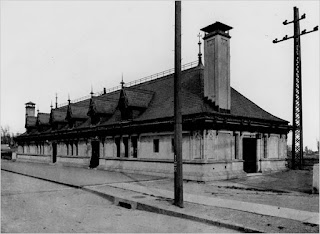 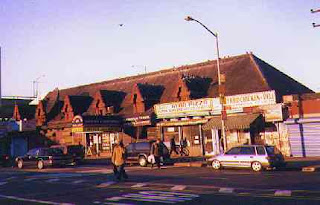 
Each of these cut and cover tunnels should ideally be at least the of 4 full width lanes plus shoulders.  This might involve some building removal on a brief section of the north side in addition to that one the south side already envisioned by the Re-Think NYC proposal.  This should likewise be designed to tie into the existing 4 lane short tunnel for Bruckner Boulevard traffic beneath the Bruckner Expressway-Deegan Expressway interchange with the approach to the Triborough "RFK" Bridge.  That tunnel should be lengthened both to the south-west to Brown Place, with local street access and a gentler curve displacing the gasoline station there.  And it should be extended to the north-east, with at least one full lane joining into and continuing via an additional lane of the reconstructed Bruckner Expressway.

Once the new cut and cover tunnels are in place, the elevated Bruckner should be demolished, and replaced with a line of new buildings.  Optional would be the idea of an elevated roadway upon its roof; as the purpose of that would be to continue the tradition of the southbound vista through the windshield, this might done only for the southbound direction.  A variation of this would be to have an arial tunnel within one of this structure's upper levels, ala the "Choppway" proposal a few years ago for the replacement of Seattle Washington's elevated double decked Route 99 Freeway. 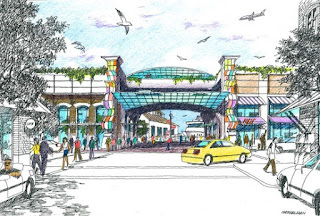 However, because of the need to retain the existing elevated freeway throughout the reconstruction, this project would have to include at least one cut and cover tunnel on one or both sides of the existing structure- a basic design configuration furthermore favored by the practicalities of establishing on ramp and off ramp access.   Also, the construction could be staged to add an additional cut and cover carriageway between the two new outboard tunnelways once the existing elevated Bruckner is removed.

To the north, the new cut and covers could do wonders for removing the blight of the existing roadways at the mouth of the Bronx River, for both the continuation of the Bruckner and for its connections to the Sheridan.

Such a cut and cover tunnel Bruckner Expressway reconstruction should extend to Boynton Avenue, thus eliminating the elevated berm segment to the west, meeting the existing Bruckner corridor where the freeway is at ground level, and has the option of transitioning to the service roads to access the Bronx River Parkway.

Such a cut and cover connection for the Sheridan should extend to Westchester Avenue, which is build-able via re-indexing the adjacent railroad to the east.  Further north, portions of the Sheridan should be decked over taking advantage of the topography of the hill to its west to better connect that area with the Bronx River waterfront, such as between E 172 and 173rd Streets.

The new Bruckner Expressway would of course have greater capacity than the existing 3 lane in each direction facility.  The new set of outboard cut and cover tunnels with 4 lanes apiece flanking an inner set with 2 lanes per direction built after the demolition of the elevated structure would provide an upwards of12 lanes, thereby accommodating continuous on lanes for traffic from the northbound Willis Bridge and to and from the new airport access ramps.  Of this, 8 lane would continue to surface at Boynton Street, with a lane apiece to and from the service roads, the remaining 6 lanes with the 6 lane surface Bruckner Expressway, and 4 lanes to the north for the Sheridan.  Providing this extra capacity would allow more traffic to be underground, thus allowing for a more pedestrian friendly Bruckner Boulevard.

With this thought, the project should include such ramp connects into the Hunts Point Market.

With the additional of such a significant amount of landfill displacing Rikers Island, another idea comes to mind- what about taking advantage of that to create new roadway crossings between the Bronx and Queens?

With the Triborough "RFK" Bridge heavily used, even though the "Re-Think NYC" plan would divert some of its traffic by no longer requiring its use from the north to access La Guardia Airport, it would be prudent for long term planning to ultimately seize the opportunity provided by the landfill for the new runway space.

The logical place would be the area of the Grand Central Parkway-Brooklyn Queens Expressway interchanges.

Not simply as the junction of these two highways, both of which are heavily used.

But because that's the location of a rail corridor that has already been studied and proposed as the location of a new interstate highway running roughly north-south between the two roughly parallel highways of the BQE and the Van Wick Expressway.  As planned during the 1960s it was to be known as the Interboro Expressway, and would connect directly with  the contemporaneously planned Cross Brooklyn Expressway.

For a good historic overview of the previous planing for the Interboro Expressway, see the account by NYC Roads Steve Anderson:


Accordingly it was canceled by 1973.  As planned during the late 1960s-early 1970s it would have included reconstructing a portion of the existing elevated IRT as a subway with the below ground level freeway.  As I have not seen any detailed plans, I don't know if any of the latter planning included any segments as coverways (cut and cover tunnels), rather than simply as an open depressed freeway.

A revival of the Interboro Expressway has been proposed by Peter Samuel's via his publication TollRoads.

As it is a relatively narrow railroad corridor that is generally below grand level, passing through residential area, it would have to be constructed primarily within a tunnel box, and covered with new linear parkland.

Connecting with a Cross Brooklyn Expressway likewise built primarily by tunnelways, this Interboro Route would provide a valuable link into Brooklyn and towards Staten Island and Long Island.

A could be connected to the Bronx by a curved tunnel contained beneath the Re-Think NYC La Guardia Port Morris facility, directly into the Deegan.  Optionally that could include ramp connects to and from the new Bruckner and the Hunts Point Market.

A tunneled extension of the Bronx River Parkway could connect with the BQE-Interboro-Grand Central Parkway, though its logical connection with the latter as a parkway would be best done in conjunction with a demolition-reconstruction of the western portion of the existing La Guardia complex, owing to the geometry.

Such a connection would thus establish a seem-less link between the southern end of New York's longest Parkway -- the Bronx River - Sprain Brook - Taconic which are all really one freeway from the South Bronx towards Albany -- and the Grand Central - Cross Island - Northern State Parkways.

None of these projects would have to be all built at once or together.

Rather they could be built in stages, starting with the incorporation of their initial segments within the "Re-Think NYC" La Guardia expansion project, and within the reconstruction of the adjoining Bruckner.

Including the tunnel box within the new clearing and landfill would be comparably easy compared to failing to plan them and adding later.  As these would be additions between the existing 8 lane Triborough/"RFK" and 6 lane Whitestone Bridges, they could suffice with a minimum of 2 lanes in each direction apiece.

The Deegan-Interboro Connection would provide a valuable bypass of the Triborough "RFK" Bridge and its antiquated Queens approach.  Of course the Deegan should be rebuilt to full 8 lane specifications, as I have previously written about, and its east west segment from Willis Avenue to at least towards Brown Street, should be decked over.  Serious consideration should be given to reconstructing this freeway further to the east at a lower elevation to be likewise decked over as far as practical for connecting with the Triborough"RFK" Bridge, with new parkland atop, more consistent with the spirit of the 1883 Port Morris planning.

Because of their use of the footprint of the La Guardia expansion project, most of this new tunnel crossing construction would not disturb existing neighborhoods nor traffic.

Posted by Douglas Andrew Willinger at 12:31 AM