NYC West Side Highway in A Box 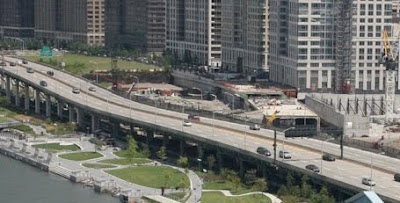 A Sampling of Attitudes 6-0 for the good guys

Neither Westway nor the Big Dig: It's Highway-'na-Box

The Times unpacks the somewhat confusing pile-driving that's going on in the backyard of Avery, Rushmore and friends. The short version: They're building a highway in a box (or a box for a highway) so that the West Side Highway can eventually be rerouted into this box from 59th Street to 72nd Street. The speedy development of the ex-Trump land into more apartment buildings is pressing the issue, because the road and the towers have to be built kinda sorta in concert with each other. The good news? Riverside Park South will eventually be expanded and spiffed up—we think—based on the added tiny green trees in the paper's handy dandy graphic here and above. And when have those little green trees ever lied?
· The Surprise in This Box? A Highway, Some Assembly Required [NYT]
· Avery Getting a New Riverside Friend: Rushmore [Curbed]

1.Trump offered to do this exact same thing when he was first putting those buildings up.

Congressman Jerry Nadler killed the plan based on a petty personal vendetta against Trump.


2. The relatively new viaduct (for the elevated west side highway) is the worst example of blight for the riverside south park users. Burying the highway will benefit all users: pedestrians, bicycle riders, joggers etc. However, those most helped will be the owners of the western facing, low floor apartments at riverside south or trump place, whatever it's called now, since many of these units face or look up to the viaduct.


3. Anyone with more knowledge than I have of Olive Freud's concerns care to suggest what her objections to this may be?

I still don't understand why there was so much resistance to Westway.


4. So can anyone tell me why Olive Freud would be against this? I never understood why Westway was objected to so much. Intead of having a 6 lane highway at grade that pedestrians have to cross while cars invariably speed through red lights (happens all the time where I live) we could have had the same highway out of the way underground. After a little bit of research it seems that striped bass were in danger and there was this general feeling that automobiles were bad. We still have speeding cars on that fricking highway so what was achieved except saving some striped bass?


5. VDH - as I read the article, It seems that Olive Freud's argument is that there should be no West Side Highway at all - either at grade, elevated, or underground. Which, of course, is idiotic. Obviously there needs to be a highway there, and just as obviously, it would be better for everyone if that highway were below ground.


6. Olive Freud sounds like an anti-environmentalist who has this childish idea that he/she should be able to just push it all away. So was the case with the idiotic anti Westway movement which promoted the idea of transferring highway moneys to rail transit as a distraction from the bloated military/law enforcement/prison industry. Since the striped bass are primarily along the shore line, revive Westway as a barrier island, hence creating more habitat for the striped bass. 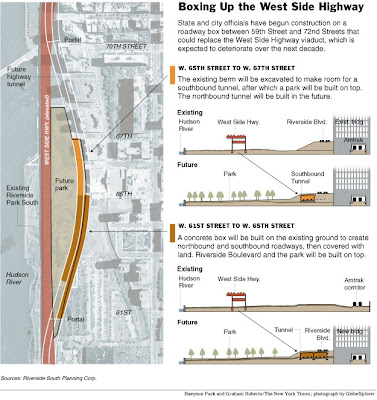 Manhattan Tunnel Structure Is Built for the Long Term Tunnel being built now may someday replace
viaduct but it will be years.

Wedged up against high-end, unfinished buildings on New York City’s west side, crews are building the northern half of a “tunnel to nowhere.” But private advocates are betting that by building the 0.8- mile-long box structure now, the city will benefit in the long run.

The goal of this tunnel, which represents the 15-year-old efforts of the Riverside South Planning Corp., is to someday replace the Miller Highway viaduct along the Hudson River. Along this stretch of waterfront, private developers Extell Development Co. and the Carlyle Group are constructing a 77-acre complex of office buildings and condominiums. They acquired the land from Donald Trump and his Hong Kong partners last year. Two buildings are under construction and eight are completed.

Because of RSPC’s successful arguments, the city asked Extell in 2004 to take advantage of existing excavation for tower foundations to build the tunnel structure’s northbound half. The original plan had been to build a support structure for a future 28-acre park and new Riverside Boulevard. But by building the box structure instead, builders won’t have to rip up the park atop it later in order to relocate the highway. Michael Bradley, RSPC’s executive director, says this will save at least $25 million. The viaduct would have had to be rehabilitated again someday, but by building the tunnel box now, the city can reroute traffic to it when that day comes, he points out.

Highway relocation had not been a top priority for the developer or city. The city spent $89 million in the early 1990s to rehabilitate the viaduct. “It was an example of making an investment without foresight,” says Alex Garvin, former New York City Planning Commissioner. “If in the future, money is available to rebuild the highway, it can go underground and the money will have been spent well. The quality of life will be enormously improved.”

Samson Construction Co., Hicksville, N.Y., is working on the $12-million first phase of the northbound box structure, about 250 ft long, 45 ft wide and with a 30-ft elevation.

Samson will complete the job by spring 2007, says Joe Montano, Extell’s director of construction. It required steel piles to be driven as deep as 60 ft into bedrock, says Montano. The concrete walls, up to 3 ft thick, were built to two-thirds the total elevation. Samson now is building customized formwork to pour the top third of the walls and the ceiling monolithically, says Joe Cursio, Samson’s chief operating officer.

Crews have only 20 ft between the tunnel wall and new buildings to work with as they relocate scores of utilities, including a 20-in. water main, a 48-in. storm sewer and future conduits for future buildings. Because of work done to build tower foundations, Samson only had to excavate about 10 ft for the box.

The state Dept. of Transportation, using $15 million in federal earmarks, will build the southbound half once Extell is done. However, it is still awaiting federal approval of the financial plan and does not know when that will occur, due to the possible reactivation of a 2002 lawsuit contesting the environmental impact statement for the tunnel project, says a state DOT spokesperson.

Advocates hope viaduct along Hudosn will be replaced by tunnel built underneath park.