So far the official planning for the reconstruction of I-81 through downtown Syracuse New York:

Sandbags below ground freeways with inadequate and wasteful designs.

Tunnels that are either needlessly deep or long thus increasing construction costs.

With downtown tunnels and open trench designs all hobbled by need to connect with existing elevated I-690 segment, thus presenting ramps that sever street intersections.

Thus leaving the sole freeway option of a rebuilt viaduct  -- without any discussion of innovative underside design.

With the sole remaining no freeway option of a mere boulevard, that's going to cost $1+ Billion anyway, effectively steering the decision process to that latter option.


These were the downtown freeway options considered:


The difference in the downtown Almond Street Tunnel and Trench Options is the location of the northern end: either Genesse Street to south of  I-690, or Butternut Street to the north.

Because of the ramp connections to elevated I-690, the tunnel and trench options would severe a number of local streets: Erie Boulevard, Water Street, Washington Street, Fayette Street, Almond Street (to Northside), McBride Street(to Northside), and VanBuren Street.

Meanwhile, the options to eliminate the freeway for a surface boulevard were all at about $1.0 billion. 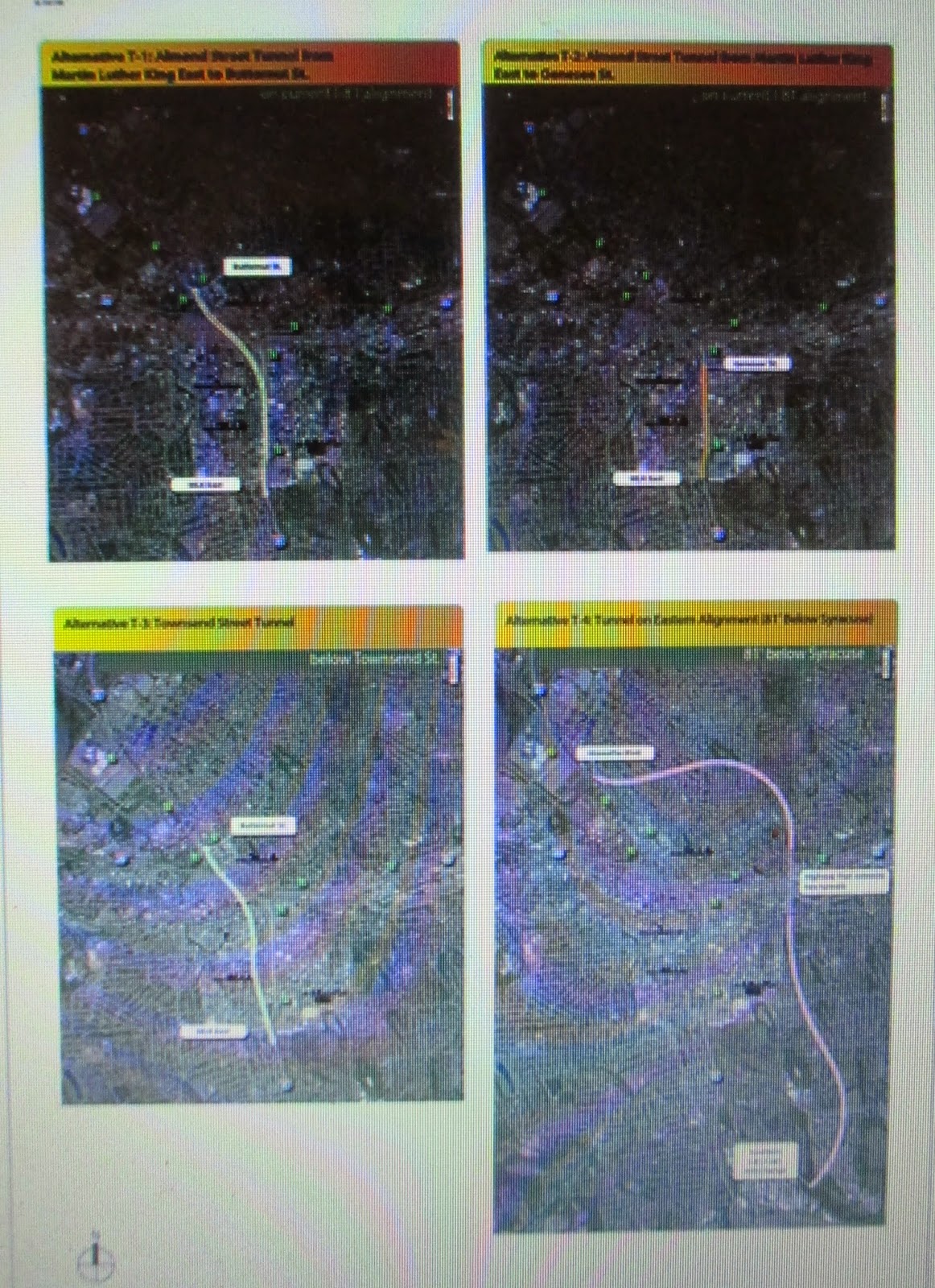 Of the 4 tunnel options, 3 are cut and cover, with 2 that follow the existing I-81 right of way, yet have their roofs some 20 feet below ground, significantly deeper than simply a lidded trenched freeway.

The 4th tunnel option is moled-drilled, way to the east on a far longer and deeper route.

The official planning in 2014 concluded:


a tunnel would be prohibitively expensive

Depressed highway would create a new barrier that
would be more difficult for cars and pedestrians to cross
and create accessibility problems for people with
disabilities.


The least expensive tunnel - T-2 Almond Street Tunnel from MLK to Genesee Street - would cost $1.761 Billion, while the open trench and replacement viaduct options range from $1.4 to 1.75 Billion. 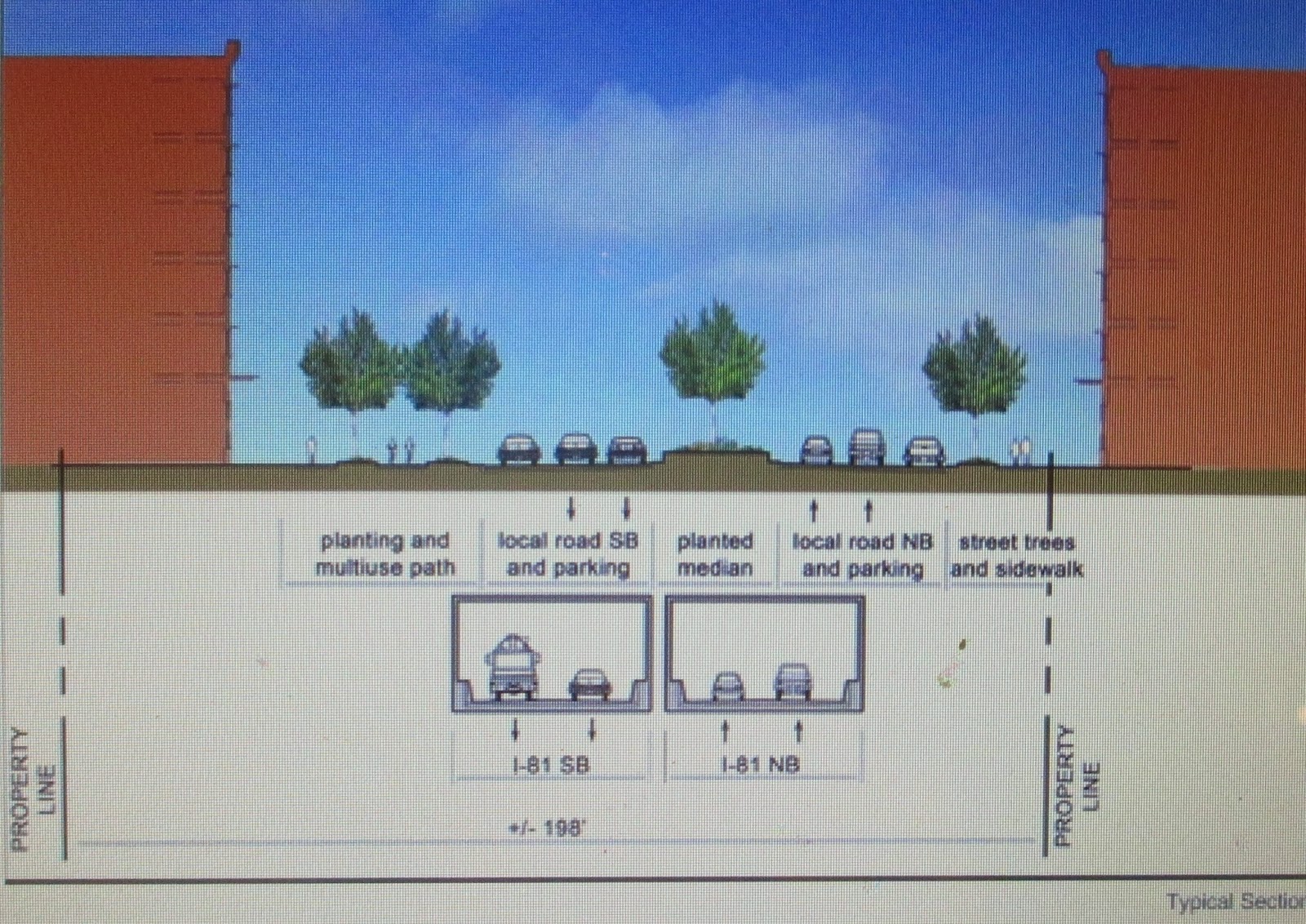 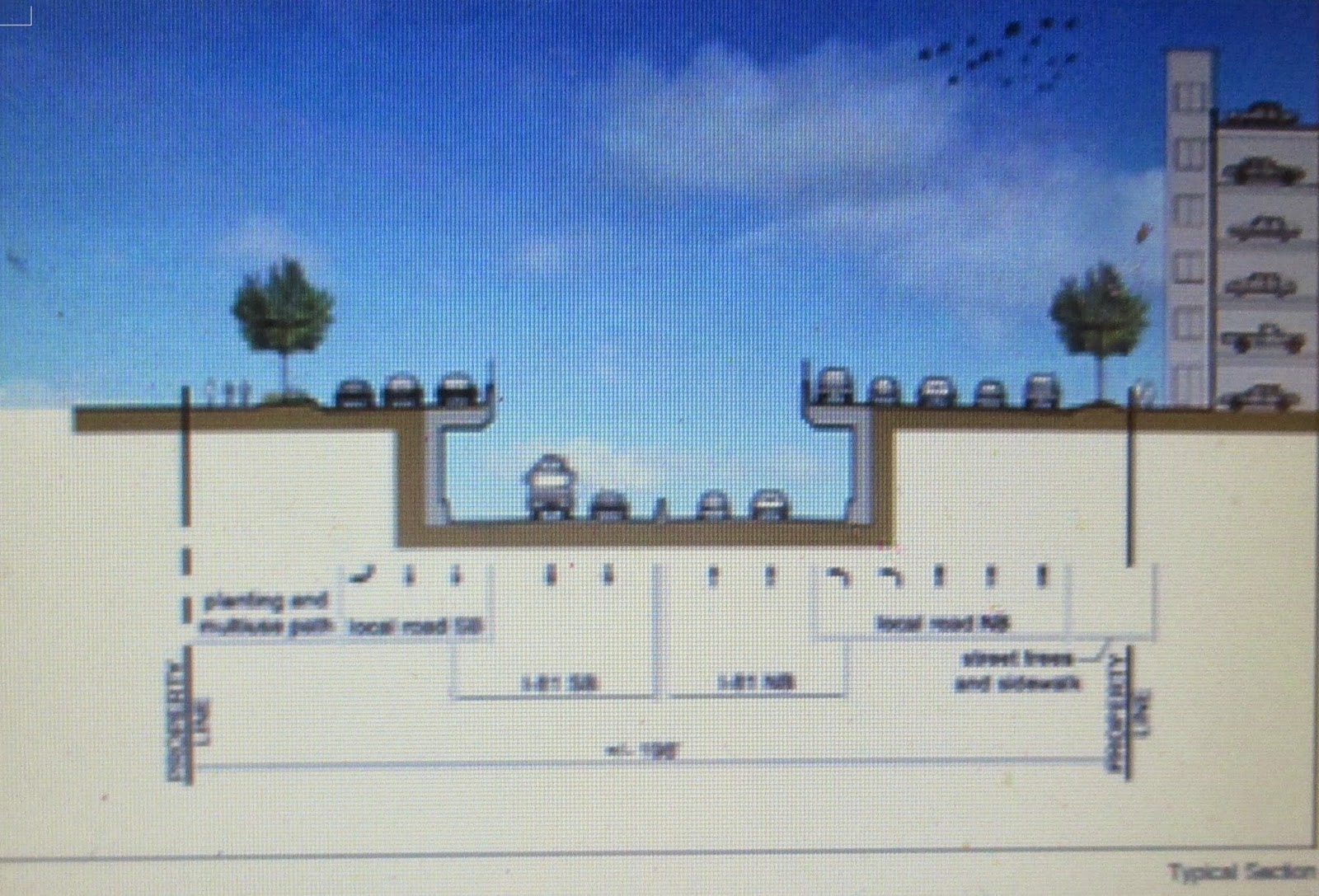 What about a shallow tunnel -  aka a covered version of the proposed depressed freeway?

The open trench option meanwhile is presented with zero consideration of adding a roof.

Note the two options that are roughly similar in length:


That represents a difference of $900 million between a tunnel and an open trench.

How much less would such an option to build a tunnel, but as a covered version of the shallower excavation of DH-1?

That would reduce construction costs over a deeper excavation, yet is NOT included in the study.

Nor were any options for a depressed freeway that is designed to support the subsequent addition of a roof thus presenting the option of spreading out some of the costs over time, like Cincinnati's I-71 Fort Washington Way.

But why maintain connections to an outdated elevated highway segment that will eventually need replacing?

If we are really serious about reconnecting downtown Syracuse, we would ultimately plan to do something regarding the eventual reconstruction of I-690, perhaps lowering that into a trench would could be covered over with parkland and new real estate development.  Imagine both freeways dropping underground to cross beneath N. Salina Street, with I-690 remaining below grade at least until N. Crouse Avenue?

Doing all of that now would likely be considered too expensive for a single project.

But why deny the opportunity to lower and tunnel the north-south I-81 segment.  And why hobble downtown Syracuse with major investments in ramp connections that sever the downtown for the existing outdated elevated downtown I-690 segment.

Instead, build a downtown I-81 Tunnel that disregards such connections and is of sufficient length to pass to the north side of I-690, that is, to Butternut Street.  Yet one that leaves space/design flexibility to add such connections later in a future project to lower that downtown portion of I-690: a latter project that could be partially funded by the sale of air rights over the newly lowered I-690 segment.

Such is the potential of a recent political initiative of a group of elected officials are challenging this study.

They are calling for a 'hybrid' option of a cut and cover tunnel beneath a new surface boulevard as the best of all worlds, via a design by Destiny USA. 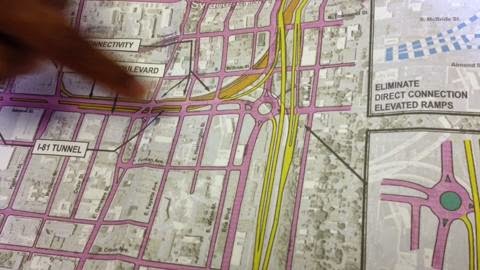 This design extends the cut and cover I-81 Tunnel north of I-690 to Butternut Street, as per the official "T-1" option.

However, it does so without the ramp connections to I-690.

(Thus this design eliminating most of the street severings- leaving only that for a one block segment of East Water Street, immediately next to an Erie Boulevard that would remain continuous, while providing a new traffic circle with its intersection with Almond Street.)

And it is about 1,500 feet shorter at its southern end, extending not to MLK Boulevard, but only to East Taylor Street.

Thus it should be somewhat less expensive then the $2.6 Billion of the "T-1" option. 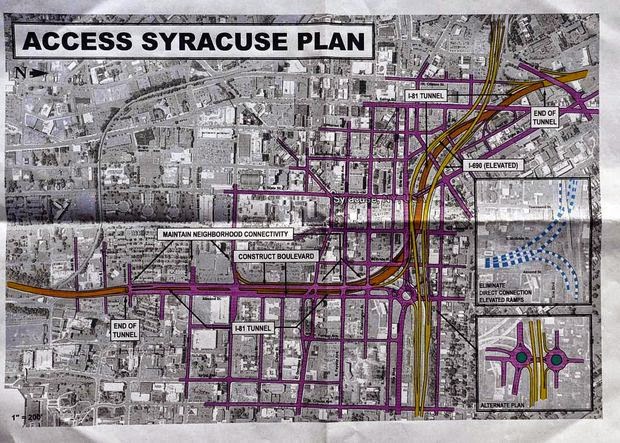 No word if this design has the shallow excavation of the trench options as "DH-1", or deeper as with the cut and cover options as "T-1".

If the authorities object to the lack of connections with I-690, they could deal with this in a staged manner:

- Construct a "u" turn ramp from I-81 nb to sb to the north, perhaps in the vicinity of West Court Street.  In conjunction with the already planned new flyovers from I-81 to the north and I-690 to the west, this would allow all of the movements of the I-81/I-690 interchange.


- incorporate stub connectors for direct connections into the new tunnel, perhaps fully building the I-81 nb to I-690 eb ramp, as the easiest to construct, with it emerging just east of Almond Street with some 1,000 feet to rise to merge with I-690 before North Crouse Avenue; and build the short segment of the I-690 wb to I-81 sb underground ramp that would pass directly beneath the new I-81 tunnel, but deferring its completion and that of the others to a future project to depress the downtown segment of I-690.


Such would eliminate the need to construct lengthy ramps that would sever the downtown street grid for connecting to an elevated freeway that would one day need replacing- and preferably lowing and covering.

The other ramp connections would be accomplished with the "u" turn ramp in the West Court Street area, in conjunction with the elevated connections between I-81 from the north and I-690 from the west.

Use some of the money from this design economization to make the downtown I-81 Tunnel wider with at least 3 or preferably 4 lanes per direction.

And keep an eye on the design to accommodate future projects to lower I-81 to the south and the downtown segment of east-west I-690.

The I-81 Destiny USA hybrid tunnel-boulevard plan is a definite step in the right direction.

A "U" turn ramp on I-81 a few blocks north of the Butternut Street tunnel portal, in conjunction to the new flyovers for I-81 to the north with I-690 to the west would provide the movements of the deleted directed connections of the Destiny Hybrid plan, making it quite workable.