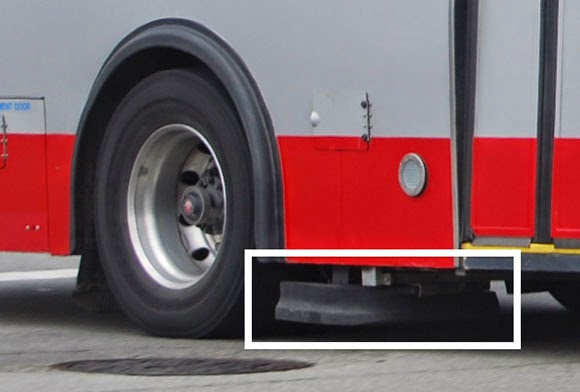 These are simple relatively inexpensive plastic and or rubber devices that are easily retrofit-table to existing trucks and buses.

Such devices could save many lives by preventing cyclists and pedestrians from being crushed by the vehicle's tires.

And they could even provide superior aerodynamics for such vehicles at freeway speeds, thus saving fuel.

We have already benifited from requiring the installation of such devices as metal frames on the rear of large trucks to prevent errant vehicles from sliding beneath. 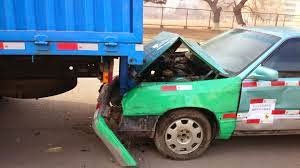 Technically called a Rear Under-run Protection System (RUPS), this is a rigid assembly hanging down from the bottom rear of the trailer, which is intended to provide some protection for passenger cars which collide with the rear of the trailer. Public awareness of this safeguard was increased in the aftermath of the accident that killed actress Jayne Mansfield on 29 June 1967, when the car she was in hit the rear of a tractor-trailer, causing fatal head trauma. After her grisly death, the NHTSA recommended requiring a rear under-ride guard, also known as a Mansfield bar, or an ICC bar,[14][15] but the trucking industry has been slow to upgrade this safety feature.[16]

The bottom rear of the trailer is near head level for an adult seated in a car, and without the under-ride guard, the only protection for such an adult's head in a rear-end collision would be the car's windshield. Because of the height mismatch between a passenger car bumper and the much-higher height of the platform of a trailer, the car's protective crush zone becomes irrelevant and air bags are ineffective in protecting the car passengers, if the under-ride guard is missing or inadequate.[16]


In addition to rear under-ride guards, truck tractor cabs may be equipped with a Front Under-run Protection System (FUPS) at the front bumper of the truck. The safest tractor-trailers are also equipped with side under-ride guards, also called Side Under-run Protection System (SUPS). These additional barriers prevent passenger cars from skidding underneath the trailer from the side, such as in an oblique or side collision, or if the trailer jackknifes across the road. In addition to safety benefits, these under-ride guards may improve fuel mileage by reducing air turbulence under the trailer at highway speeds.

Another benefit of having a sturdy under-ride guard is that it may be secured to a loading dock with a hook to prevent trailer creep, a movement of the trailer away from the dock, which opens up a dangerous gap during loading or unloading operations.[17]


Yet U.S. federal Officials at U.S. National Highway Traffic Safety Administration are delaying the implementation of safety standards requiring the deployment of plastic and or rubber guards to reduce pedestrian and cyclists deaths and injuries.

Posted by Douglas Andrew Willinger at 9:00 AM